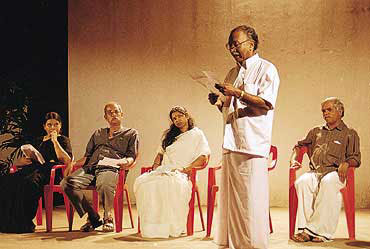 War Pieces
Paatini, a women’s group in Chennai, was not making any claims to "artistic innocence", but it learnt quite a lesson on how British foreign policy could affect a creative reading of Sri Lankan poetry. The group was to perform Surya Mukham, Eelam Tamil poetry interpreted through a combination of theatre, dance and music, at the British Council on October 11-12. But the Council developed cold feet after the Afghanistan bombings. They backed off at the last minute, citing security reasons.However, British Council’s loss was Max Mueller Bhavan’s gain. Lending their skills to the show, directed by Prasanna Ramaswamy, were poets Inquilab and Kanimozhi, theatre veterans Mangai, Preetam Chakravarty, and Muthuswamy, and danseuse Anita Ratnam. In a reading, which otherwise talked about strife and suffering, Ratnam’s interpretation of Cheran’s Kadhal Vari, which depicts a copulation scene as a homecoming of sorts, was full of contrasting energy. It was an impassioned interpretation of an Eelam poet’s encounter with a blonde, white woman. "As an artist, I have to respond to what is happening around me," said Ratnam, adding: "The Eelam context may have seemed to have nothing to do with what is unfolding post-WTC, but through my dance I was able to relate one to the other."
S. Anand

Kamalahaasan is ready with his techno-driven Aalavandaan but the producers are dithering over the film’s release. Initially, it was to hit the screens on September 28 but that would have meant just a 46-day run till Diwali, a crucial day when the exhibitors would have yanked it off from important cinemas to make way for the newer flicks. And the unwritten code of the filmdom is that a star’s film has to run for 100 days whether people watch it or not. Now Kamal fans will have to wait till Diwali. But there’s a catch here as well. By Pongal (January 14) Alavandaan would have to again make way for other films, after completing only a 60-day run. So has the actor miscalculated? Not really. Pammal K. Sambandam, where Kamal is paired with Simran, would also be ready for a Pongal release. Kamal makes way for Kamal.
S. Anand