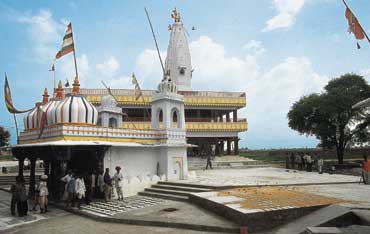 Such threats of violence are rife in the air as an uneasy calm prevails in Asind (population: 18,500 approx). Communal animosity gripped the town when a mob of Hindu lumpens burnt down tents erected as usual for the annual Urs celebrations in the Badai dargah near the town's Sawai Bhoj temple complex on July 27. As news reached the town's shanty bazaar, angry Muslim men reacted by burning tyres, shutting shops and vowing revenge. Then, ugliness ran riot as the Hindu mob razed to ground a 16th-century mosque (where no prayers were regularly offered), abutting the Sawai Bhoj temple. A marble platform was built and an idol of Hanuman hurriedly installed at the site of the demolished mosque. And the freshly-built temple was provocatively christened Mandir Peer Pachhar Hanumanji (Temple of Lord Hanuman who defeated a Peer-Muslim saint.)

A week later, Asind was inundated with policemen, district officials, human rights activists, politicians and journalists. Enough to unnerve this little-known town. Perhaps, as some Hindu residents crib, it even hyped up the hostilities. The idol of Hanuman was duly shifted, but not very far. And the temple trust has taken to referring to the demolished mosque as "The Wall".