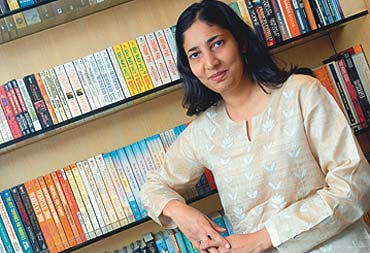 outlookindia.com
-0001-11-30T00:00:00+0553
Kiran Desai's Inheritance of Loss is a joyride. It's a coming-of-age novel that evades puberty: its dreamscape is an adult's idyll of childhood, beautiful and utterly unreal.

Sai, orphaned at 13, is plucked from a chilly convent, and sent to Kalimpong to live with her grandfather, old Judge Jemubhai Patel. It's a frozen household, except for the cook who is Sai's uneasy bridge to the alien world of Kalimpong. Her other companions are a battered bunch of ageing Anglophiles. What else can she do at 17 but fall in love?

Gyan, 20, brilliant, subversive is uneasy in this deodorised version of teenage love. There is no anguish. There are no terrors, even when the GNLF erupts around Sai's safe amnion. The novel's second thread is the tale of the cook's son Biju, an illegal immigrant in the US. This trans-continental drift of kitchen confidential ought to have been tragic, but it stays cruelly antic even to the malicious finish, almost as if the author (echoing Sai) is punishing the cook for loving his son. Despite seizures of voluptuous prose, the novel has an icy clench: everybody is safe in his or her cocoon. The denouement is stated, rather than felt. Sai confronts the reality of Gyan's world with a perceptible cringe. There's an abyss here, and neither the writer nor the reader can quite dare that leap of faith.

The book is narrated from the vantage of a traveller in an antic land. Sai's thoughts on the cook define the book: "...their friendship (was) composed of shallow things conducted in a broken language for she was an English-speaker and he was an Hindi-speaker. The brokenness made it easier never to go deep."

Inheritance is the kind of book you'd wish on a young adult who has recently been devastated by Jane Eyre. It's lavishly pretty and practically pain-free. But if it is worthy of a prestigious literary prize, perhaps we ought to rethink the term 'literary'.

"I Don't Feel Any Different"