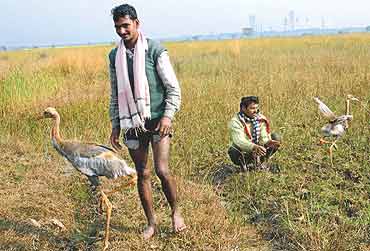 outlookindia.com
-0001-11-30T00:00:00+0553
A few skeletal buffaloes chewing on dirty hay and a half-barren field dotted with yellow mustard is all 'Pappu' Sitaram Gujjar has to scrape by on this winter. The milk from his emaciated beasts just about helps this cattle grazer feed his large family of eight. In this lonely outback of Kota, Rajasthan, he faces hunger, cold and deprivation. But Pappu is a giver. His charity begins outside his home, as he feeds handfuls of jowar grain to a pair of Sarus cranes that lives on his patch of land beside the Chambal waters.

Each day while cycling 55 km to Kota to sell milk, this class 7 dropout leaves his bicycle by the canal to scan the fields for those tall red-headed cranes. After filling in his bird diary late at night, he lies on his khaat listening for the slow korr-korr of returning bird pairs, before allowing his tired lids to drop shut; content that the cranes have landed.

Pappu is part of a rural Sarus Protection Group which has banded together to help save these birds. The Sarus is enshrined in Indian myth and history—it figures in Valmiki's Ramayana, it was a bird sheltered by the Buddha, and adored by emperor Jehangir for its lifelong fidelity to its mate. But in real life now, it is a threatened species. Today, this five-year-young village protection movement is keeping Kota on the map. Not the concrete Kota crammed with IIT coaching classes or the handloom art destination known for its saris and its school of miniature art, but a Kota that is still one of the few Indian townships where you can spot endangered Sarus cranes just 12 km from the city.

And what makes these Sarus saviours stand out in this green, agriculturally rich belt is that they are neither rich farmers nor landlords but just marginal, daily-wage labourers, or ostracised tribals along with their barefoot empty-bellied children, who don't earn a paisa for their good deeds. Like, when they pack grass around nests during floods to prevent inundation, or when they fan out to prevent egg stealing, or when their sighting data fills up a unique rural avian almanac dedicated to the world's tallest flying bird. 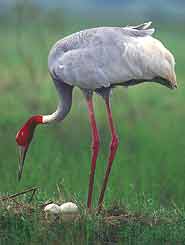 For most of them, defending the fate of these birds is a natural act. Be it schoolteacher Brij Mohanji, who paints Sarus murals on walls, 10-year-old Surinder who notes down his uneducated father's sightings, or daily-wager Amarlal who claims that he only gets a day's work after hearing the birds' morning call. "Kota is one of the few places in India where the Sarus regularly breeds twice a year," says Jatinder Kaur, a wildlife scientist. She began her fieldwork in Kota in 2000, when chick survival was down to zero due to egg-stealing. Convinced that this species would not be able to survive here, since migrant labourers were stealing eggs for use as a fever reliever and farmers were destroying nests on their land, Jatinder initiated this community protection project. She was hoping that a neighbourhood watch would help save this birdland, where cranes reside in unprotected marshes along the canal and barrage that were built on the Chambal 30 years ago.

But with no major funding in hand, all Jatinder could tap was the traditional love of the Sarus, revered as a symbol of fertility, and the belief that killing this bird is "paap". Reawakening these values, Jatinder and her spouse Anil Nair constantly travel through the 250 sq km of Sarus land in their beat-up old jeep, giving talks and organising slide shows. Reaching out to some 550 children in seven schools helped filter the attitude back to adults. Now schoolchildren and adults monitor key breeding sites in areas like Lakhawa, Ummedganj and Haripura. Territories are divided between watch groups like Amarlal-Gajanand-Brijmohan who monitor 25 sq km between them on foot, cycle and a motorbike in Sorsan village. Within five years, egg-stealing is down to zero. Last summer, 13 chicks fledged successfully, raising the crane count here to 70 birds. And this season, six adorable cinnamon-feathered heads are popping up among the mustard and wheat fields, confirming the crane gain in Kota.

Today, this part of the Chambal river is becoming known as goodlands—a far cry from the reputation that clings to some of its other ravines that have sheltered the country's most dreaded dacoits. In many villages, these avian pairs are prime objects of local pride. Walk anywhere along the canal, marshes and ponds, and you only have to say Sarus before villagers point at where these wetland mascots can be found. Vigilance has become a way of life. Sometime ago, when Pappu noticed a labourer walking about with suspiciously stuffed pockets, he stopped him and fisted him for stealing eggs. Another villager, Ali Mohamed, virtually became a martyr for the cause: he died under a crane-hunter's fire. 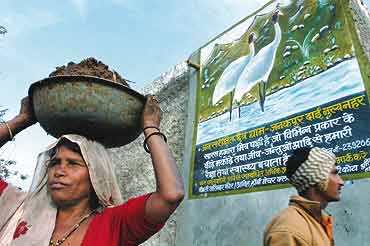 Last June, nine villagers got awarded with certificates, bird books and raincoats for their watchful efforts, while schoolkids who won wildlife quizzes got notebooks and pens. "Their giving is from the heart," says Jatinder. "I can't even give them money for phone calls, yet villagers call me all the time from PCOs to report their sightings." Adds an exultant Gopi Sundar, research associate of the International Crane Foundation: "In pure conservation terms, this is surely India's most shining example of people protecting wildlife."

This conviction comes through in the voice of men like Latur Lal, a singhada (water chestnut) harvester, who monitors Sarus pairs in Ummedganj village and calls himself a "kudrat ka chowkidar", nature's watchman. Unable to afford a wristwatch, he still tells the time of the day by reading shadows. But his skinny chest swells with pride as he says: "First people laughed at me. Now they respect me." Prof B.C. Choudhry of the Wildlife Institute of India, an endangered species expert who has also advised Jatinder on this project, says: "By making people partners in conservation, if we can replicate this for 500 chicks in ten years, we will actually see an increase in the Sarus population by ten per cent." But for now, the marshy-splashy dance of the Sarus along these sprawling mustard fields makes these crane pairs Jodi Number 1 for all children in Kota.

'Many Hindus Are Leaving Pakistan'