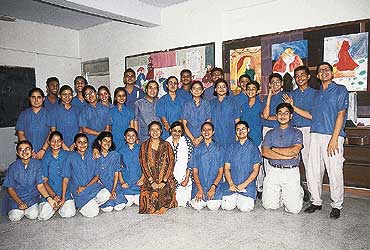 outlookindia.com
-0001-11-30T00:00:00+0553
Twenty-eight 14-year-olds, grouped together in random pairs, telling each other animatedly what they really think about themselves. About their strengths, their weaknesses, joys and fears. No inhibitions, no affectations, no embarrassment—just easy camaraderie and a free flow of expression. One has just been privy to the concluding session of a self-exploratory workshop at one of Delhi’s upmarket schools. There are more revelations in store: a whole range of such exercises—introspection, looking back and discussion—is part of the school’s curriculum, compulsory for students between 14 and 17.

Welcome to the Pravah-smile (Students Mobilisation Initiative for Learning through Exposure), an organisation which has reached out to over 30,000 students already in the Capital’s upmarket schools and colleges, helping them cope with life’s rigours. The prime mover behind this unique project is 34-year-old Ashraf Patel. Aided initially by a seven-member think-tank from the development and corporate arena, Patel has created a multifaceted curriculum that initiates urban Indian youth to practical decision-making within a complex context of social problems.

She and her team of dedicated workers, drawn from such diverse fields as theatre and social psychology, today work in about 25 schools and 30 colleges of Delhi with about 5,000 youth registering for their various programmes every year. Several schools including Shriram School, Sanskriti, Ramjas Public School and St Mary’s have made her vision a part of the compulsory curriculum.

Patel threw up a lucrative corporate career to follow her dream in 1994. The violence which followed the demolition of the Babri Masjid got her thinking about the values and intellectual framework that children today are growing up with.

Such a lofty idea didn’t remain in the realm of parlour chatter, though nothing had really concretised in her mind when Patel held her first workshop in Delhi’s Ramjas Public School. Says Patel: "In 1995, the Indo-German Social Service Society helped me out with a small grant and in 1996 I got the Ashoka Fellowship. The recognition gave me a lot of confidence and access to extensive networking in the field of education."

Today, seven years later, her dreams have taken shape. Pravah’s curriculum begins where most schools and colleges stop. It does so by walking students through three-stage personality development (From Me to We)—looking closely at values and attitudes, investigating creative problem-solving and communication skills and exploring leadership incentives; the second stage ‘Together We Move’ involves students in effective interpersonal interaction. The first two stages lead to the critical third one, ‘We are the World’, during which students are introduced to topical issues and societal trends (communalism, violence, environment, gender relations, challenging stereotypes and myths). Students are then encouraged to volunteer in an organisation for a week during their annual vacation.

At the college level, the programme draws students through workshops in theatre, music and behavioural exercises. After an orientation programme, students are placed in various community organisations for hands-on participation. Nidhi Pant of St Stephen’s College, who went to the Narmada Bachao Andolan as part of Pravah’s exposure programme, says: "There’s so much to learn, see, work and feel. I am not sure that I have still understood what the nba is all about but I feel proud that unlike many others I’ve at least the urge to explore the system and look for answers."

Pravah intends to have its model approved by the cbse and incorporated as part of the regular school curricula across India and parts of south-east Asia. Says Jaya Iyer, team-leader for the college programmes: "The idea is not to make social workers of the youth of today but social changers of tomorrow."