My ministry will work in candlelight. But, with the ACs on.... 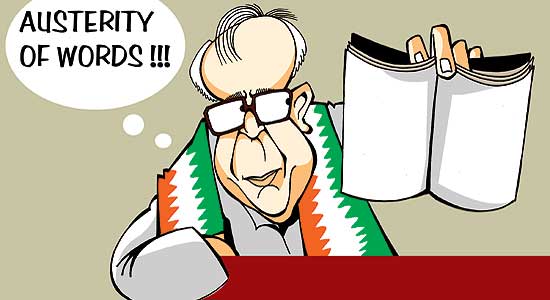 Gosh! This austerity drive that I triggered off is driving Congressmen over the edge. Suddenly, after I ticked off external affairs minister S.M. Krishna and his junior Shashi Tharoor for their five-star ways, everyone wants to prove their commitment to spending less. On flights, the economy class has suddenly become the new executive class (for it’s packed with VIPs). I understand that regular passengers are even being upgraded to accommodate the netas. In fact, strange things are happening. On a recent flight to Mumbai, I spotted Sharad Pawar sitting across two seats. “Pranabda,” he said apologetically, “I am just putting Praful Patel’s seat to good use. I have checked him in as accompanied baggage. So you see, I’m not wasting any money.” Then, the other day, on a flight to Calcutta I was told the two voluble Congress spokespersons—Manish Tiwari and Abhishek Singhvi—had disguised themselves as large-sized suitcases and were travelling in the hold where there are no inflight services. Anyway, they were smart enough to pack some dinner from the Taj. On arrival, they promptly held a press conference to extol the virtues of austerity.

Here I must put it on record that economy class travel may be politically correct but it has a downside. Last week, on a flight from Hyderabad I asked the air hostess for some national newspapers. “You get only local papers in economy,” she said rather curtly. “Do you know I am Pranab Mukherjee?” I asked a tad angry. “Arre, these days every balding Mukherjee with thick-rimmed glasses is claiming he’s Pranabda,” she shot back. I was furious. “Do I have to show you my ID card?” I asked. But her comeback stunned me: “Sir, those who show their ID at the drop of a rosogolla must suffer from an identity crisis.” Frustrated, I settled down to reading an inflight pamphlet about how the airline pampers executive class passengers....

Now, I hear the austerity bug has reached manic levels in the MEA. Why, Krishna has directed that henceforth only Old Monk rum be served at MEA dinners instead of Scotch. And all banquets be hosted at the rundown Delhi Press Club. Lok Sabha speaker Meira Kumar is contemplating handing over catering in the Parliament canteen to some streetside joint. Tharoor wants to switch to travelling in DTC buses while his security follows in his fancy cars. Everywhere, Congressmen are replacing the expensive with things cheaper. So gone are the Patek Philippe and Cartier watches. The ever innovative Kapil Sibal has even installed a sundial at his residence. But what topped the austerity fortnight was Veerappa Moily’s missive that those not wearing belts invest in one. How else can one tighten one’s belt, he asks?

Finally, you may ask, what is Pranabda doing to show his austerity and lead by example? Well, for starters, my ministry will work in candlelight. But, with the ACs on....