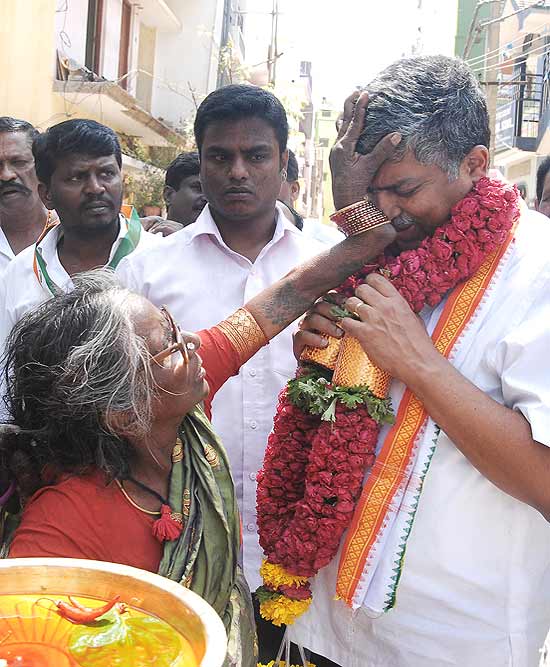 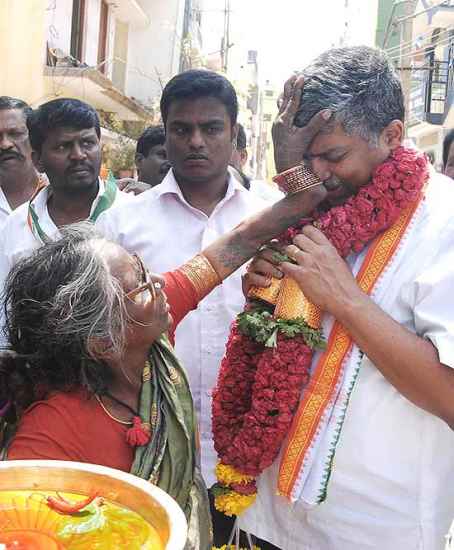 Nandan Nilekani, who helped create the Infosys brand, has moved out of his comfort zone to fight an electoral battle. On paper, he’s a greenhorn, fighting on behalf of the Congress, the veteran Ananth Kumar, national general-secretary of the BJP in the Bangalore South constituency. But in a way, he’s taking on brand Modi. This is something acknowledged even in the BJP. Says a senior BJP leader, “It’s Modi who is fighting Nilekani. Ananth Kumar’s power comes from Modi, whose nomination as prime ministerial nominee he had opposed, being close to Advaniji.” Another leader puts it thus: “It’s funny when you think of it. Ananth Kumar is fighting his five-term anti-inc­umbency with help from Modi.”

This is not lost on Nilekani. As he formally launched his campaign, he said, “It speaks volumes about the achievements of an MP elected for five terms when he takes shelter under Modi.” The comment reflects, to a certain extent, the anti-incumbency that BJP MPs from Karnataka—18 in all, the most from any state—are facing. Conveniently, they have all opted to use Modi as a mascot in the hope of getting past the post. But it won’t be an easy task for Modi either. No doubt there is a Modi wave, at least in the urban areas. But it’s seriously under threat from caste equations, which, played well, power a win.

That was the route the BJP took to win in 2009. B.S. Yediyurappa had rallied the Lingayats and also broken into the ST votebank of the Cong­ress. Drawing on the money power of the illegal mining lobby, he had reduced the Congress to six seats out of 28, with the JD(S) taking three seats. (Byelections changed the figures to BJP 18, Congress 9 and JD(S) 2.) The first BJP state government in the south had also delivered the most LS seats from any state to the BJP. But the corrupt rule of the “medieval monarchs”, as a senior bureaucrat had once described the government, ended in 2013 because Yediyurappa fell out with the party, was displaced, and set up his own Karnataka Janata Party (KJP). His scams did not matter to the people: his fledgling party secured a record 10 per cent of the vote in the 2013 assembly elections and a considerable section of the Lingayat vote also went to the Congress, which regained power. 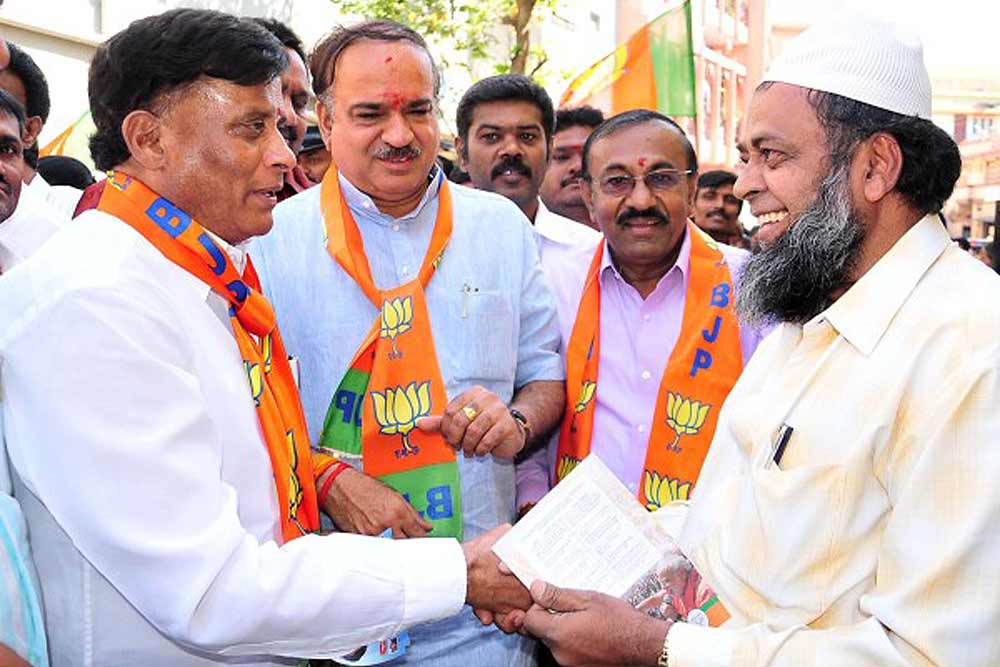 Hoping to hold Ananth Kumar on the campaign trail

It was the caste combination galvanised by present CM Siddaramaiah—wooing OBCs, SCs, STs and the minorities—that helped the Congress win 121 seats in the assembly and end what had come to be known as the “Lingayat raj” of Yediyurappa. The BJP realised that the only way to counter this was to get Yediyurappa back, which would also re-establish its hold over northern Karnataka, where Lingayats are the dominant community. This was the thinking of leaders who mattered in the central leadership. But then there were Advani and Ananth Kumar, determined to keep Yediyurappa away.

Everyone seems to know that though there is a Modi wave, what will ultimately matter in a victory is caste equations.

It required a Modi to appear on the scene to steamroll the central leadership into readmitting Yediyurappa back into the party. At one point, when the Ananth Kumar group was busy blocking all positions and delaying Yediy­urappa’s entry, an associate of Modi is learnt to have remarked: “What Modi factor or wave are you talking about? It is ultimately going to be caste. And it is Yediyurappa who will bring those votes because of the support he has among Lingayats.” To be fair to this associate of Yediyurappa, he is not wrong: leaders of both the BJP and the Congress acknowledge that this is going to be an election quite different from previous ones.

They all agree that Modi has become popular in the towns and the cities but differ on whether this will convert into votes. In the rural areas, the Modi sentiment is countered by the Congress not with the programmes of the UPA government but with Siddaramaiah’s own Annabhagya scheme, which disburses cheap foodgrain, and the Ksheerabhagya scheme, which provides milk to school children daily. “But there’s one problem,” says senior Congress leader. “Sidda­r­amaiah’s government is like Manmohan Singh’s in some ways. Neither he nor our party workers had gone to town popularising the fact that these programmes are different. We have not claimed ownership of these programmes.”

Similar is the story about the rights-based legislation in the utilisation of budgeted funds for the SC and ST sub-plans. This legislation even has a clause that says officials found not utilising the funds for the purpose assigned could face imprisonment. But more important than this is a politically significant point that is being put across by the Congress campaigners to consolidate the social axis, popularly known as the “Ahinda vote”, an acronym to describe the OBCs, the minorities and  the SCs and STs. The reasoning is that if the Congress does not improve upon its previous tally and score at least 15 seats, the position of Siddaramaiah as CM will be in jeopardy. The biggest OBC constituent of Ahinda is the Kuruba or shepherd community, to which Siddaramaiah belongs. The Kurubas plus the Muslim vote constitute a considerable chunk in a little more than half a dozen constituencies. Add to this some sections among the SCs and OBCs. (Of course, the Lingayat votes gained in the assembly election will get cancelled out in the wake of denial of budgetry grants to community institutions that Yediyu­rappa had gallantly granted.) In short, the caste factor could well thwart any other sentiment.

So if leaders of both the major parties insist that it is a close fight and mark 18 to 19 constituencies in the “marginal” list, two conclusions can be safely drawn. One is that the Modi sentiment awaits the turnout of first-time voters, hoping they will put their fingers on the lotus on the voting machines. Two, Karnataka could well be bucking the national trend of voting against the Congress as the state had in the past during the regime of Devaraj Urs, the man who created a niche for himself and the Congress party by bringing the backward classes and minorities toge­ther. Twelve days before polling, the BJP and the Congress are talking about an equal number of seats, leaving one or two for the JD(S). It could well be a couple of seats more or less as the day of reckoning approaches—unless sometime drastic happens.

Imran Qureshi is a senior journalist

Take The Rupee Out Of The Kilo