Vajpayee is talking in Urdu. Arun Jaitley is in. Narendra Modi is out. Ayodhya has become mythical. Electricity, water and roads are the raging issues. Is the party changing its colours? Updates 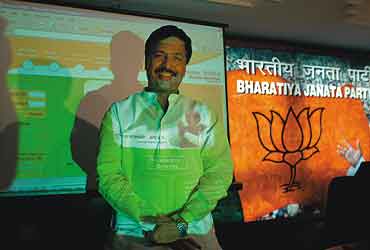 The BJP's ambitions are soaring. Convinced that India Shining has been a success, the party believes it can strike electoral gold by metaphorically linking its fortunes with that of India. The new thrust of the BJP's election campaign, to be first unveiled in the party's Vision 2004 document slated to be released later this week, will therefore call India a superpower. No less. The idea is to take the Resurgent India, Shining India themes to the next level of aggrandisement. If India Shining showcased the past "achievements" of the BJP-led NDA government, the "superpower" catchline holds out promise for the future. Party chief Venkaiah Naidu puts it almost lyrically: "Under five more years of BJP rule, India will reclaim its position as vishwaguru, the world leader in the sciences, the arts and the economy."

Whether India becomes a superpower or not, there's no doubt that in a remarkably short time the BJP has gone from a raw sledgehammer force to a nimble-footed pugilist adept at playing pre-bout mindgames. Its crop of young leaders are rewriting the rules of the election game. They are taking the art of political spin to a new level, always a step ahead of the Opposition, forcing it to a perpetual reactive mode with constantly shifting lines of propaganda. Several weeks before polling day, they have been successful in creating an all-round hype that they are the winners of election 2004 while Sonia Gandhi is the big loser.

Ever since the BJP came to power, the party of trishul-wielding sadhus, sants and masjid-wreckers has undergone a quiet transformation. Today many would identify the BJP with the moderation of Atal Behari Vajpayee. It is also a party increasingly associated with modernity, with articulate middle-class icons like Arun Jaitley and Pramod Mahajan, the political managers par excellence. Election 2004 marks an important generational change in the BJP, with the nuts and bolts of the campaign handed over to the second generation.

Along with Vajpayee the Sophist, it is this lot that is creating what may be called the New BJP. Says a party strategist: "The parallels can be drawn with New Labour. But while New Labour involved completely giving up the old agenda, there is greater continuity in the BJP's evolution." More than anything else, it is the party's effort to shift from the extreme right to a little more towards the centre of an urbanised Indian politics that lies at the core of this transformation. As Arun Jaitley puts it, "The idea is to reposition the rival. The BJP already occupied the Hindutva right-wing space. Now we are increasingly claiming the centrist agenda. The only space left for the Congress is to be pushed towards the left agenda, which can only be fringe and marginal in India." 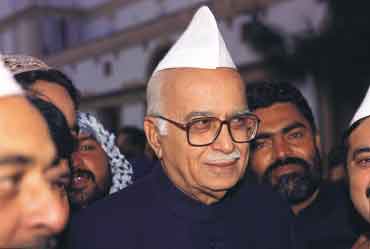 This is backed up by hard-nosed pragmatism. That the BJP held a minority development conference last week at Delhi's Talkatora stadium made a statement about the party's repositioning. The induction of a high-profile Muslim politician like Arif Mohammad Khan was also designed to soften the party's anti-minority image. A BJP leader now says: "If it wasn't for Gujarat there would have been no talking point against us. Except for the Gujarat boys, the whole party realises what happened is a blemish on our record." At the minority meet, the BJP's Muslim "showboy" Shahnawaz Hussain publicly said so: "There have been so many riots during Congress rule. Only one took place during our rule. Now a Muslim who joins the BJP does not have to put up with insults and ridicule...." 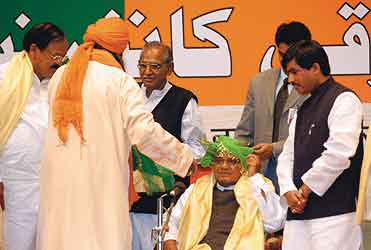 Maybe not. But a Muslim supporting the party is still an oddity.Why then is the BJP reaching out to the community, going to the extent of releasing costly advertisements in Urdu publications? Not because the party expects Muslims to suddenly start voting for the 'kamal' but because a close scrutiny of voting patterns has revealed that tactical minority voting against the BJP has cost it several seats in a narrow contest, particularly in Uttar Pradesh. The idea, therefore, is to ensure that Muslims do not vote against the party, if not for. Pramod Mahajan is candid: "There will be no minority-bashing in this election."

The peace initiative with Pakistan nicely dovetails into this strategy. Never one to lose a political opportunity, the PM informed the minority conclave: "I never miss a occasion to be among Muslims." He then expanded on length about his Pakistan initiative and even made a veiled criticism of the US. He appeared well prepared for the occasion, wearing a kurta pyjama, instead of his usual dhoti, and liberally peppering his speech with Urdu words like wazir-e-azam and aman. It became clear that the upcoming electoral battle will not see BJP notables making references to Mian Musharraf and stirring the Muslim-Terrorist-Pakistan cauldron.

The impulses to tone down its extreme agenda and shift to the mainstream are hardly noble. It is a strategy derived from political expediency. For the BJP's avowed Hindutva ideology, with its ugly Muslim-baiting underbelly, has always been highly utilitarian. The party cranks it up only when there are clear electoral gains to be made. And more than any ideology, the movers and shakers of the New BJP are committed to winning the political game. They are pragmatists to the core, using Hindutva only when there is an emotionally charged atmosphere and a mechanism to convert this sentiment into votes.

The BJP believes that while the Ram temple movement helped launch it as a major player, its growth has been largely due to the decline of the Congress on the national stage. BJP national executive member Seshadri Chari is candid: "If you study the BJP's growth, you will find after the Ram temple agitation there were only two instances when the Hindutva agenda clicked electorally. After Mulayam Singh ordered the firing on kar sevaks and after the Godhra carnage in Gujarat. Both times the atmosphere was surcharged and there was a sense of Hindu grievance."

It was after the 1993 defeat in the Uttar Pradesh assembly poll that the party realised stridency could fetch it no further electoral returns. The calculated search for allies and incremental votes began. Today with Vajpayee at the helm, the BJP is still travelling down that path. The results of the recent assembly polls also strengthened the argument in favour of a bijli-sadak-pani agenda. It helped that, according to several indicators, the Indian economy was in pretty good shape. Hence the decision was made: the sole emotive issue in Election 2004 would be Vajpayee's image; the party would fight the big electoral battle on a governance agenda. Arun Jaitley says: "It is the Congress that is now trying to use the emotive appeal of the dynasty and Rahul/Priyanka while we are talking of development."

The strategists of the New BJP believe they have all the assets the Congress once had. A leadership cult around Vajpayee on the lines of that around Indira Gandhi; a feeling that there is no alternative (TINA) to the NDA; and a centrist agenda that includes peace with Pakistan and continued economic liberalisation.

The economic agenda of the leaders of the New BJP also makes them different from the swadeshi-touting leaders of the old Jana Sangh and early BJP. With exceptions like Murli Manohar Joshi, most prominent leaders in the BJP remain committed to economic liberalisation.They can best be described as right-wing free marketeers. "Most of us believe in less, not more government, in the economic sphere," says Jaitley.

But more than anything else what motivates the new breed of BJP politicos is a burning ambition and the belief that they can make it to the top. As Mahajan says, "We know that we will be rewarded if we deliver. I believe the Congress is in a mess because it is sycophancy that is rewarded while everyone knows that the dynasty will inherit the party."

Today, all the Young Turks are on an overdrive. Venkaiah Naidu marks a big change from geriatric BJP presidents like Kushabhau Thakre and Jana Krishnamurthy and can be credited for working the party machine in tune with the government, unlike the sulking old guard that sat at one remove. "The PM and the dpm have given me and my team a free hand to manage the election," he says. And they seem to be doing an excellent job of it. Even before the poll notification, 10 leaders have been identified to address 100 rallies; and 75 interactions with opinion-makers will take place in state capitals. Naidu himself is constantly on the move, often visiting three different cities in one day. He's also a great believer in new technology and has set up tele-conferencing facilities in his Delhi office through which he can simultaneously converse with partymen in 27 towns. The BJP's media cell, under Mukhtar Abbas Naqvi, is also being spruced up. TV personality Nalin Kohli, now joint convenor of the media cell, has spruced up the web-site and will soon be busy in the TV monitoring room where the news channels will be tracked on ten TV screens.

But it is Mahajan who is the BJP's technology man. As the main campaign manager, he and his team intend to use every technological device available. Of the 60 crore voters in the country, he believes he can reach 20 crore via telephone, TV, radio and sms. Vajpayee has already recorded a message that Mahajan claims will reach "almost all" residential phones in the country. By this week a call centre would have been set up. Dial 3030 and the caller can hear the PM's message. There's more to come for what he calls the Y2K4 generation: advertisements on mtv and Channel V, BJP T-shirts and caps.

Whether GenNext changes the essential nature of the party can be argued for weeks to come. But they will certainly change the way elections are fought in India. If the battle of the ballot goes in the BJP's favour, the change and transformation of the party will be accelerated. In the event of failure, however, a regression cannot be ruled out.

A Belief To Vote For