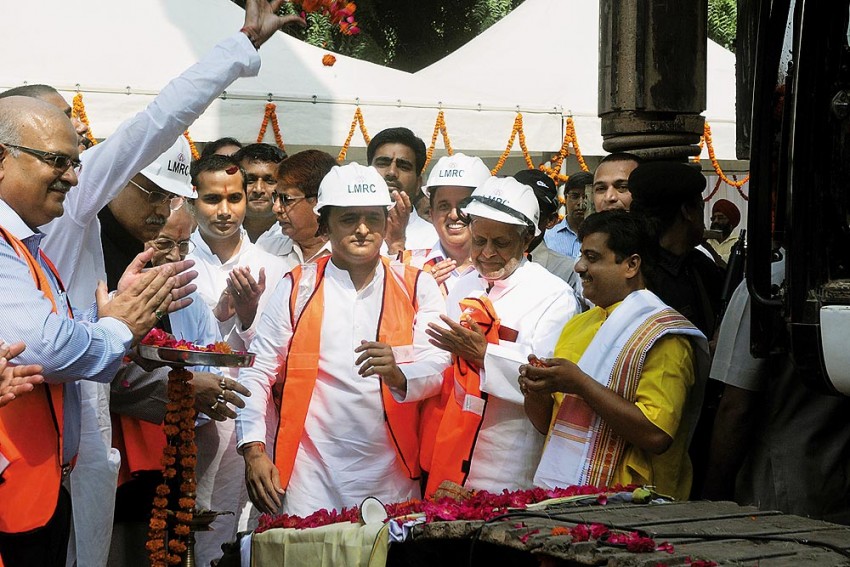 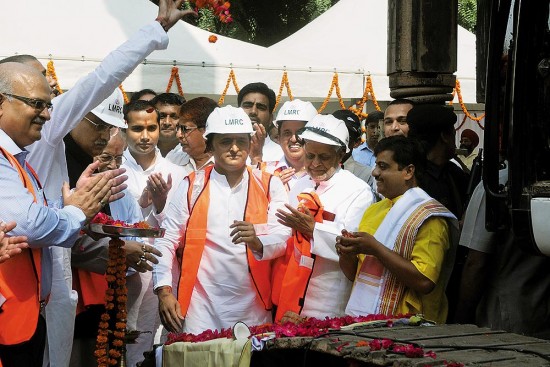 At the spiffy office of the Lucknow Metro Rail Corporation (LMRC), they have put up a countdown clock. Similar clocks tick away to the deadline set for project completion at the UP Industrial Expressway Author­ity, entrusted with the task of building a six-lane Lucknow-Agra expressway,  and at the offices of the international cricket stadium, besides the LMRC office, which will oversee a makeover of the capital.

The installation of these clocks is a clear hint that chief minister Akhilesh Yadav wants to shake off the tag of apathy and show he means business. It seeks to signal a shift of gears, showing the chief minister in combat mode, keen to complete every big project he is passionate about, eager to prove his critics wrong and set a new trend in a state where many a project is begun only to be abandoned. Having drawn much flak for allowing himself to be dominated by his father and uncles, Akhilesh now wants to prove himself. And he knows he has to show some action before elections in March 2017. Already he has lost time since 2012, when he led his party to a victory even Mulayam Singh Yadav could not muster during his three stints as chief minister.

The wake-up call may have been the May 2014 Lok Sabha elections, when only five members of the Yadav clan could ret­ain their seats. And Akhilesh’s first assertive move was replacing chief secretary Javed Usmani with the dynamic, accessible and hands-on Alok Ranjan. Navneet Sehgal, another IAS officer, was brought on board to handle Akhilesh’s public relations and media presence. He made it clear, too, that industries, health and medical education would get sharper focus. Some hard decisions were taken: he dropped schemes like the unemployment dole, which he himself had launched on assuming office. Laptops, which were given free to anyone who cleared Std XII, were now given out under stricter criteria. More pragmatic, broad-based social initiatives were created: the Samajwadi Pension scheme, for instance, offers Rs 500 monthly, but Rs 50 is added on for those who immunise their children, send them to school and so forth. Targeted at 40 lakh beneficiaries, the pension can go up to Rs 750 monthly.

And large, high-visibility projects with transformative potential have caught Akhilesh’s fancy. Among them is the 301-km Lucknow-Agra expressway, which could reduce the travel time between the cities to four hours and make Delhi reachable in seven hours. Sehgal, who heads the project in addition to his task as principal secretary (information), says land acquisition for the project was completed in record time, without a whimper from 24,500 farmers, who happily accepted compensation adding up to Rs 2,700 crore. “The compensation was paid at four times the official circle rate for the area—which to my knowledge is unique in the country,” says Sehgal, who makes it a point to daily monitor every aspect of the project. 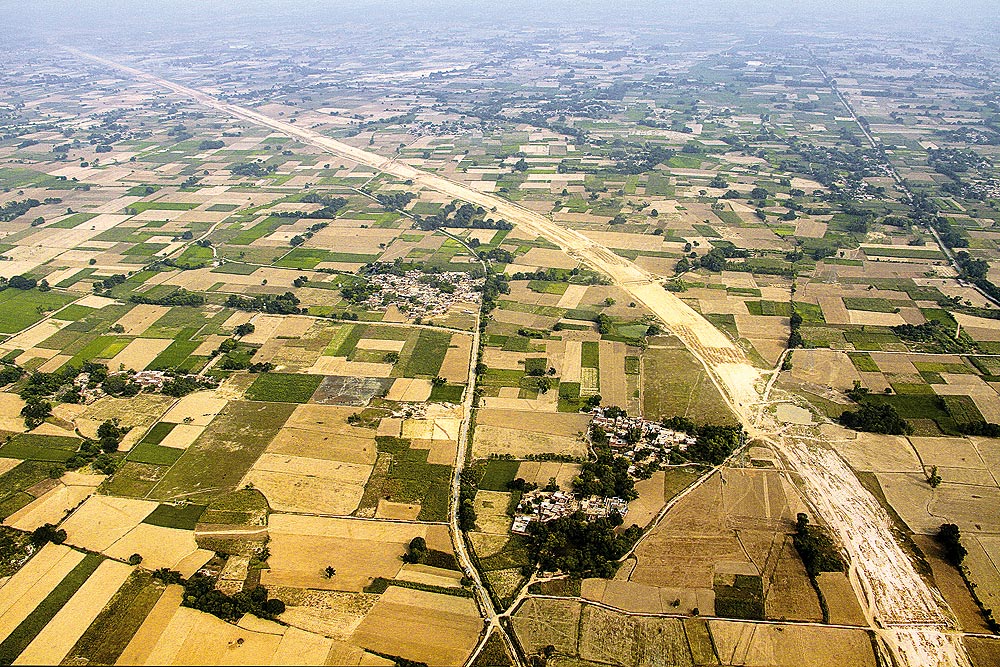 Speedy Way It seems all clear for the Lucknow-Agra expressway. (Photograph by Pawan Kumar)

Another project being undertaken on a grand scale is the metro rail. It’s the urban landscape of Lucknow that it will transform, but at the same time, Ghaziabad and Greater Noida are being connected by metro lines to the national capital. Kanpur, Varanasi and Agra are also getting metro transport networks. “This is something no other state in the country can boast of,” says chief secretary Alok Ranjan. E. Sree­dh­aran, iconic architect of the Delhi Metro project, has been roped in as special advisor to the chief minister and given a cabinet minister rank. The chief secretary monitors the Lucknow metro project every Monday, while managing dir­­­ector Kumar Keshav steers the 23-km, Rs 6,880-crore mega project round-the-clock. “Of this, Rs 2,000 crore has been earmarked for the 8.5-km first phase, work on which started exactly 12 months ago,” says Keshav. “Let me assure you, we will have the metro rolling by December 2016.” The message from the CM has gone down loud and clear to the 2,400-strong work force.

The IT city project in Lucknow has been entrusted to the HCL group, and the international cricket stadium is coming up under a PPP arrangement. “We took off on a raw piece of land barely seven months back, and today, not only is the entire green field visible but even the nine pitches have been laid out under supervision of world-class experts, while you can see some of the stands swiftly reaching their height,” says Uday Sinha, managing director of Ekana Sports, which has bagged the contract. “We have also signed an agreement with Delhi Dynamos to set up a world-class football stadium in the neighbourhood, besides a cricket academy and other sports facilities. 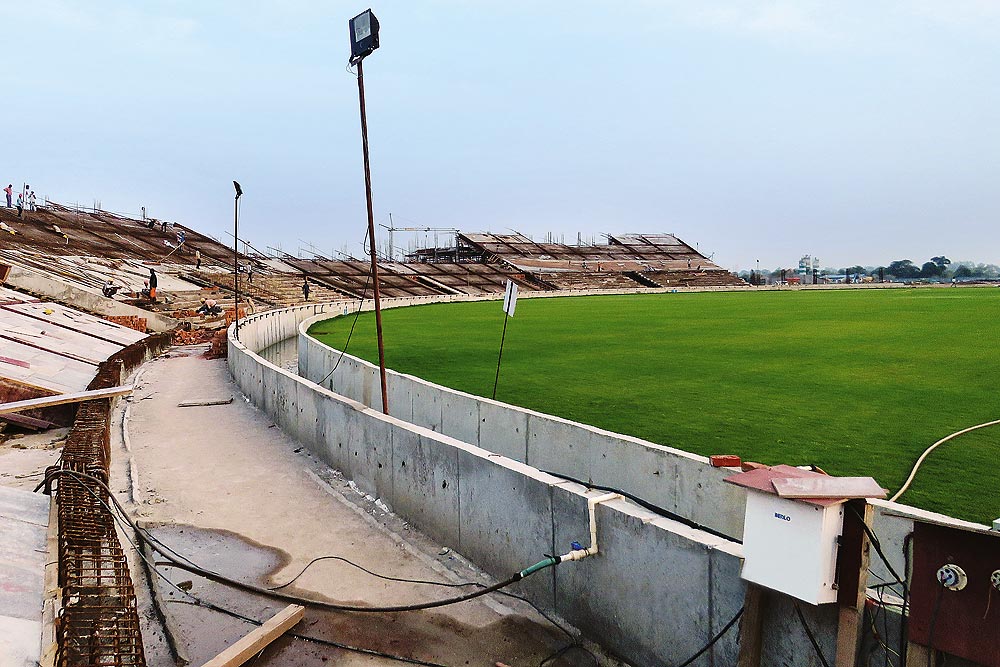 Green & Grey An international cricket stadium is born in Lucknow

Dr Naresh Trehan of Medanta fame is helping the government set up a superspeciality hospital, while a state-of-the-art cancer institute is also in the pipeline. A series of ‘investment conclaves’ hosted by the state government in Lucknow, Delhi and Mumbai have also led to signing of MoUs worth Rs 55,000 crore by players from other parts of India as well as abroad. Some of these have actually crystallised, while Akhilesh and his team are encouraging others to follow suit by ensuring that red tape does not come in the way of their execution.

Asked how the Uttar Pradesh government hopes to see these MoUs coming to fruition in the absence of proper availability of power and the poor law and order situation, chief secretary Ranjan says, “A small number of power projects are alr­eady under way, and we are confident of improving the power situation by the end of 2016. As for law and order, the state has been often maligned unnecessarily when the fact remains that we are far better than several other states, if you go by the National Crime Records Bureau figures.”

The chief minister is often heard accusing the media of projecting his state in poor light. “More often than not, criminal incidents in the state are blown out of proportion by the media,” says Akhilesh. “Take the case of Badaun, where the media called an honour killing a case of gang rape until the CBI spelt out the truth and proved us right.” He also says the media all­eged that Raja Bhaiyya was inv­olved in the killing of a police officer, whereas that has been proved false by the CBI.

By asserting himself in matters of governance, Akhilesh has earned some uncharitable rem­arks from his father. He is also fending off interference from his uncles, who have been running their fiefdoms for three years now. All the while, he keeps his characteristic soft exterior. Of his father’s chiding, he says, “He’s my father, he can say anything to me.” As for the parallel power centres that have often tripped him up despite his best intentions, he has now learnt to tackle it by reprimanding the bureaucrats through whom they operated. The message is going out loud, clear and insistent—like the countdown clocks he has installed—that Akhilesh means business and he wants his work done on time. Before the people decide to send the Samajwadi Party a message through the ballot.