You heard it on this channel first. On every channel actually. 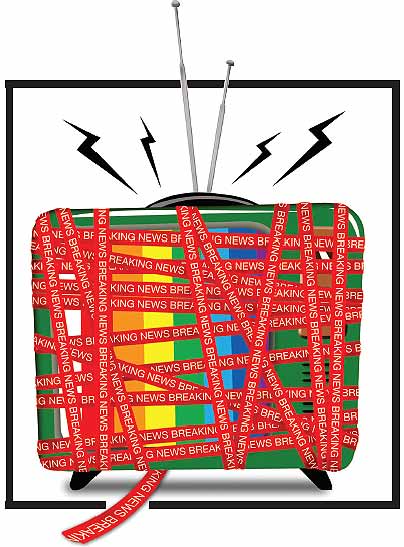 When I first came to India in the ’60s, the Editor was king. Even the proprietor of the Indian Express would not barge into the office of his legendary editor, Frank Moraes, but seek an appointment first. Now some newspapers don’t seem to feel it’s necessary to have an editor, or at least someone who isn’t an editor only in name. In those papers, it’s the circulation and advertising managers who enjoy the clout. Business comes first, journalism a poor second. Television networks, except of course for Doordarshan, are involved in frenetic ratings wars, underscoring that advertisers come first and the news is a vehicle to attract the ratings they are hankering after. Most channels seem to think the best way to win the ratings war is to out-shout your competitors. Mind you, NDTV’s recent advertisements that it’s winning the ratings war (and consequently doesn’t need to shout) indicate that the channel has discovered many viewers who don’t like their news at a high-decibel level.

The antics of TV journalists in trying to create floods in Delhi were rightly called ‘Paani Live’ by one daily.

Doubtless, when I criticise the state of journalism today, I will be accused of being an old man romanticising his past, which was not as glorious as he likes to imagine. I was reminded that nostalgia distorts the past when I bemoaned the commercialisation of the press at a recent editorial meeting of the Hindu. A senior journalist said he thought the press was far more adventurous now than it had been in the days of Frank Moraes. I had to agree that there was little or no investigative journalism until the advent of the great days of Sunday magazine under the editorship of M.J. Akbar; the newspapers then had been rather stolid. But whilst I would still say there are problems with today’s print media, I think it’s the commercialisation of the electronic media that is seriously undermining the role of journalists, particularly those who edit news bulletins and programmes. From this it shouldn’t be construed that I am arguing for the return of drab days when Doordarshan was the only channel around.

The most obvious place where the editor is missing from is the Breaking News slot, which usually deteriorates into a desperate struggle to fill airtime. After the BBC’s early encounter with 24-hour radio news during the first Gulf War, an old veteran of the newsroom said to his editor, “I reckon we’ve been broadcasting untreated sewage.” Apart from the lack of content, Breaking News consistently ignores two basic lessons I was taught. It was drummed into my head that film should never be used as wallpaper. But that is exactly what film is, or at least is for most of the time, in Breaking News.

The other lesson was “write to hit the shots”, or in other words, make the script fit the pictures. That of course goes out of the window when it comes to Breaking News. It’s in fact quite rare to see a properly crafted television news story in any Indian television news bulletin. But the root problem with breaking news is the lack of editorial control. The reporters on the spot appear to be entirely in the hands of overexcited presenters, rather than under the control of cool-headed editors. They are bombarded with questions, most of which they don’t know the answer to; they are asked to speculate, often dangerously, with questions such as, “Do you think there are any more bombs?”; and they are encouraged to interview victims and their relatives intrusively. Breaking News without proper editorial control has made TV journalists a laughing stock, as the success of the satirical comedy Peepli [Live] has shown. The antics of TV journalists in trying to create floods in Delhi recently were rightly called ‘Paani Live’ by one newspaper.

But it is unfair to blame the reporters in the field. It is the editors who are to blame; it is their responsibility to teach and control the reporters. It’s all too obvious that few of the reporters have even been trained in speaking clearly. There is far too much gabbling. The best way to learn is to be corrected, and that can only be done by regularly reviewing the output with the journalists involved and pointing out their mistakes. It’s also of course a good idea to praise them when they’ve done well. I often ask the young journalists who interview me whether their channel reviews its output regularly, and the answer is, inevitably, no.

This lack of editorial control is surely a byproduct of the subordinate role journalists now play in the management of the electronic media. If editors were given the independence to decide what news is and how it should be reported, we could see quite different reports on our television screens. If editors were given adequate resources, including time, they could ensure that reporters continued to learn on the job. Because editors are not being given the independence and the resources they need, and reporters are not being given the training they need, journalists should stand together and demand that the management allow them to practise their profession.

Although I have concentrated on television, the print media does have similar problems, particularly when it comes to content. The problems are not limited to India. As more and more people get their news from the web, blogs and community-funded journalism, the financing of journalism is going to change radically and increase pressure on journalists to compromise their professional standards. In a recent issue of the British National Union of Journalists’ magazine, David Hencke gave this stark warning, “It is clear that the world will change out of all recognition in the next five years. Many people have warned about the death of good journalism.” But Hencke himself is not giving up. He ends by saying, “There is enormous creativity out there—possibly just enough to find a way to finance and develop a vibrant way of reviving a vital profession.”

I am pessimistic. I don’t believe there will be a revival unless journalists unite to defend their profession. Is there any hope that we will unite when the very nature of our profession makes us value individualism so highly?