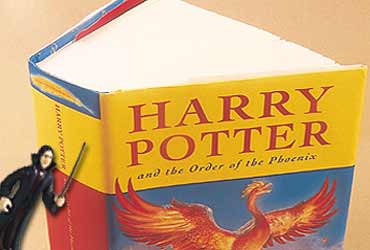 Death Eaters: Group of dark wizards who are Voldemort’s followers.

Floo Powder: Magical, glittering powder, when sprinkled, zaps a wizard or witch to wherever they want to go.

Forbidden Forest: Forest surrounding Hogwarts. Home to unicorns and other mystical creatures. Out of bounds for Hogwarts students.

Galleons: Wizard currency. Potter’s inherited a potful of these from his parents.

Hogwarts School of Witchcraft and Wizardry: Boarding school where Harry and friends learn their craft—and much more. The school’s motto: "Never tickle a sleeping dragon".

Marauder’s Map: Map showing every detail of Hogwarts and the castle grounds.

Ministry of Magic: Council whose main job is to keep wizards and witches a secret from muggles.

Mirror of Erised: Whoever looks into this mirror sees their greatest desire reflected at them.

Mudblood: A mean name to call someone who is muggle-born, like Hermione.

Muggle: A non-magical person. Like most of you reading this glossary.

Nimbus 2000: The super-duper fast-flying broomstick that helps Harry become an ace seeker of the golden Snitch in Quidditch.

Platform 9 3/4: The magical platform (invisible to muggles) at London’s King’s Cross station where Hogwarts students board the Hogwarts Express.

Quidditch: The wizards’ favourite game. Involves chasing magical balls flying around on broomsticks. Whoever gets the Snitch is the winner.

Sorting Hat: Patched and frayed wizards’ hat which determines which house a student belongs to. It sings and has mood swings.