The Mumbai police chief is accused of conniving in the fake stamp paper scam. And he may just be one of the small fry. More Coverage . 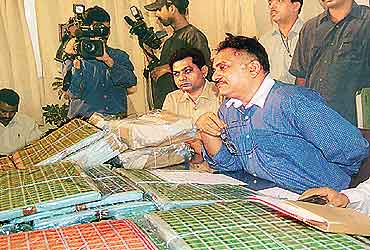 The magnitude of the scandal, as it slowly unspools before a shocked nation, underscores the systemic rot. Telgi's nexus with law enforcers at the inspector general and police commissioner levels has caused public outrage. So far, 65 people, including a dozen senior police officials, two MLAs and a lawyer have been arrested for their collusion with Telgi. In fact, even the Delhi Police has arrested two people, Sushant Kumar Dass and Lalit Patodi, on charges of facilitating Telgi's fake dealings by providing him premises in the Capital and opening bank accounts under fictitious names. As the investigations continue, many more skeletons are likely to tumble out.

Mumbai's police commissioner R.S. Sharma finds himself in the dock for "conniving" with Telgi. This comes close on the heels of the arrest of IG (intelligence) Shridhar Vagal last week, under the Maharashtra Control of Organised Crime Act (MCOCA) for accepting bribes from Telgi. Now, he has been remanded to judicial custody till November 27. This is the first time in the history of Mumbai police that such senior officers have been accused of directly conniving with a criminal. The Bombay High Court has left it to chief minister Sushilkumar Shinde to decide whether Sharma can stay, although evidence against him is strong enough to warrant a dismissal. During a meeting with the chief minister on November 13, Sharma offered to proceed on leave till his retirement next month. But the home department, which did consider accepting the proposal, later changed it mind.