He's fidayeen, the youth who has martyrdom on his mind and indoctrination in his heart 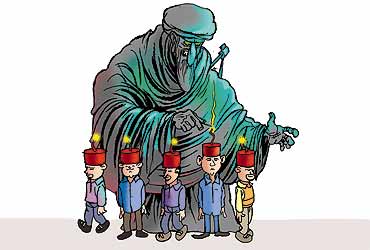 outlookindia.com
-0001-11-30T00:00:00+0553
Afaq Ahmed Shah, at 17, was shy and introverted, preferring the solace of his room to the chatter of his friends. His father, Yusuf Shah, a school teacher, says he usually spent his time studying so he could become a doctor. Afaq even got himself photographed wearing a doctor's coat and a stethoscope and kept the framed picture in his room.

The youngest of three brothers, none in the family thought his behaviour had changed when Afaq started spending nights in the local mosque next door. It was good, his parents thought, that he was taking an interest in religion. They were not overly worried either when on some evenings home, Afaq would read the Quran by candlelight even when there was power. It soon became a routine—the flickering flame and the Quran, Afaq suddenly reading out aloud and crying.

Then one day, Afaq just left home. Three weeks later—on April 19, 2000—he called his father and said: "Abbu, mein jaa raha hoon (I'm leaving)." A few hours from then, the Shahs heard security vehicles screech to a halt outside their door. Their son, they were told, had exploded himself at the Badami Bagh gate in Srinagar, the army's 15 Corps headquarters.

His neighbours in downtown Srinagar's Khaniyar locality were shocked that the shy Class XII dropout could have been a suicide-bomber. He had driven a stolen red Maruti—laden with explosives—to the high-security barrier. What remained of him were several pieces, his body having been blown over a distance of 100 metres.

His family was horrified as they tried to recall who Afaq had been in touch with over the last few months, but for the rest of Kashmir it was yet another instance in the 45 suicide attacks—29 in 2001 alone—the Valley has seen since the Kargil conflict came to an end in July 1999. Delhi—the national capital—has been struck in the two places that are the most symbolic: the Red Fort on December 22, 2000, and this December 13, the Parliament complex.

"The latest technique," says J&K DGP A.K. Suri, "is to have suicide-bombers drive up in cars laden with explosives because it leads to greater destruction of both men and material." This technique was used to devastating effect on October 1 when a fidayeen rammed his vehicle into the gate of the J&K assembly in Srinagar. He killed himself and his four accomplices, but made headlines not so much for the 34 others who were killed as for the fact that a highly-guarded building like the state assembly had been penetrated and hit. The recent Parliament attackers too had come in a car bomb which had it exploded, would have caused untold damage.

But what is it that makes youngsters want to turn their bodies into guided missiles? Renowned Kashmir-based psychiatrist Dr Mushtaq Margoob doesn't see suicide-bombers as suffering from psychotic disorders. "They go into attack sure of death; it probably has to do with indoctrination because they see death as martyrdom, not suicide," he says.

Religious indoctrination and motivation thus are essentially what make suicide-bombers tick. Afaq's behaviour—of reading the Quran only by candle-light when he could easily have switched on the lights—speaks of a certain kind of indoctrination. Age too plays a part, as a study by Kashmir police shows most bombers to be between 15 and 25 years. Impressionable and so easier to cast in a mould—in this case into explosive devices—most of them are, as Kashmir IG K. Rajendra Kumar says, "trained, religious zealots. The profile of a suicide-bomber is that of a young man from a religious home who has been approached by a mosque, then recruited and finally trained."

Strangely, 98 per cent of the fidayeen attacks in Kashmir have been conducted by foreigners—Pakistanis and Afghans—and only in two cases have local Kashmiris gone on to become offerings to martyrdom. Apart from Afaq, there was Mohammad Aslam, a J&K SPO (Special Protection Officer) who was one of three other fidayeen who attacked the Special Operation Group (SOG) complex in Srinagar on December 27, 2000, in which 11 personnel died. An SPO who deserted the ranks, Aslam came back to attack the very force he'd been part of.

One can understand why Kashmiris would want to blow themselves up, but not why Pakistanis would want to come and kill themselves here. "Living under a perpetual cloud of violence breeds a sense of helplessness and hopelessness," says Margoob who's treating increasing cases of children with nervous disorders induced by the sight of death. Afaq may have fallen in that category but not the Parliament attackers who'd crossed the LoC.

No suicide-bomber has lived to tell his tale but interrogation reports of arrested members of the Lashkar-e-Toiba (LeT) and the Jaish-e-Mohammad (JeM) indicate that training starts young. Says a senior BSF officer: "Young recruits are fed on the concept of jehad, told stories of 'Indian atrocities' and are usually those who have grown up in madrassas." This jehadi conviction continues even when in custody, as a senior police officer reveals: "Even during the course of interrogation they say 'you can kill us but we won't change our minds about you being infidels'." Unlike in Palestine where in specialised training centres, students are made to mouth lines like 'I'll grow up to become a suicide-bomber and attain paradise' and even taught to draw themselves strapped in explosives, security or intelligence agents in Kashmir have yet to come across evidence of such specialised training in LeT or JeM headquarters.

Suicide-bombing is a form of psychological warfare where the security forces are pushed on the backfoot in the face of this taunting poser, 'what can you do to protect vips or installations in the face of somebody willing to die?'. Probably why Lashkar's publicity wing chief Hafiz Mohammad Idrees often says: "The Lashkar youth will shortly break the backbone of India through suicide squads." Cautions counter-terrorism expert K.P.S. Gill: "vips will have to get less sensitive about them or their vehicles being put through personal search due to technological advances made by terror organisations. You can put them through a metal detector and still not be alert as now they've also acquired plastic detonators."

"Suicide bombings," says a police officer, "are simple, low-cost operations guaranteeing heavy casualties." An advantage: you don't even have to map exit routes; the only way out is death.