'Pop'...and this cultural alchemist creates rasiks out of lay audiences 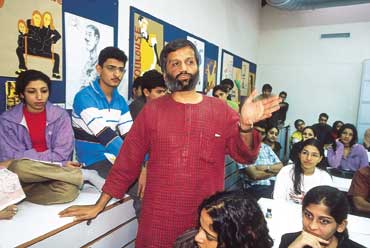 Inside his pooja ghar was a picture of Johann Sebastian Bach, the western classical composer whom he invoked along with Saraswati. And by 1992, his quest became his profession when he launched Sabrang, an organisation that "demystifies the classical arts". Or more simply, "a floating university that attempts to make up for the lapses in our education system. For, in 1947 when India achieved freedom...as birthright, it included seven classical dance forms and three forms of classical music. Had the i&b bureau or even the ministry of culture created an audience base for the arts, Manipuri dance, dhrupad dhamar and the intricacies of Tyagaraja would have become like mother’s milk to us. Instead, today the north Indian doesn’t listen to Carnatic music, the Rajasthani doesn’t listen to Rabindrasangeet. Indians now settle for Madonna and Michael Jackson when we should know and understand Bhimsen Joshi and Bach, Kathak and Kathakali as well. If algebra can be made accessible to us by gradual initiation, why can’t the education system initiate us into classical dance and music, sculpture and painting, architecture and mythology?" asks an agitated Parag.

"Bridging this unholy gap is my dream," he adds. "Many of us educated Indians are familiar with what goes on in Manhattan and Mayfair. But we can’t name five ragas nor do we possess the faculties to identify five symphonies." That’s where Sabrang steps in—helping to turn lay audiences into knowledgeable rasiks, on whose appreciative nods and applause every classical performer depends. For potential rasiks, who fear those pedantic lectures, Sabrang has a surprise in store. Helping you discover Neil Diamond in Mozart, Pavarotti as a precursor to Elvis and the Beatles as a ready reckoner of Bach, the listening sessions are packed with contemporary connections to the classical. And the adbhut part about all this is that Parag is a self-taught "amateur musicologist". But he still effectively conveys the grand spirit, metaphors and meanings of the classical with some lively dialogue and incisive repartee. Speaking in a cross-cultural patois of Bindi (Bombay Hindi), Marathi, Tamil, Bengali, Urdu, German, Italian and French, the sessions become meaningful to people no matter what their background and degree of familiarity. Using his brand of inoffensive tapori talk, he manages to fix a frame on the zeitgeist of the baroque, classical and Romantic periods. Parag strives to bring alive not just their music, painting and architecture, but also such issues like the relationship between church and state and scientific discoveries. All this is interspersed with explanations on the differences and similarities between the Indian and western paradigms. And suddenly the inaccessible vocabulary of symphonies, concerti, allegros and adagios reveal themselves to everyday people in jeans, salwar or saris. Beethoven, at last, belongs as much to them as other exalted audiences in black ties and ballgowns.