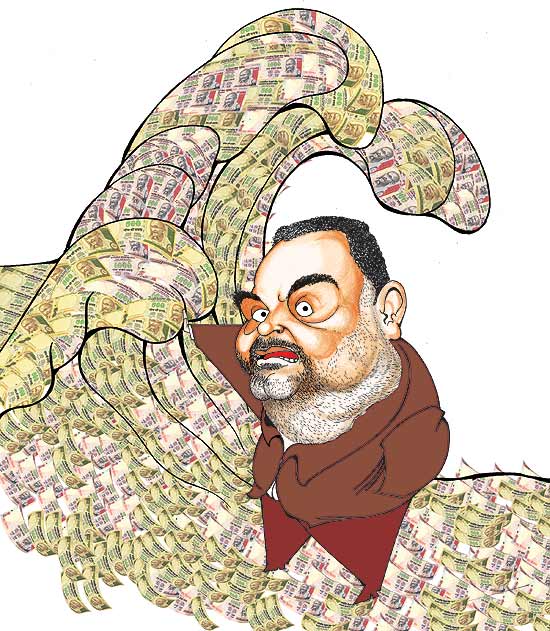 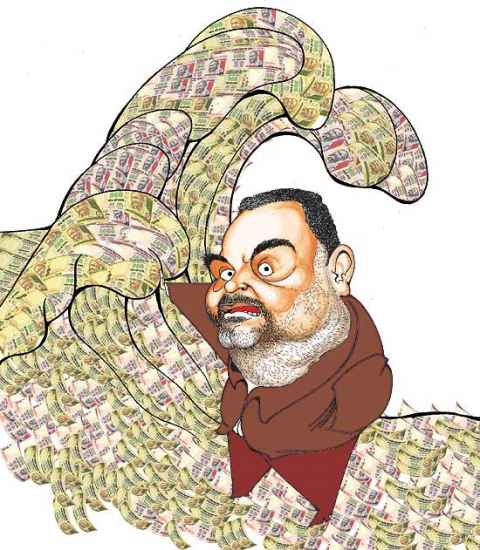 A reclusive liquor baron may seem like an anomaly in these never-ending good times. But Gurdeep Singh Chadha—better known by the moniker Ponty Chadha—fits the bill. Often called “Mayawati’s financier”, the 57-year-old Ponty has been making large (if silent) waves for the political patronage he enjoys in Uttar Pradesh. Any bottle of liquor sold in India’s most populous state goes through his company, Blue Water Harvesting. He’s got all the rules changed to make him the sole contractor—for wholesale and retail distribution of liquor, mining and even the mid-day meals scheme—in the state.

Besides all this, Ponty’s interests span film production and infrastructure development to sugarcane transport and overseas farming. This is by some estimates a huge Rs 6,000-crore empire, but little is known about the man apart from a few tantalising snippets. For instance, in a 2009 essay written in Granta magazine, author Rana Dasgupta wrote about how Monty Chadha (Ponty’s son) described his father as a disciplinarian who warned him: “If you do bad things, like if you get caught for drunk driving, I can’t get you off.... Of course, later I discovered there was nothing I could have done that my dad couldn’t have got me off.”

BJP national secretary Kirit Somaiya sarcastically refers to Ponty as the UP chief minister’s “blue-eyed boy”. “There is something to be said about Ponty Chadha that he is able to persuade political leaders to facilitate his business ventures to create such a big empire. The responsibility for corruption lies more with political leaders,” says Somaiya. Politics was on everybody’s mind when on February 1, income-tax officials raided over a score of Ponty’s residences and business group premises. Tall claims of Rs 100 crore having been unearthed from lockers in his Wave Mall were subsequently whittled down, along with news that Ponty was then in Dubai preparing for his daughter’s wedding. On his return, Ponty requested I-T officials to give him time till after the wedding to respond to their queries.

Many feel the timing of the raid—with Ponty’s daughter’s wedding so close and polls round the corner—was all wrong. Clarifying that Ponty’s is the not the only rags-to-riches story eyed with suspicion, former home secretary Gopal K. Pillai says, “He was not on our radar anyway in the last two years of my tenure.” A typical response from bureaucrats who have dealt with Ponty for over a decade is that “he accords courtesy and never tries to overstep the mark, whether in seeking an appointment or any clarification”.

Folklore has it that the annual auction of liquor vends back in Punjab wouldn’t begin till Ponty arrived on the scene.

But then Ponty has an amazing knack of getting on the right side of any political leadership, and to roll out mega plans with hardly any hitches. He gained a foothold in Punjab’s lucrative liquor trade business during the rule of the Akali Dal-BJP government in 1997 and quickly assumed control of the retail and wholesale trade. Through Sikh leaders of the Delhi Sikh Gurudwara Management Committee, he subsequently developed an equation with the Congress leadership in Punjab which came to power soon after the Akalis in 2002. It was during the Congress rule that his business empire really flourished.

Folklore has it that the annual auction of liquor vends would not begin till he was present at the venue, and that he was instrumental in easing out the smaller players from the business, which he soon completely monopolised. Liquor prices hit the roof and Ponty’s brands were ubiquitous at every vend in Punjab those days. When the Akalis returned to power in 2007, he tried to mend fences with them, but it didn’t work. That impelled him to shift to UP, when Mulayam Singh Yadav was at the helm. Power equations then changed in UP, bringing more patronage for Ponty, who blossomed as one of Mayawati’s favourite corporate leaders.

Naturally, he attracted controversy. The UP Comptroller and Auditor General (CAG) has highlighted a large number of procedural anomalies and discrepancies in the disinvestment of 11 state-owned sugar mills in June 2007. According to the report, rules were openly flouted to sell the mills for peanuts as a single unit despite their valuable land assets, leading to financial losses of Rs 224.28 crore to the state exchequer. The biggest beneficiary was Ponty’s Wave Industries.

Similarly, in 2008, almost the entire wholesale and retail liquor business in UP was given to Ponty under a new licence policy. Real estate developers in Noida point to large tracts of land given to Ponty for infrastructure and residential projects. The deal, say market sources, is that Ponty pays a substantial ‘official cut’ for the land to Mayawati, leaving the exchequer poorer.

The Chadha family has indeed come a long way since the mid-1970s when Ponty’s father Kulwant Singh was once reportedly taken handcuffed from their home in Moradabad for dealing in contraband liquor, a neighbour recalls. In the early days after the family settled down in Moradabad, some recall that their cinema hall used to be a favourite meeting ground for the town’s unsavoury elements. Barring a few close friends, the family did not socialise much. Even today, the extended Chadha family works together with Ponty’s two brothers involved in the varied businesses.

The I-T raids have stirred things up. On February 1, when Raj Kumar of Ghaziabad walked into a local liquor shop to buy a “quarter”, he was surprised at being charged Rs 30 less. It must be a poll bonanza, the young farmer thought. It’s only on hearing of the I-T raids that he learnt why after so many years liquor was available at the maximum retail price. “This is the only state where even government-owned shops charged much above the MRP, referred to as Mayawati Tax or Maya prasad,” says Raj Kumar.

By Lola Nayar with Chander Suta Dogra and Sharat Pradhan