Where even Mungeri Lal gets his dreams fulfilled! 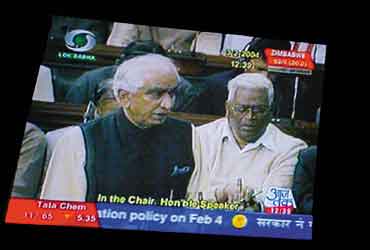 outlookindia.com
-0001-11-30T00:00:00+0553
If there was any doubt that Jaswant Singh’s month-long economic bonanza was not simply to bolster the feelgood factor but also to trigger the first burst of a poll campaign, February 3 proved it conclusively. Mini-Budget part 3 was in the main directed at Sonia Gandhi, our lady of the opposition, who sat curiously silent through the hour-long Opposition pandemonium and the 40-minute long interim budget speech.

The first was when Jaswant referred to the series of funds for farmers, small industry and rural infrastructure at two per cent below the plr of banks. It was in response to Sonia Gandhi’s accusation that "while car loans are available at 5 per cent, there’s no credit for poor farmers". The logical reply would’ve been that the government hadn’t asked banks to give car loans, it was a figure they had arrived at themselves, with due protection of margins. But just to give a fitting reply, Jaswant doubled the mistake of handholding banks to areas where they aren’t comfortable.

The second was when Jaswant referred to Mungeri Lal while talking about his growth expectations for the current year, which he judiciously kept at "7.5-8 per cent" despite higher projections made. Sonia Gandhi had once said the government’s hopes of getting eight per cent growth was like Mungeri Lal ke haseen sapne (Mungeri Lal’s beautiful dreams). The answer finally came to Jaswant on Tuesday. He said he’d indeed looked hard for Mungeri Lal but in vain. So please could somebody tell Mungeri Lal his dreams had come true. Now if Jaswant indeed manages to get an 8 per cent growth next fiscal too as he’s budgeted for—something that’s never happened in the nation’s history—all its citizens would be glad to be in Mungeri Lal’s shoes!

One Wave Of The Jas Wand