Turned the Congress Brahmin-Muslim-Dalit formula on its head, bringing BSP to power and returning UP to single-party rule after more than 20 years 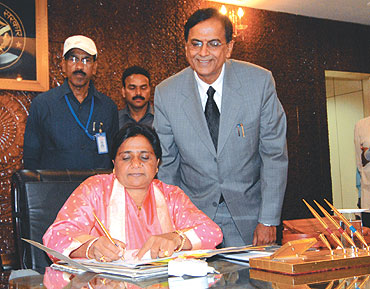 It was then that Mishra crafted the BSP’s Brahmin strategy, which brought the party to power in 2007, returning UP to single-party rule after more than two decades. He did this by turning the Congress’s decade-old Brahmin-Muslim-Dalit formula on its head: now, the Dalits would lead the combine. "The Brahmin-Dalit combine disintegrated in the Congress because the Congress used Dalits as a votebank," Mishra had said in an interview. "Unlike the Congress, we in the BSP chose to establish a complete social integration between the two communities." Of course, the low-key, reticent Mishra is always quick to say he was merely implementing Mayawati’s strategy, shrewd enough to know that no one in the party can be larger than the leader.

But regardless of whose idea it was, Mishra was the one who realised it. In the run-up to the 2007 assembly polls, he addressed as many as 98 Brahmin sammelans and travelled to all of UP’s 70 districts to constitute ‘Brahmin-Dalit bhaichara banao samitis’. The party’s new communally harmonious slogan—"Haathi nahin Ganesh hai, Brahma, Vishnu, Mahesh hai!"—was heard first at the Feb 2005 sammelan in his hometown Allahabad. Mayawati gave him a separate helicopter to campaign in, a fact his caste fellows noted with approbation. The Brahmins were back in the game.