Political Soap In Our Eyes

In a medium where gravity is an enemy, does the great democratic exercise amount to a reality show? 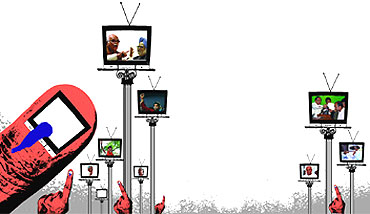 Theatrics, animated discussions, surprise announcements, some shocking oratory, shoe-throwing and a debate that didn't go to script. Elections '09 has been a roller-coaster of TV moments starring our politicians. Winsome Priyanka, tough-talking Manmohan Singh, the clipped accent of Naveen Patnaik, the hate-spewing Varun Gandhi, the ambivalent M. Karunanidhi and the almost chafing Narendra Modi have all graced the small screen in a never-ending 24x7 loop. TV news, it seems, is out to overdose the viewer.

The airwaves are crowded like never before—143 news channels, against just 43 in 2004. Most channels have 12-14 hours devoted daily to news, and TRP ratings indicate that viewers are taking in more news than ever before, so much so, even political parties that cared little about telepresence—such as the Left parties or the BSP—are now courting it. Issues are debated, dissected, even shaped on the small screen: the coverage of a shoe thrown at Union home minister P. Chidambaram led to the denial of tickets for two Congress leaders involved in the 1984 anti-Sikh riots.

The jury is still out on whether addiction to the idiot box ultimately decides voters' choices. But Elections 2009—the biggest reality show of the season—has seen a steady rise in viewership (see infographic) for news channels, much higher than what it was in 2004, when the last general election was held. In fact, some Hindi news channels boast of TRPs which were the preserve of entertainment channels.

The Sethis of Delhi are a typical TV-viewing family. They spend about 45 minutes daily switching between English and Hindi news channels. Anuj, a company executive, says, "Even while watching ipl, I feel the need to get back to election news. I don't think my voting preference is decided by TV. But I take the news and discussions seriously." In Chennai, D. Gopinath watches TV news even though he feels news is often suppressed or played up, depending on the channel's political allegiance.

But what accounts for the rising TRPs of news channels? Specialists who track media say that events, spectacularly tragic in scale, usually lay the foundation for news viewership, which peaks and steadies. How does that apply here? L.V. Krishnan, CEO of Television Audience Measurement (TAM), says the viewership for elections this time is higher than in 2004 largely because news and the need for information has grown with every event. "The 26/11 attack on Mumbai, attacks on cricketers in Pakistan—these have only succeeded in reinforcing the point that TV is the medium to gain first-hand information. The interest in elections too is a manifestation of this growing interest. I think TV helps people understand political parties by creating an open platform with the audience," he says.

But what about uniqueness of style or content? There is little to distinguish between regional and national channels in terms of poll coverage. Take the Marathi news channels ETV, Zee Marathi, SAAM, Star Mazha and IBN-Lokmat. Most of them have a similar format: follow a party leader on the campaign trail, one-on-one interviews with key leaders, two-header or three-header studio discussions on constituencies, debates among candidates, debates among second-generation leaders and so on. This formula is followed by other language channels like Sun, Jaya, TV9, Maa, Asianet, Star Ananda etc, making it perhaps the first election in which there is a tremendous output of content.

Keeping Count Of The Eyeball Grabbers 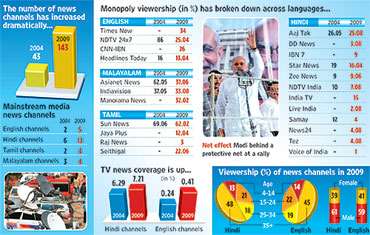 Much of it, of course, plays to the gallery. Dipankar Gupta of Jawaharlal Nehru University, a sociologist, says, "Serious issues are swept aside. All of us who watch TV are sucked into this inanity that is whipped up and everything is done in a spirit of a carnival. Nobody questions the claims made by parties like the Congress or the BJP when they promise to bring about changes in the health and education sector." Even election analyst Yogendra Yadav does not discount the possibility of average viewers treating news as entertainment. Well-known television host and political analyst Aju Parulekar, a consultant to Marathi news channels, puts it more succinctly: "Whether it is an election or 9/11 or 26/11, TV is basically drama and entertainment. People watch it for their daily dose of entertainment and levity, not because we provide them with gravitas and issues."

And P. Sainath of The Hindu says, "Television can have a tremendous impact in terms of framing or not framing an issue. We have been crying hoarse that this is an issue-less election. It isn't. It's just that the media, especially TV, has not framed the issues well. We have really swung between Varun Gandhi and ipl and gudiya-budiya so far, and this in a general election! The only time television has managed to frame an issue well is when journalist Jarnail Singh threw his shoe at the home minister."

As Arvind Rajagopal, author of Politics After Television: Hindu Nationalism and the Reshaping of the Public in India, puts it, "Unlike in the West, the poor in India doubt if popular opinion truly matters or if speaking the truth will set them free. In this context, TV's influence is greatest when it disavows such influence...it is doubtful how much influence TV could exercise."

In fact, news that doesn't have personalities or drama often has no place on TV. B. Venkatesh Kumar, director of Mumbai-based Rajiv Gandhi Institute of Contemporary Studies and author of the just-released book Electoral Reforms In India, says, "An entire village near Solapur, power minister Sushilkumar Shinde's constituency, declared it would boycott elections because it still does not have power. But obviously this will not make it to any TV news channel."

All of this makes former editor B.G. Verghese comment that "in terms of sheer quantity, the viewership has gone up greatly but the quality is akin to watching a spectacle—party entertainment, leading to a habit formation that is fed by a repeat telecast. The same Ravi Shankar Prasad and Jayanthi Natarajan can sometimes be seen on air on different channels around the same time. It's more like you need a Kapil Sibal to match an Arun Jaitley to see who comes out the vanquisher or the vanquished."

Barkha Dutt, group editor (English) of NDTV 24X7, admits that viewer fatigue could set in with the same faces on air. She says: "You know the views of these people. I admit we have not managed to create a new set of politicians." But Arnab Goswami of Times Now does not share that viewpoint: "It is true of every democracy where spokespersons are on air. At least on my channel they don't say the same thing."

For politicians, television has gone from being the neutral medium of old to a sort of an active force, one that is better turned into an ally working for you. In Tamil Nadu, where party affiliations and news channels are synonymous, the ruling DMK has distributed lakhs of colour TV sets. In fact, the state government has again set aside Rs 25 lakh for 2009-10 for the distribution of TV sets, each priced about Rs 2,000. The DMK takes the medium so seriously that, when in the course of a live programme a leader fumbled in response to a question, he was called back by party chief M. Karunanidhi.

Congress spokesperson Abhishek Manu Singhvi underlines the importance of TV in shaping perceptions. He says, "In today's scenario, elections have to be fought on two fronts—the media and the grassroots and one can never underestimate the power of TV. If you compared the India in 1991 to 2009 you have to acknowledge the impact of telecom and the audiovisual media. And just as society cannot ignore television, politics cannot ignore TV."

Singhvi, who is a regular on news channels, says he knows instinctively what to say and very often issues turn up so frequently that your response becomes the party line. A view shared by his bete noire in politics, Arun Jaitley, who marks a clear distinction between English news channels and Hindi and other language channels. He says the "former simply occupies the mindspace while the latter truly occupies the market place". It is because of their reach that the language channels rank high in the BJP's campaign strategy.

Even the Left has embraced TV and acknowledged its power. Amitava Nandy, a CPI(M) MP seeking re-election from Dum Dum, says never before has the electronic media played such a big role in elections as now. "In reach, television has the capacity to get our messages across," he says. No wonder then that Left leaders have no special aversion to this 'bourgeois' medium.

But can a connection be made between watching TV and voting? Narendar Pani, a professor at the National Institute of Advanced Studies (NIAS), Bangalore, says Karnataka has just finished the first phase of elections and has recorded only 42 per cent turnout. "The middle class makes the most noise on television but as far as voting goes, Bangalore South, an affluent pocket, registered only 44 per cent, down from 49.42 per cent in 2004. Same goes for the youth." But Pani says the importance of the medium should not be minimised due to the low voting. Sahana Udupa, NIAS researcher, adds, "Without a detailed study on the effect of TV on voting patterns, it is not possible to conclude if they have a decisive role. Such a study should attend to local specificities rather than ride on the rhetoric of generalisable results."

The potency of the medium is without doubt. And, to be fair, it's still evolving. In either case, we are still unsure of its exact effects. For urban audiences, TV has perhaps replaced the political rally. Or become the natural forum of protest. But are these limiting trends? Rajagopal says, "Television creates an echo chamber for itself—we may assume what is not on TV is not important." Surely, we must also have other ways to gauge a party rather than go by how well its leaders come through on the small screen.

By Anuradha Raman with inputs from Smruti Kopikkar in Mumbai, Dola Mitra in Calcutta, John Mary in Thiruvanathapuram and Pushpa Iyengar in Chennai

There's Room For Her