Assailed from without and within the family, Karunanidhi hobbles out of UPA with a cause as a crutch 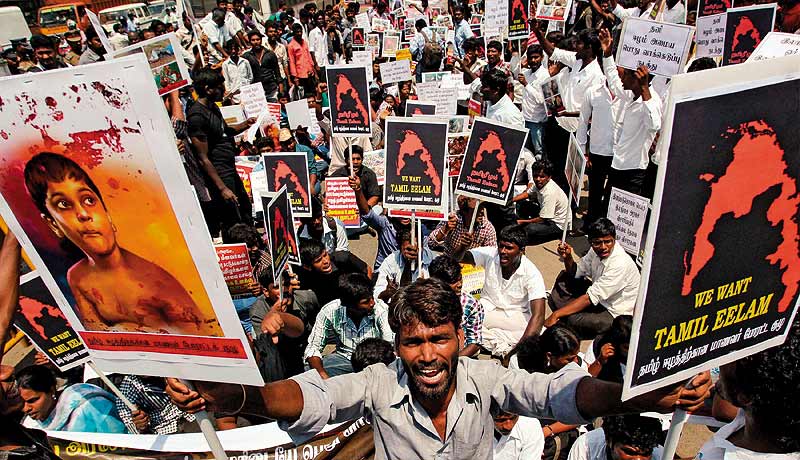 Where Karunanidhi & Sons stand after the pullout and UN vote

The DMK leaves the UPA ship, but won’t sink it, says a leading English daily. The weather-beaten ship is already nearing the shore. So it hardly matters whether it sails or sinks. Whether the DMK is a rat or not, as the headline implies, the fact remains that it has never been a natural ally of the Congress. For its politics has always been rooted in anti-Congressism. And DMK president M. Karunanidhi, who has been at the helm since the death of the party’s founder, C.N. Annadurai, in 1968, has always believed politics is the art of the possible, even while proclaiming from time to time that power is like a shawl and ideology is like the dhoti. Never mind that he has been caught with his pants down quite often.

So it hasn’t come as a surprise to anyone that Karunanidhi has chosen to walk out of the Congress-led UPA government at the centre, ending nine years of a stilted alliance. With the DMK’s exit, the UPA government is reduced to a minority, but the already non-functional government may yet manage to limp from one crisis to another with the support of the two Ms of Uttar Pradesh, Mulayam and Mayawati, so long as there are corruption cases against them to get investigated by an agency of sleuths that might well be called the Congress Bureau of Investigation.

If the government holds, it may be because no MP wants an early election. The BJP is yet to sort out its leadership. The Samajwadi Party, which came to power in Uttar Pradesh hardly a year back, wants some time for playmaking in the centrefield. Mayawati’s BSP too is content for now to watch its rival, the SP, diminish its own aura in power. Both parties will be pitted against the Congress in Uttar Pradesh, so, in this piquant situation, the rickety UPA coalition may manage to sustain itself through the tina factor, but not for long. Till the Karnataka assembly poll in May and the state elections at year-end decide which way the wind is blowing, the UPA government may manage to hang on as a minority—alive but kicking only feebly.

Even when Kanimozhi was arrested, the DMK stood by UPA. Withdrawal now is an I’m-broken-so-I’ll-break-you decision.

The Congress can take credit for having managed a coalition for nine years, the longest since coalition politics arrived in the late 1980s. This is also the longest period the DMK has managed to enjoy power at the Centre. So its decision to break with the Congress on the Sri Lanka issue—because the government supported a “weak and diluted” US resolution against Sri Lanka at the United Nations Human Rights Council—comes as a surprise. After all, it did not withdraw over fuel price hikes, the opening of FDI in retail, and even the imprisonment of Karunanidhi’s daughter Kanimozhi and his protege A. Raja over the 2G scam. And during the decisive phase of the 2006-09 Eelam war, when India not only did not bail out LTTE chief V. Prabhakaran but even extended logistical support to the Sri Lankan armed forces, the DMK had remained with the UPA. Karunanidhi did hold out the threat of pulling out, but backed away when then foreign minister Pranab Mukherjee explained a few home truths about the security implications of the war in Sri Lanka.

What is seen as Karunanidhi’s biggest gimmick is the breakfast-to-lunch fast for a ceasefire in Sri Lanka. He called it off after the Rajapaksa government, at the prodding of foreign secretary Shiv Shankar Menon, announced that it wouldn’t use heavy calibre weapons­—never mind that the forces were close to getting the LTTE and the war was racing towards a bloody climax in which Prabhakaran, his family, his lieutenants and some 40,000 civilians were killed; rebel troops who were captured were shot at point-blank range; Prabhakaran’s 12-year-old son was brutally gunned down; and women rebels were stripped, raped and shot dead by triumphant Sri Lankan troops. Karunanidhi did not even go along with Tamil Nadu chief minister J. Jayalalitha’s 2011 demand for an economic embargo against Sri Lanka and an arraigning of Rajapaksa for war crimes.

He threatened to pull out only when the United Nations Human Rights Council, at its meeting in Geneva in March last year, took up a US-moved resolution calling for credible investigation of alleged rights violations during the last phase of the anti-LTTE war. Deviating from its avowed policy of not supporting country-specific resolutions, the Indian government­—under DMK pressure—voted for the US resolution, of course, after getting it diluted. But for an inwardly relieved Karunanidhi, it was occasion to blow the victory conch and, in his exuberance, he confessed that even if he had quit, he would have supported the UPA from outside.

With his maximalist position  known, no one took his threat seriously. He made impossible demands. He wanted an international investigation of Sri Lanka’s war crimes and an amendment to the US resolution to label the ethnic conflict as a genocidal war against the Tamils. Genocide has definite connotations in international law. President Rajapaksa is a democratically elected leader, while the LTTE was an outfit banned by several countries, including India. And the United Nations’ own independent investigations indicted both the Sri Lankan forces and the LTTE of war crimes.

Intra-family rivalries played their part in the drama. Stalin had threatened to quit the DMK. Now, Azhagiri’s in the cold.

In such a situation, the best the US and others could do was to give force to Sri Lanka’s own Lessons Learnt and Reconciliation Commission’s recommendations  that rights violations during the last stage of the war be investigated. There were other weighty issues­—like the pullout of troops from the north, now that the LTTE was extinct—so that civilians who were evacuated could get back home. Other countries were against a totally negative resolution against Sri Lanka. They wanted the positive developments of the last four years mentioned—like the return and resettlement of over 1,50,000 displaced civilians, the readiness to effect a three-language policy, and announcement of plans to hold elections to the Northern Provincial Council. Exclusive focus on war crimes was unlikely to carry weight with the majority. In such a situation, there was no way the UPA could give in to Karunanidhi’s impossible demands, driven in part by the competitive Tamil Nadu politics of demonstrating zeal. In the end, he found no way to wriggle out.

Anyway, it was an unequal arrangement from the very outset, as Sonia Gandhi was beholden to him for delivering 40 MP seats in 2004, helping the Congress return to power. Under pressure, Prime Minister Manmohan Singh allowed Karunanidhi the portfolios of his choice, eroding, in the process, his own authority as the prime minister. For some time, Karunanidhi had his way: he got his grandnephew Dayanidhi Maran dropped after he fell out with his son Azhagiri. Then he got Dayanidhi reinstated after making peace. The worst Manmohan was put through was when he was unable to drop A. Raja after the 2G scam exploded on the national stage; he acted only after AIADMK chief and Karunanidhi rival Jayalalitha promised external support.

By raising the stakes over Sri Lanka, Jayalalitha has succeeded in forcing the DMK out of the UPA. And the final push was given by Karunanidhi’s second son and prince-in-waiting, M.K.  Stalin, who threatened to quit if the DMK did not leave the UPA. His elder brother and Union minister M.K. Azhagiri has been kept out of the loop and is seething with anger. But he is biding his time, because Sri Lanka is an emotive issue in his southern Tamil Nadu base. With the DMK out of favour and the AIADMK looking at a post-poll tie-up with the BJP, the Congress will be left with no allies in Tamil Nadu. Even otherwise, no one is expecting the Congress-led scam-tainted UPA government to get a third term.

(S. Murari has reported for the Deccan Herald from Colombo and Chennai)