Intellectuals want change, but not without the freedom to disagree 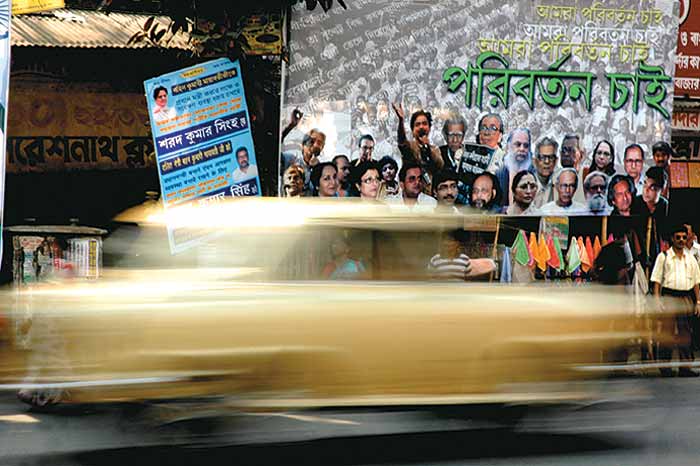 The Bengali bhadralok, a class that epitomises sobriety, culture and political awareness, is today a confused lot. The bafflement has its roots in the wind of change that has been sweeping across Bengal for the for the past two years. On the one hand, there is a growing awareness among them that the three-decade-old rule by the CPI(M)-led Left Front is on its way out. On the other, there is apprehension about how this change will play out in reality, and what it means for them and their beloved Bengal.

Their hope, laced with anxiety, stems from the fact that Mamata Banerjee and her Trinamool Congress, which is likely to grab power in the next assembly elections due in May 2011, perhaps in an alliance with the Congress, is an unknown quantity. Will the change of guard lead to peace, prosperity and development for Bengal? Will it bring an end to the corruption, nepotism and arrogance that a large number of Bengalis had started to associate with the CPI(M)? Or will it push open the gates of pandemonium, where developmental stasis will be the order of the day, unless it’s a pet project sanctioned by the Trinamool, or more precisely by its chief, Mamata Banerjee?

“It is going to be a one-person rule,” writer Sunil Gangopadhyay told Outlook. “She seems to be winning the people’s mandate but Mamata is yet to state clearly what programmes she will pursue when in power,” he added. He referred to Mamata’s oft-quoted claims of turning Calcutta into London without bothering to spell out how she plans to do that.

Gangopadhyay’s concerns may be valid, but some may see them as biased, for he is known for his proximity with the ruling Left Front. However, his views are being debated in different sections of the Calcutta intelligentsia—the writers, musicians, actors, sportsmen and filmmakers who form the creative upper crust of the Bengali bhadralok. “It is almost a foregone conclusion that Trinamool is coming to power in West Bengal,” legendary footballer Chuni Goswami told Outlook. “There is nothing wrong in a change, especially one that comes after a long time. Let us wait and see what it brings.” 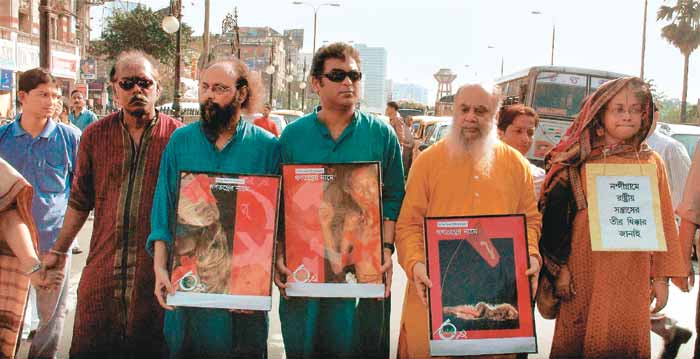 The Nandigram incident alienated intellectuals from the Left. The gain was Trinamool’s.

Some of the doubts stem from the curious progress of a very public test case: the ugly fracas involving popular singer Kabir Suman, who joined the Trinamool during the phase of huge intellectual estrangement from the CPI(M) that characterised the Nandigram agitation and later won the Lok Sabha election from Jadavpur. Suman threatened to resign from the party in 2009 citing obstructionism from local Trinamool leaders, some of whom he accused of misusing funds meant for development work. He also had a vicious quarrel with painter Suvaprasanna, a prime mover in Trinamool’s band of intellectuals. Suman  openly supported the tribal movement in Lalgarh, composed songs for its leader Chhatradhar Mahato and opposed the anti-Maoist Operation Green Hunt, causing much embarrassment to Mamata. Amid loud protestations of not compromising his freedom of expression, Suman resigned in March 2010, but was mollified well enough to stage a quiet volte face.

Traditionally, Bengali intellectuals have been politically conscious and many have been part of politico-cultural movements like the one led by the Indian Peoples’ Theatre Association in the 1940s and 1950s. Many others retained their independence and refused to join any political outfit. For instance, noted Bengali writer and poet Annadashankar Roy went against the popular current by refusing to write an article for a weekly against the Chinese after the 1962 Sino-Indian conflict. Similarly, film-maker Satyajit Ray did not hesitate to come out with a public condemnation of China during the Tiananmen Square massacre of 1989, even though he was aware that it wouldn’t have gone down well with leaders of the Left Front.

But, over the years, many intellectuals seemed to have lost that freedom. Under Buddhadeb Bhattacharya, wags started deriding “buddhijibis”—the Bengali word for intellectuals—as  “buddhajibis”, or those who earn a living out of Buddhadeb’s patronage. Nandigram came as the first serious breach in the Left citadel: a large number of intellectuals hitherto close to the establishment resigned from the various posts they held and took to the streets to protest the police atrocities against the people of Nandigram, in East Midnapore district, where the government was planning to develop a chemical hub.

Nandigram engendered an atmosphere of ferment in Bengal, which helped  bring Mamata, then licking her wounds after the 2006 assembly polls drubbing, to the political centrestage. Today, it’s being asked whether many of the erstwhile “buddhajibis” were trying to become “didijibis”, a clear reference to those intellectuals who have started enjoying Mamata’s patronage.

“In today’s Bengal, an intellectual or a creative artist cannot survive unless he belongs to a political party,” Bratya Basu, thespian and TV actor, told Outlook. He is unapologetic about joining the Mamata camp and now openly campaigns for her. “When I did not belong to any political party, I was harassed endlessly. The CPI(M) has taught me that to survive as an artiste in Bengal one has to choose a political camp.”

Yet, it’s precisely this prospect of intellectuals cohering around the establishment in a cosy compact—in effect, a continuation of the status quo, with a mere superficial change of hue—that troubles many. Noted thespian Bibhas Chakraborty, who resigned from the Natya Academy after Nandigram, voices the ambivalence: “There is no doubt that people want a change and Mamata is the rallying point for them.” But asked if he thought an artist’s freedom of expression will be respected under the Trinamool, he said that must be guaranteed. “We are entering unchartered territory. We will have to strive for freedom of expression, in particular the space for a dissenting voice.”

Many public figures, including those who were there at Nandigram, are sceptical whether the new regime will allow any such freedom once it realises its policies too would form the subject of public debate. As filmmaker Aparna Sen says, “People of Bengal want a change. But I don’t know whether Trinamool is the answer. I want to keep my independence, respond on issues I think are important. I don’t think this can be done if one joins a political party.” Actor Kaushik Sen concurs. He says nothing will change unless civil society is willing to speak against any anti-people policy. “A mere change of guard will mean nothing unless we can bring about a change in our attitude and philosophy and force the new government to pursue a path of development, peace and prosperity for all.”