The first world in our ancient history, it can't be painted out 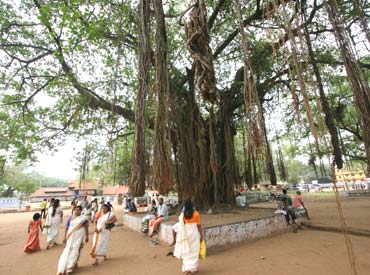 outlookindia.com
-0001-11-30T00:00:00+05:53
For history buffs who’ve done the rounds from Panipat to Plassey, Kodungallur is the place to visit. It seems, at first glance, like any unpretentious temple town. But those who know their history will recognise this Kerala town as India’s gateway to the civilisations of the world at a time when the term "globalisation" was several centuries away. This bustling trading port for spices and precious stones was known to Greeks, Romans and the rest of the world as Muziris or a variant of it (a latinised ‘Muchiri’ or cleft lip in Malayalam denoting the way the Periyar opens into the Arabian Sea here), well before the idea of India and a century before Christ was born.

It features in the writings of Roman naturalist Pliny the Elder (AD 23-79) who wrote the following about journeys to the Malabar coast: "If the wind called Hippalus is blowing it is possible to arrive in forty days at Muziris.... Travellers set sail from Muziris on their return to Europe, at the beginning of the Egyptian month of Tybia, which is our December, or at all events before the sixth day of the Egyptian month Mechir, the same as our Ides of January; if they do this they can go and return the same year." The story of Hippalus, the merchant who accompanied Greek scholar Eudoxus on his voyage to India and after whom the congenial winds are named, itself goes back to 110 BC.

Being a trade gateway is not the end of the story. What is seen today as India’s defining trait—cultural and religious plurality—was engineered first on the soil of Kodungallur. The assimilation that we now take for granted was a result of the default dynamics that this tiny place unleashed centuries ago. St Thomas is said to have landed in 52 AD and founded the first church here, and then at six other places on the Malabar coast. The very first mosque in India was built here in 629 AD, courtesy the last Chera king, Cheraman Perumal, who according to oral history, is said to have died on his journey back from Mecca. The Jews arrived here in 69 AD after the desolation of Jerusalem and built a colony. The Romans set up a temple of Augustus; the Syrian Christians later came with Thomas Cana; Buddhists and Jains had already made it their home—in fact, there is a theory that the masjid was earlier a Buddha viharam. Then, of course, there is the 2,000-year-old Thiruvanchikulam Mahadeva temple and the ‘most powerful’ and controversial Hindu goddess at the Sri Kurumba Kavu. 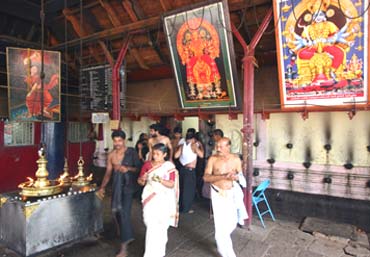 Devotees at the Sri Kurumba temple

That was history. Pre-history and classical literature too have their claims upon Kodungallur. Elango Adigal, the celebrated author of the Tamil epic, Silapathikaram was born here; as a result, the story of Kovalan, Kannagi and her famed pair of anklets has links to this place. Kannagi, the goddess of chastity in the Tamil mindscape, is also deified here at the Sri Kurumba temple. Besides the temple, ‘Kannagi Travels’ and ‘Kannagi Tourist Home’ in the town-centre keep her cult memory alive. Besides Sangam literature, people also cite references to the place in the Ramayana, Mahabharata, and Kalidasa’s Raghuvamsa. Ancient astronomy texts say that Kodungallur had a decent observatory around 860 AD.

So much for the past, what about the present? Well, you have to look hard to find history in Kodungallur now, for it does not flaunt its connections with the past. What you see won’t be enough—you have to get the mind’s eye working as well, and look below and beyond modern accretions. In fact, there’s a mask of modernity over everything here. As we stand next to the signboard of a Nair chit fund company, ironically titled ‘Onnukure Ayiram’ (One Minus Thousand), the only thing ancient visible is the banyan tree in the Sri Kurumba Bhagavati temple complex and a fleet of Ambassador taxis. There’s also the many signs and symptoms, not necessarily pleasing to the eye, of the place’s remarkable loyalty to the globalisation concept. A town with just two main streets blocks your view of the sky with hoardings of international brands. "The proximity to Kochi, just 40 km away, has made this town a commercial backwater," explains Manu Achuthath, the town’s oral historian. 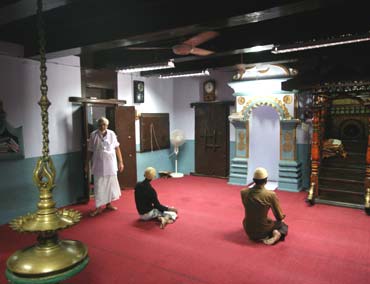 Facing east: The prayer room inside the 7th century Cheraman Juma Masjid. Some of the door frames are a thousand years old.

Looking for antiquity in the 7th century Cheraman Juma Masjid is like a treasure hunt. There is nothing except for the tablet-stone to suggest its historic importance. The 86-year-old muezzin, Syed Mohammed, who has held the job since he was 17, says this is the only mosque that does not face Mecca, but looks East. The mosque has been periodically altered, new blocks added and painted thick. But then the muezzin tells you that the wooden door frames, now painted glossy brown, are a thousand years old. The claim has been confirmed by a carbon-dating process.

The Marthoma shrine which contains the holy relic of St Thomas on the banks of the Periyar also rather successfully disguises its past links—it now wears the look of a holiday resort. But look around carefully and there’s a map indicating the journeys of St Thomas and the routes of the apostolic times, tucked away on an inside wall of the shrine.

The Sri Kurumba temple is the centrepiece of the popular but controversial festival of Minam Bharani, which involves the ceremonial pollution of the goddess’ shrine. "The Minam Bharani or cock festival is known for the raucous and erotic devotional practices of its participants," says M.J. Gentes, a cultural anthropologist. Till a few decades ago, a bloody sacrifice of hundreds of cocks would take place at the temple during Minam Bharani, but now that is banned. What survives are the lewd songs sung by devotees for the presiding goddess. Gentes has a theory that "the mystery cults of the ancient Near East are similar to those observed during the Bharani festival". Others say it’s the ritualised remnant of an old violent reclaiming of a Buddhist/Jain institution. Travel here in March-April and you can witness this "non-Brahmin revelry" in what could pass for a Brahmin stronghold.

Appu Menon of the ‘Kerala Book House’ situated near the Sri Kurumba temple says that ‘Kodungallur’ is a corruption of an ancient phrase ‘Kudakallur,’ which some experts say means "a sea town where the sun sets". As you drive out you feel it is so true about the town, or else why would it have become a mere footnote, despite the himalaya of history it is home to?

Kodungallur is about 40 km from Kochi

Calcutta: One Saintly Morning, 26 Years Ago