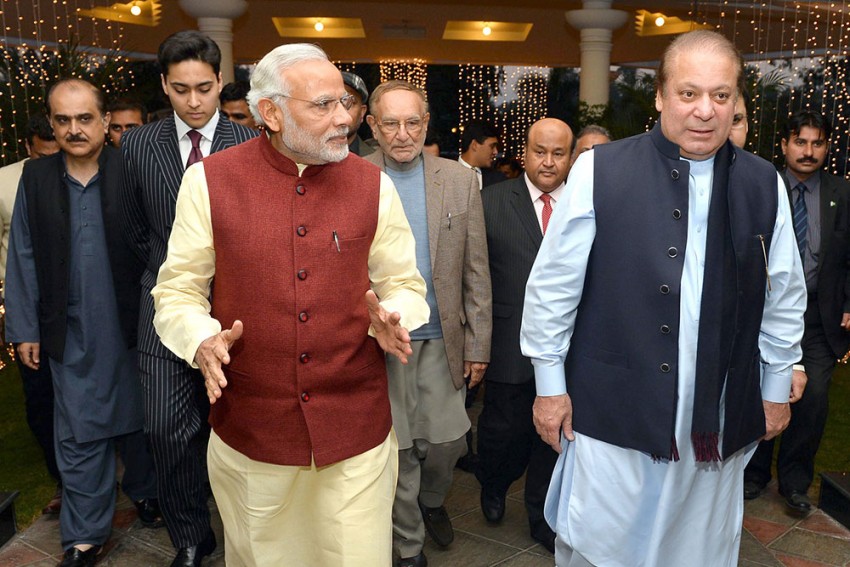 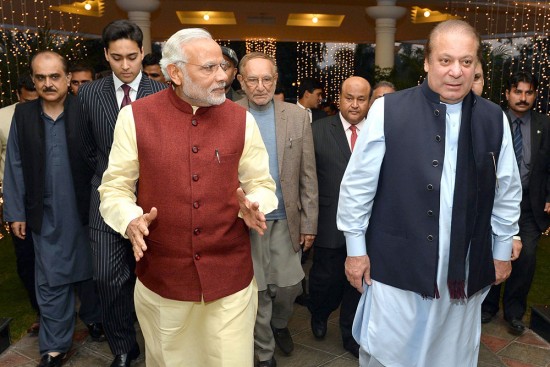 Lots of Pakistanis love Lata Mangeshkar, but they hate India. Many Indians love Rahat Fateh Ali Khan, but they consider Pakistan a terrorist country. Recently, a young batsman of the Pakistani cricket team told me he wants to “become Virat Kohli” but he is always reluctant to accept that in public. Some days back, I met movie star Shahrukh Khan in Dubai. Interviewing him for Geo TV, I tried to discuss the importance of peace and tolerance for the people of India and Pakistan. But his media managers shouted: “Don’t enter red zones.” I never realised that the world’s biggest movie star has no star power to speak on peace and tolerance between his country and its neightbour. Over the last few days, I feel that’s equally true of our prime ministers, Nawaz Sharif and Narendra Modi. The two elected leaders can say a lot but find it difficult to move fast in the direction of peace and tolerance.

I have met Sharif many times after his December 25 meeting with Modi in Lahore. Each time, he was anxious to improve relations with India, and was very optimistic when India allowed Pakistani investigators to visit the Pathankot base, where terrorists had struck. But the day the team was to reach the base, Lt Gen Asim Saleem Bajwa, the Pakistani army spokesman, announced the arrest of a “RAW agent” called Kulbhushan Yadav in Balochistan. Information minister Pervez Rashid was present at the press conference but spoke not a word on Yadav. The Pakistani media pounced on this and taunted that maybe Sharif and his ministers were not happy about the arrest. Some jingoists on social media declared Sharif an agent of India’s spy agency, the Research and Analysis Wing, or RAW. Modi faces similar taunts, and rivals ask, “Do we have an ISI agent as a prime minister now?”

But there’s a difference. Sharif is a conservative trying to become liberal, and finds himself facing accusations from rightist supporters and past allies. Can we trust India after Yadav’s arrest, they ask. And Modi, a right-winger, finds his Pakistan policy under attack from liberals and seculars. Who should India deal with in Pakistan, Sharif or the army? they ask. The Pathankot attack and Yadav’s arrest have together dealt a big blow to the peace initiative. Now, as India seeks access to JeM founder Masood Azhar, Indo-Pak relations are getting tense.

So why is Sharif facing difficulty in selling his peace-with-India policy to some people around him? I think it is necessary for Indians to understand the Pakistani establishment’s concerns.

Many India-haters in Pakistan look at Modi’s appointment of Ajit Doval, a former intelligence officer, as NSA with suspicion. Doval served in Kashmir in the 1990s and has also spent time as an undercover agent in Pakistan. They say Doval’s primary task is not to bring about peace but to destablise Balochistan. After seven long years, they quote South Asia expert Christine Fair from a Foreign Policy magazine article of 2009 as evidence of Indian involvement in Balochistan: “Having visited the Indian mission in Zahedan, Iran, I can assure you they are not issuing visas as the main activity. Moreover, India has run operations from its mission in Mazar (through which it supported the Northern Alliance) and is likely doing so from the other consulates it has reopened in Jalalabad and Kandahar along the border. Indian officials have told me privately that they are pumping money into Baluchistan.” For this article, Fair was naturally condemned in India. But Pakis­tan too described her as an “Indian agent” and denied her a visa when she alleged in other writings that the Pakistani establishment had links to some non-state actors in Afghanistan and Kashmir. 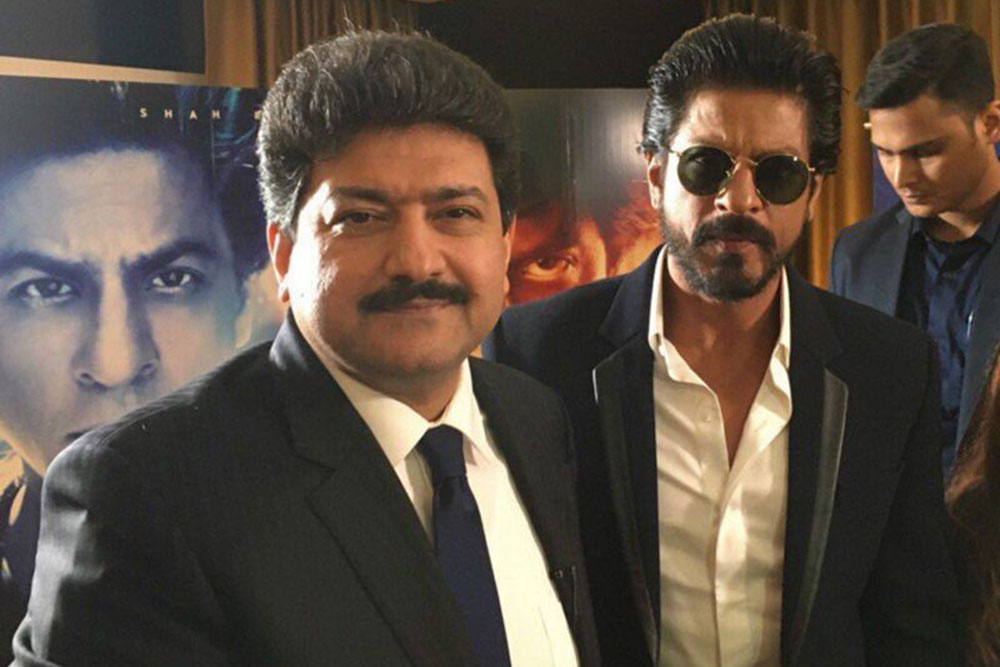 The situation between India and Pakistan is such that Shahrukh Khan cannot speak peace and a Pakistani cricketer cannot say he looks up to Kohli.

To be sure, Fair is not the only scholar or policy wonk alleging that India is creating problems for Pakistan via Afghanistan and in Balochistan. Laura Rozen, another expert who is often quoted by India-haters in Pakistan, wrote in Foreign Policy: “‘While the US media has frequently reported on Pakistani ties to jehadi elements launching attacks in Afghanistan, it has less often mentioned that India supports insurgent forces attacking Pakistan,’ a former intelligence official said. ‘The Indians are up to their necks in supporting the Taliban against the Pakistani government in Afghanistan and Pakistan,’ the former US intelligence official who served in both countries said. ‘The same anti-Pakistani forces in Afghanistan also shooting at American soldiers are getting support from India. India should close its diplomatic establishments in Afghanistan and get the Christ out of there.’”

That brings us to an incident in Afghanistan that is pouring fuel over the current antagonism. In 2014, American forces arrested a Pakistani Taliban leader, Latifullah Mehsud, while he was moving with Afghan intelligence officials in the Logar area. The arrest was first disclosed by the Washington Post and he was handed over to Pakistan. When Sharif offered Modi cooperation in the probe into Pathankot, suddenly a video of Mehsud surfaced in which he claims Pakistani Taliban get help from Indian and Afghan intelligence. The video also includes an old clip of a Doval speech. Pakistani television channels suddenly highlighted this mysterious video.

Soon, Modi-bashers in Pakistan appeared on TV claiming that when the Pakistani army launched Zarb-e-Azb against terrorists in its tribal areas bordering Afghanistan, India started heavy shelling across the LoC, claiming more than 30 lives, injuring 50, and displacing some 20,000 people. These critics say that US-made F-16 jets played an important role in bombing Pakistani Taliban hideouts, and that this was why the US provided Pakistan eight more F-16s. When India summoned the US ambassador in Delhi to convey displeasure over this assistance, India-haters ascribed it to an Indian connection to the Taliban. Even defence minister Khwaja Mohammad Asif said, “India is trying to help Pakistani Taliban.”

So even though Pakistan NSA Nasir Janjua and Doval share good rapport and Janjua has a very positive personal opinion about his Indian counterpart, these incidents—especially the shelling along the LoC­—have provided an opportunity for India-haters to claim that India is not happy about the situation in the volatile tribal areas becoming normal. Add to that Modi’s visit to Bangladesh last year, during which he proudly accepted India’s role in the 1971 break-up of Pakistan and its surrender—which is, of course, something the generals cannot forget.

Last but not the least, the BBC’s report on Indian agencies funding and training Muttahida Qaumi Movement (MQM) militants of Karachi has weakened the peace lobby’s case in Pakistan. The MQM was an ally of military dictator Pervez Musharraf, and when he was in power, MQM leader Altaf Hussain delivered an anti-Pakistan speech in Delhi. He even spoke of the breaking-up of Pakistan. But no action was taken. Now, under Sharif, the MQM faces treason charges. But some army generals still support Hussain’s former patron Musharraf. The military dictator was ready to resolve the Kashmir dispute ignoring UN resolutions, and even Kashmiri leader Syed Ali Shah Geelani called him a traitor to the Kashmiri cause. But Musharraf faces no resentment in Pakistan. And Sharif, who has never even hinted that he’s ready to forget or give the go-by to UN resolutions, is a RAW agent for our super-patriots! He’s a security threat because he wants peace with India!

There’s an impression in Pakistani army circles that Modi tries to dominate and pressure Pakistan to start talks on Indian terms and that this is unacceptable. But the fact is that, though Pakistan may have provided India some leverage by initiating talks and then stepping back on some issues for the sake of goodwill, Sharif has always stood firm on core issues and their resolution. So it is with Modi. Popular leaders cannot afford U-turns in politics; they can only make some adjustments to reach win-win solutions. Sharif and Modi are doing just that, chained as they are by contradictions of their own.

They need to move slowly and carefully. Both must realise that double games will not work. They must forget the Kulbhushan Yadavs and Masood Azhars. Peace is the only option for the two nuclear powers of South Asia. Sharif must do something so that Modi att­ends the SAARC conference in Pakistan in November. Mod must do something so that talking on peace with Pakistan does not become a “red zone” for showbiz stars on both sides of the border.

Kulbhushan Yadav, who Pakistan arrested and claims is an Indian spy, is a former navy officer—this much India is willing to concede. India says that after he left the navy, he’s been engaged in business in Iran.