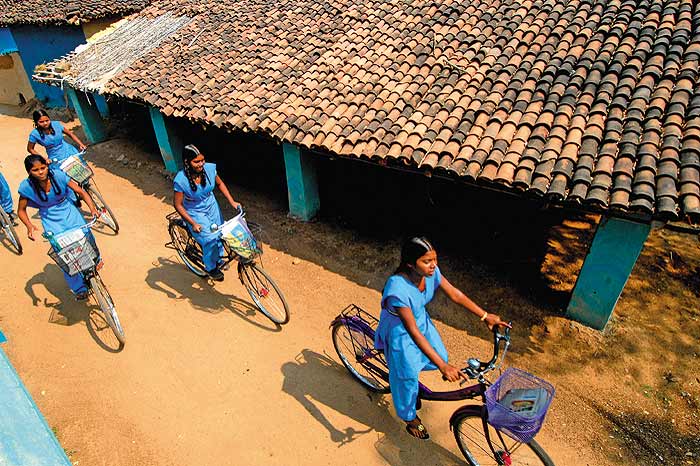 If it is a truth universally acknowledged—to role reverse the opening lines of Pride and Prejudice—that a woman in the peak of her youth must be in want of a suitable husband, then in remote Chhattisgarh this Austenean view is now being put to the test. For a state that usually reports mass child marriages, low performance on most human indices and a seemingly unending insurgency, there’s some good news seeping in. Swimming against our habits of seeing is also a village that proves the opposite.

Such as in Paorkheda, one of the remotest villages in the forests of Durgukondal in Kanker district, home to the Gond tribe. The roads to this quaint village with neatly aligned blue-coloured mud huts may not yet be properly motorable, but the girls here can certainly hold their own. Meena Tandiya is a shining example of this: the 26-year-old is the primary breadwinner in the family of three—Meena and her parents—and for her marriage can wait. “I can do without a husband. But how will my parents do without me, how will they sustain themselves on a pension of Rs 600?” she asks, adding that her salary of Rs 1,000 as a cook in the local school, supplemented by her parents’ pension at least gets them three meals a day. Meena may be among the oldest girls in her village who haven’t yet married, but she isn’t in a minority. In Paorkheda, which houses about 75 families, over 20 girls above the age of 18 are unmarried. Even beyond, in neighbouring villages and towns, we meet literally scores of unmarried women: anganwadi workers, students, teachers, farm labourers, homemakers, among others, who are miraculously far removed from the conservative view that come her 18th year, a girl must be packed off to the best suitor in the line.

It’s apparent in the numbers: Family Welfare Statistics 2011 point to a pretty drastic turnaround. A nearly 80 per cent drop in child marriages in Chhattisgarh, the deepest dip after Jammu and Kashmir in the country. In Paorkheda, these figures actually take life. “Child marriages were regular affairs in my days,” says Ram Bai, 65, Meena’s mother, who was barely 12 when she married. “But no girl here has married before she turned 18 in at least five years. My son and other daughter are married; having Meena with us is a huge support. We will marry her off when we find an educated boy with a good job, but we are in no hurry.”

Chhattisgarh has seen a nearly 80 per cent drop in child marriages, the deepest dip after J&K in the country.

A trend of late marriages is clearly setting in, thanks to a variety of reasons; with family economics at the top. Having a daughter stay at home works out well for a family where both parents need to work on the fields, and there are siblings to be looked after. Rameeta Poodu, 20, is a case in point. She has never been to school, and now looks after her four younger siblings and cooks for the family while her parents work on their fields or take up odd jobs under the NREGA scheme in off season. Rameeta is dressed oddly, an old school skirt worn beneath her half-torn kurta; carefree, childlike and thoroughly disenchanted with the idea of getting married. “I never want to get married,” she says emphatically, but after a second thought puts in, “Okay, maybe not never. Perhaps after a few years.”

But unlike Rameeta, most of the girls in Paorkheda attend the local school. Many have even been sent 20 kilometres away to Durgukondal. Sumitra Bai’s 21-year-old daughter, who studies there, has received a string of proposals of late, but her mother is not impressed. “Let her finish her studies first. Then we’ll see about her marriage.” Perhaps what has worked in the favour of late marriages are state schemes such as the Metanin programme. Savitri Kuldeep, 27, a ‘metanin’ worker in Paorkheda, along with four other women, helps fellow residents with safe deliveries, provides nutrition supplements for children and keeps a check on underage pregnancies—in effect, child marriage. “The metanin programme has helped create an awareness about how important it is for the mother to be the right age and healthy. It hasn’t been easy to get people used to these concerns. I had to visit each house several times to drive home the message,” says Savitri. 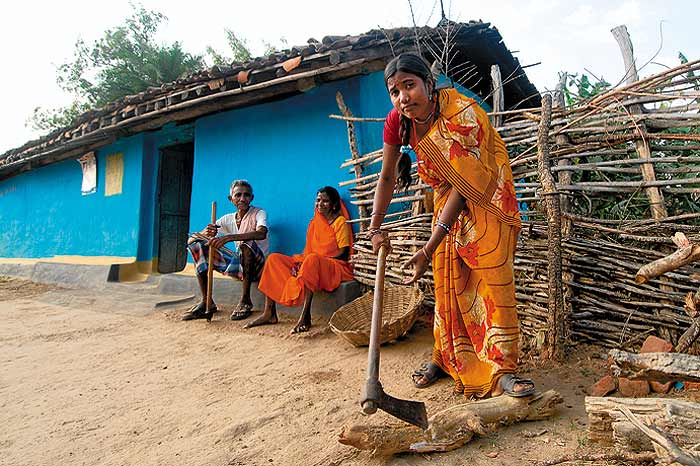 Her parents’ hope Meena Tandiya, with her parents. (Photograph by Sanjay Rawat)

Consequently, just one underage marriage in the recent past has threatened to break Paorkheda’s clean record. In 2010, an underage (16-year-old) girl from a neighbouring village eloped to move in with her 22-year-old partner, a boy from Paorkheda. The villagers raised an alarm and the girl’s parents lodged a complaint with the police. The marriage was put on hold; the couple finally tied the knot a few weeks ago—after she turned 18.

There is, of course, a sense that the women themselves are driving this change. About 40 kilometres north of Paorkheda, just off NH-43, the village of Korar is witness to a similar drift. At the government secondary high school, the principal, K.K. Dandiya, has his hands full. Just this year, the school introduced Class 9 and 10, and 57 students from three villages have enrolled. The board exams are later this month, and in last year’s merit list, the girls topped. He hopes to see a repeat this year. “The only time we face an issue is during harvest time, when children take leave from school to help their parents in the fields. But there have been almost no dropouts in the last few years, and this year we have more girls than boys studying in this school,” he shares. We follow the girls home to village Korar in their trendy new bicycles, a popular state incentive given to girls studying in Class 9 to enable them to get to school. Seema Mahuan, 18, wishes she was one of them, dressed in starched blue kurtas, with textbooks piled into bicycle baskets. But Seema dropped out of Class 9 two years ago after her mother passed away, and now takes care of her younger siblings. “I don’t want to get tied down right away, which is what will happen once I get married. I like the freedom in my own home, I like doing things my way,” says Seema.

Her cousin, Babita, 18, who cycles some six kilometres to her school in Bhanbeda, a neighbouring town, has other parameters when it comes to tying the knot. “I won’t marry till I find a man who has at least finished school,” she says. This reminds Devanti Maho, 40, of the time when she got married, at the age of 13. “At that time, marriage was centred around the parents’ choices; I had not even seen my husband till we were married. But I know it’s going to be different for my daughters. One is 20 years old, and there is no way I can marry her off without her consent. We are scared too, what if they go and commit suicide?” she says, referring to a recent case in a neighbouring village where a couple consumed poison after being boycotted by their families for marrying out of caste. But caste isn’t nearly as important as “looks” and “education”, feels Ajit Ram Mouhaan, 43, who married when he was 32 and is now a father of three school-going children, two girls and a boy. “Nowadays, you can’t just get anyone married to anyone, the girl’s and boy’s consent matters much more than ever before.”

To be sure, the government holds an annual mass marriage for young men and women of marriageable age who may want to tie the knot without their parents’ consent to barriers like caste and creed. Now with greater acceptance of late marriages by the tribes themselves, the villages here are only too aware that this could indeed be a turning point for the youth in the forests of Chhattisgarh.