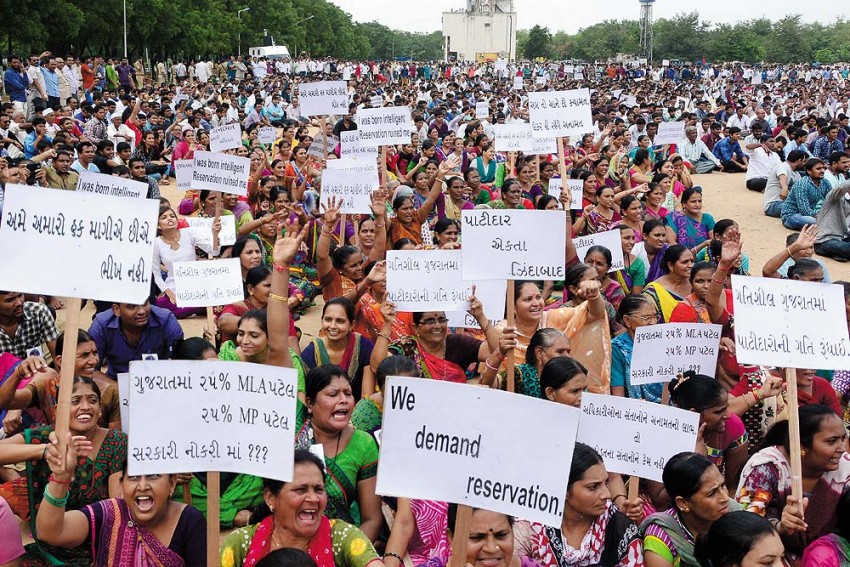 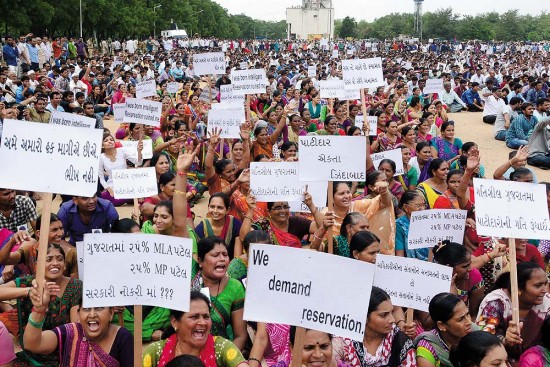 Politics in India has a way of turning on its head when the caste card comes into play—usually around election time, when community leaders strike the gong to tell politicians in power it’s payback time. With elections to self-government bodies in Gujarat due in September-October, chief minister Anandiben Patel will face her first test after having taken over from Narendra Modi, who moved to Delhi as prime minister last year after a 12-year stint in the state. But right now, Gujarat’s first woman chief minister is facing another challenge, one from her own Patidar community: an agitation in north Gujarat, led by a young upstart called Hardik Patel, is rekindling the old, sporadically raised demand of other backward classes (OBC) reservation for Patidars (or Patels).

The stir, under the Patidar Anamat Andolan Samiti (PAAS), has been gaining strength over the past week, even turning violent in one place, Visnagar, a town in Anandiben’s native Mehsana district. While worry lines crease Anandiben’s brow, Hardik exhibits confidence far bey­­ond one in his early twenties. “There’s no question of backtracking,” he says. “We’ve had a string of succ­essful rallies. Police permission or not, 52 more are planned across the state, to culminate in a mega rally in Ahmedabad on August 25.”

In Visnagar, on July 23, the protesters had ransacked the office of BJP legislator Rushikesh Patel, a protege of the chief minister. Police had had to use teargas and lathicharges to disperse protesters. Permission for the next rally, in neighbouring Vijapur on July 28, was cancelled. Even so, despite heavy police bandobast—and a downpour—some 25,000 turned up for the rally. Hardik’s threat that attempts to thwart PAAS rallies would result in “violence never witnessed before” reflects that defiance.

But questions abound. For one, why an agitation now and all of a sudden? And how come a colt like Hardik, who hails from Viramgam, in Ahmedabad district, has mustered rallying strength in north Gujarat, with bases like Visnagar, Mansa and Kharod (where Anandiben was born). It might be noted that Vis­nagar is hardly 12 km from Modi’s home­­town Vadnagar, and that BJP president Amit Shah has roots in Mansa. Also, why has there been no movement in the Saurashtra region, where the Patels have considerable strength and influence? The choice of place, the organisation of the stir down to village level, though it’s spearheaded by one so young, gives ground to suspect the guiding hands of BJP leaders inimical to Anandiben.

Hardik and his lieutenants might deny it, but at play are the rivalries within the BJP. Anandiben was handpicked by Modi as his replacement. There was never an iota of doubt about that—within or without the party. Modi’s iron grip over the party and the government left no scope for even a sliver of opinion or ambition: any sign of dissent or eagerness for office was quashed ins­tantly. But with him away in Delhi, these forces have broken free.

Though both the government and the party are headed by Patels—Anandiben and R.C. Faldu, the state BJP chief—groupism thrives. It’s common knowledge that there’s no love lost between Shah and Anandiben, and though Shah may be busy in Delhi,  in Gujarat, the sniping and power play continues. Anandiben also does not share comfortable vibes with Purshottam Rupala and Dilip Sanghani, Patidar leaders from Saurashtra, for long pushed to the sidelines.

North Gujarat has its fair share of Anandiben opponents. Finance minister Nitin Patel, who is from Mehsana, was number two in the Modi cabinet and had openly shown interest in being the next chief minister, but was ign­ored. He remains largely neglected in Anandiben’s cabinet too. While almost all BJP leaders, including Patel ministers, have maintained studied silence on the PAAS agitation, Nitin Patel put his foot in his mouth: he first declared the reservation stir wouldn’t affect the government or the BJP—then promptly declared he was misquoted.

For CM Anandiben Patel, handling this agitation and the local body elections in Sept-Oct could prove a crucial test

Economically and numerically strong, the Patidars have deep feelings of community kinship and it has helped them grow from tenant farming to dominating social life, business, the professions and politics. They form 14 per cent of the population and have 21 voter representation, but they have eight ministers (including Anandiben) in the cabinet. Forty-two of the state’s 182 MLAs are Patels. Besides, they dominate the education scene with scores of schools and colleges. Sidelined when Congress chief minister Madhavsinh Solanki came up with the KHAM formula—the Kshatriya, Harijan, Adivasi, Muslim combination—to win an unbroken record of 149 Congress seats in 1985, the Patidars switched allegiance to the  Chimanbhai Patel-led Janata Dal and later the BJP to keep the Congress at  bay in the elections since Solanki’s time. That’s more than 25 years.

Interestingly, despite the overwhelming majority in 1985, Solanki could not hold on to power as a violent anti-reservation agitation broke out soon after he hiked quotas for OBCs to 27 per cent. The very Patidars who are demanding OBC status today were then in the vanguard of that anti-reservation stir. That agitation had taken on communal colours and resulted in Rajiv Gandhi moving Solanki to Delhi as a Union minister. Now, the heat of an agitation for reservation is set to singe one of their own.

Anandiben is trying to find a way to contain the north Gujarat stir. High-level party and government meetings have been held. The opinion is that kid gloves are called for, more so because the stir has erupted in Anandiben’s home district. Also because it’s the youth of the community who are leading and organising the agitation.

Outreach programmes have been chalked out and socio-religious organisations of the Patels, such as the Maa Umiya Mata Trust and Khodaldham, are also being roped in to calm down tempers among youth and prevent violence. Some 500 groups have been formed to spread messages via the social media. And the level of concern can be gauged from the fact that Modi is being kept appraised of developments daily.

What is all the more worrying for Anandiben is that the agitation and its outcome could affect the results in the local self-government elections. Six of the eight municipal corporations in Gujarat, each one of them under the BJP’s control for over a decade and half, will choose new representatives over the next two months. Will Anandiben, who began her career as a school teacher and principal, pass that test?

By R.K. Misra in Gandhinagar