The way we are playing now, nobody needs to do us any favours. The boys are raring to go. They recognise how close we are to lifting the Cup. 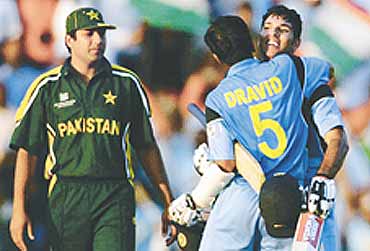 outlookindia.com
-0001-11-30T00:00:00+0553
Our chances of reaching the World Cup semi-finals look bright, but we still have to win a couple of matches in the second phase to be fully assured of a berth. And we have to play really well—we don't want to be the fourth team to qualify because, in all likelihood, Australia will be on top of the heap. They already have 12 points and the team finishing fourth will play the Super Six toppers. We want to meet Australia in the final instead. The venue of the semis—Durban or Port Elizabeth—doesn't make a difference to me. What matters is who we play against. Before we come to that stage, of course, we have to keep up the momentum and do well in the second phase.

I believe South Africa were very unlucky to have got their calculations wrong in their last match against Sri Lanka. The way they were kicked out of the tournament was very unfortunate. If only Boucher knew how much he had to score to win at that point, he wouldn't have played the defensive stroke. If South Africa had won, they would have not only been in the second round but also in a strong position. The West Indies, I would say, were the unluckiest team in this World Cup—their match against Bangladesh was rained out, leading to their exit. That's why I feel there should have been a reserve day even during the first round of the World Cup. Then South Africa, West Indies and other deserving teams would have made it to the Super Six. I don't understand what logistical difficulty people are talking about when they say that they cannot afford to have a reserve day. That's poor reasoning. Having an extra day for a match is not going to seriously affect hotel bookings or travel plans.

Having said that, I don't agree with people who say that with teams like South Africa, West Indies, Pakistan and England out of the tournament, it has taken something away from the World Cup. No charm has been lost. There are still some good exciting teams left which have a great live spectator pull.

I wouldn't say that the exit of good teams has benefited us. If we were in a weak position, not playing to our potential, maybe I would have said that. But the way we are playing, I don't think anybody has to do us any favours. Sachin Tendulkar is batting brilliantly. He is really loving the opener's job again. Sehwag has had great starts. But his scores do not reflect how well he has been batting throughout this tournament. I myself am meeting the ball well after the hundred against Namibia. Dravid is playing his role perfectly. Yuvraj and Kaif are playing very well. Our bowlers too are doing their job. That's why there wouldn't be any change in the composition of the team in the Super Six phase.

Harbhajan and Kumble will give us a lot of thought. Depending on the opposition and the conditions, we will rotate them. Otherwise, everything else is the same. I don't see the need for change. The balance is just fine.

The boys are all raring to go. They realise how close they are and they know they have a chance of lifting the Cup and are approaching the task single-mindedly. After beating England and Pakistan, their confidence levels are soaring. I maintain that we had just one bad match and that was against Australia. After that defeat, it was obvious that if we played well, we would still qualify. Now, as I said earlier, we have to sustain the mood and the tempo to do well in the Super Six.

We look at Kenya as the kind of team that could be dangerous. They have nothing to lose. They are not the strongest side in the world but they have proved to be fatal to some good teams in the past. If they can manage just one win, they have a good chance of being in the semi-finals because of the points they have carried forward into the second phase. Our next match is against Sri Lanka, who have played well in this tournament despite a defeat to Kenya.Murali and Jayasuriya will be the key for them. For a team that hasn't had a great record overseas, they have surprised everyone with their game in South Africa. They are a strong contender for a semi-final slot.

New Zealand, whom we play last in the Super Six, are a very good one-day side. We are not going to face them worrying about how they beat us in the series we played just before the World Cup. To us, they are just another team we want to beat. They have a good attack and a batting line-up that can surprise any bowling force.

Our aim for the rest of the World Cup is to play to our true potential against these very good teams.

The man with the most difficult job takes time out to give a unique perspective on the road ahead. He is covering the World Cup exclusively for Outlook.