We know something the West doesn't. Song 'n dance can hold up a film. 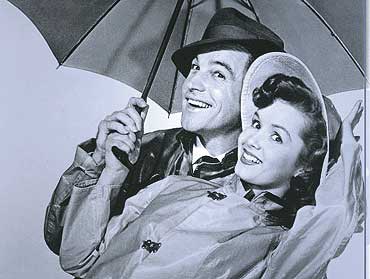 outlookindia.com
-0001-11-30T00:00:00+0553
There's more in common than we might imagine between early Hindi talkies and the Hollywood musical. When Warner Brothers developed the Vitaphone sound-on-disc system that first gave cinema a voice, Broadway star Al Jolson did not hesitate to leave the stage for a successful career in the movies. Jolson became the world's first movie star after he sang in the otherwise silent film, The Jazz Singer (1927). When Ardeshir Irani made India's first sound film, Alam Ara (1931), he too looked to theatre for inspiration.

Following the 1929 Wall Street crash, many New York theatres were forced to close, prompting a flurry of stage stars, like Fred Astaire, Eddie Cantor and Fanny Brice, to head for Hollywood. Librettists and choreographers, including the famous dance director, Busby Berkeley, soon followed. Berkeley developed a highly cinematic language for choreography by using revolving stages, mirrors and shooting close-ups, top shots and the most unusual camera angles for dances. In India too, many early screen performers came from the theatre, and found that their strong singing voices and dancing skills gave them a major advantage.

Through the 1930s and '40s, the Hollywood musical was the preferred family entertainment—synonymous with the golden era of American popular entertainment. This was particularly true during the Great Depression, as big-spectacle musicals offered an escape from the daily struggles of many Americans. In addition, they were nearly always romantic and an ideal vehicle for the popular "happy ending". Adding dance to the mix introduced yet another established art form to cinema—choreography—with much to offer in the way of cinematic spectacle.

In India too, dance found its way into cinema with a variety of forms giving early sound cinema wonderful material from which to draw inspiration. Early examples of special note are J.B.H. Wadia's The Court Dancer (made in Hindi and English) and 1948's Kalpana, an effective, surreal dance fantasy directed by Uday Shankar. Shankar's film is nearly entirely woven around dance and is an extraordinary work, suggesting a path that Indian cinema could have followed but never did. Perhaps because his style of film choreography was so individual, its impact was only noticeable in a few works—the most famous examples being Ghar aya mera pardesi (the three-part song-and-dance sequence that begins as a dream and ends as a nightmare) in Raj Kapoor's Awaara (1951), choreographed by Madame Simkie (Uday Shankar's associate) and the amazing drum dance in S.S. Vasan's Chandralekha, choreographed by Jaya Shankar's team. Indian 'filmi' dance has over the years become recognised in its own right, and is on a par with the best film choreography anywhere.

On the US stage, however, song and dance routines—with the exception of opera—were confined to 'the musical'. On screen, a musical was synonymous with pure entertainment—as though song and dance by definition lightened the tone. This is still the case today: a film critics' Top Ten poll in 2002 by the UK's Sight and Sound magazine, had only one musical, Singin' in the Rain (1952), at No. 10. This could explain why the West has, until recently, been dismissive of Indian movies, unable to think of them as anything other than lightweight romantic musicals.

The reality is different. In India, the use of film music has never been seen merely as popular and escapist, perhaps because its origins lie in classical, folk or urban Indian theatre traditions. These are rightly understood as established art forms, with virtually no distinction between narrative, music and song. So, unlike a majority of their Western counterparts, Indian audiences can sit as comfortably through song-and-dance routines in films with a heavy political tone (Bombay) as they can in comedies (Munnabhai MBBS). 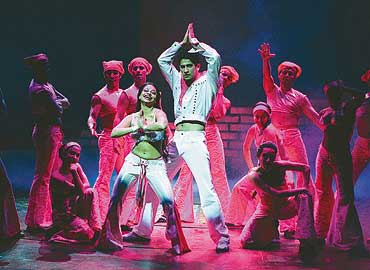 Love for the classic Hollywood musical faded by the '70s, though rock-'n- roll era movie Grease was a big hit in 1978. Yet the musical is a resilient genre that lends itself to reinvention. Whenever an imaginative director like Bob Fosse (Cabaret and All that Jazz), Baz Luhrmann (Moulin Rouge) or Rob Marshall (Chicago) comes along, the audiences' appetite is revived once more. Interestingly, the Hollywood musical has gone back full circle: recent Broadway hits like Billy Elliot, The Producers, Chitty Chitty Bang Bang etc are adapted from or inspired by movies. And whilst Western audiences have lost much of their interest in screen musicals, it is worth noting that on Broadway, 24 out of the current 30 shows are musicals. No surprise then that Andrew Lloyd Webber's Bombay Dreams (music by A.R. Rahman and choreography by Anthony Van Laast and Farah Khan) has had more mainstream success in the West than any Bollywood film has managed so far.

(Nasreen is a London-based filmmaker and author)