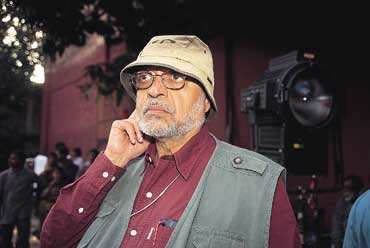 Shyam Benegal
By Sangeeta Datta
Lotus Roli Rs 350; Pages: 276
Not all accidents are bad. In the 1970s, when the number of Hollywood films coming to India was reduced due to the licensing policies of the times, cinema halls suddenly had a surplus of empty screens in the cities. Exhibitors decided to give these to "offbeat", "non-formulaic" cinema that found takers in an English-speaking middle-class audience less interested in mainstream Hindi films.

Sangeeta Datta’s book on Shyam Benegal tells me that the happy coincidence was a factor in giving a push to a whole generation of new wave directors into the foreground of entertainment and to one of the best among them—Shyam Benegal.

In a career that over 28 years has produced 20 feature films and many television series, Benegal’s work has been nothing if not daring, different, experimental, without being arrogant, with his distinct voice unafraid to say things that most others would be content to leave buried. Rural, urban, middle class, business class, Hindu, Muslim, Christian, he has explored it all. And that effortless but unshakeable support for women that lies at the core of his vision, how can I not feel admiration for that! That unmuddied affection he calls not "a conscious choice to portray women characters" but, instead, his "predilection"— how can one not adore him for that.

His is a warm, humane view of life which comes through clearly in the career graph that Datta traces in this book. She describes all his films in quite a bit of detail which was enjoyable because it’s like experiencing many diverse stories at one time. As I read the synopses of his films, I felt great regret at not having seen so many of them, especially the lesser known ones. There is a real striking one from 1977 called Kondura about a young Brahmin who is told the power of a boon will stay only if he stays celibate. The fellow shuns his wife but what is he to do about the pangs of lust he feels for the landlord’s daughter-in-law. He sits in the temple praying but sees visions of the beautiful girl. This results in his raping his wife who kills herself. The young Brahmin ends up running out in the fields calling desperately for the sage who granted him the boon, crying to take it back. This is raw stuff. As is the struggle between mother and daughter for one man in Bhumika where Smita Patil’s character marries the man her mother is involved with just to spite the old lady. This is one onscreen mother and daughter relationship that is opposite of what we are told it should ideally be and at the same recognise as painfully real.

These twists of drama and dark sides of human relationships, not to mention the social reality that unfailingly pervades the rock-solid plots of his films, this is exactly what kept me riveted to the book. Not the writing or the structure or the brief description of his life but the wonderful storytelling which involves the viewers in Benegal’s films themselves. In fact, Datta keeps a formal distance from her subject unlike the intimacy with which his films represent his worldview. Yes, there are interesting bits that tell us that Benegal grew up in a very politically charged environment, with a Gandhian father, a communist elder brother and a younger one who was an rss member. And passages which quote him talking of his father who he said "had this notion that we had to be taught what we needed to learn and what we wanted to learn we would learn ourselves."

But these are biographical sprinklings, that’s all. Yes, it’s sweet to hear Shabana Azmi call Benegal her "reluctant guru" or Om Puri being amazed by this "walking encyclopaedia who knew even the history of the safety pin", but the book does not magically conjure up the person before our eyes. Datta doesn’t write with the full-bodied depth with which Benegal made his films. And that’s what a good book about a good person should do—make him appear in our lives. But that’s messy work. ‘Studies’ have to be left to the academician, but for the rest of us, a biographer must get her hands dirty. As Geoffrey Wall does in a heartbreaking biography I am reading of the French writer Gustave Flaubert. With the very first sentence you just know you are going to take a shahi snan in the kumbh of a great man’s life. You just know the biographer felt as much passion for his work as his subject felt for his own.

And that’s what I would have loved to experience in this account of Benegal’s life. Nevertheless, as a director myself, when I see a repeat situation of the ’70s happening today with satellite TV invading the world of entertainment and niche multiplex halls demanding something other than formula films, I find myself hoping for another new wave of storytelling in cinema. I find myself hoping for more Shyam Benegals.