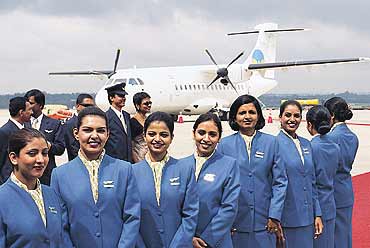 Launched with much fanfare two weeks ago, Air Deccan aims to capture the southern short-haul routes connecting small towns to big cities in Tamil Nadu, Karnataka and Andhra Pradesh. In another month, Captain Vivek Sane of Visaa Airways will start similar flights in the western region—connecting Mumbai to Pune, Surat, Kandla and Belgaum. While Visaa intends to serve free food on the plane, its fares will be as cheap; Mumbai-Pune will cost a mere Rs 850, compared to Rs 650 you pay for a first-class railway ticket.

And that's not all. Remember ModiLuft, which went down under some time ago? It now wants to take off as a low-cost airline under a new name, Royal Airways. Even Air-India was toying with a similar idea on international routes, but the proposal was rejected by its board last week. Says Jitendra Bhargava, spokesperson, Air-India: "Globally, everyone from Singapore Airlines to Swissair is looking at this option." He adds that United Airlines has set aside 40 aircraft to pursue a similar strategy.