This is as big as it gets. An India-Pakistan clash is more than sport—the very self - image of the two countries hinges on it. 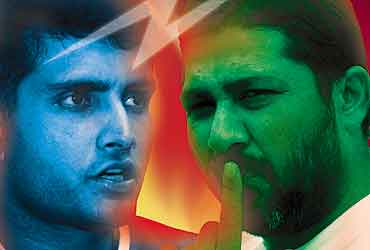 India-Pakistan is the pinnacle for cricket rivalry, beating the Ashes by miles. But there's one critical difference. Enthusiasm is generated around the Ashes through verbal beamers by key players. With five months to go before the first Ashes coin is tossed this year, Glenn McGrath has already marked Andrew Strauss as his prime target. In the subcontinent, while the support cast erupts, the protagonists try to keep the war cries on a public leash.

Pakistan captain Inzamam-ul-Haq, as soon as he discarded the gladiatorial outfit he had donned for a commercial, admitted to an unabashed admiration for Sachin Tendulkar's batting, calling it "educational", and praised rival skipper Saurav Ganguly as a "very inspirational leader of men". The Bengal Tiger has paid back in kind, saying that Haq was "quite good as captain" and that "I enjoy playing against him".