Pirates Of The Caribbean: At World's End

What began as a thrilling and engrossing entertainer ends up as a terribly tedious franchisee -- the convoluted plot leaves you more confused than involved. 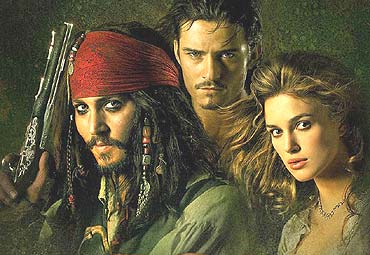 What began as a thrilling and engrossing entertainer ends up as a terribly tedious franchisee. The third, and hopefully the last, part of Pirates of the Caribbean suffers due to a bad overload. There’s too much of all the familiar elements. The same old characters, from Jack Sparrow (Depp) to Barbossa (Rush), from Elizabeth Swan (Knightley) to William Turner (Bloom); the roguish, wily and bizarre crew, the infinite sword-fights and sieges—there’s a "been there, done that, seen it" feel that’s hard to shake off. On top of this, the convoluted plot leaves you more confused than involved. There are far too many characters, innumerable story strands that invariably end up in sea battles and you are unable to grasp any of them. To put it simply, it’s all about pirates coming together to fight the East India Company wanting to wipe them off the high seas. This UN summit-like meeting of pirates even has a token Indian presence in the form of a sardar pirate. How representative! The chief foes of the pirates are Davy Jones and Lord Beckett. In between, there are innumerable knotty sub-plots involving a Singaporean pirate (why did Chow Yun Fat have to do this?), the rescue of Sparrow’s ship, Turner’s now-on-now-off love for Liz and some mumbo-jumbo about the mythological Calypso— the keeper of Jones’ heart. Besides them, there’s also a shivering monkey and some silly parrots on board.

With his kohl-lined eyes, bead-adorned hair, Depp plays the rakish Sparrow with characteristic hippy abandon. He is particularly good as he hallucinates and talks to his multiple alter-egos. But the swagger, the constant playing to the gallery also begins to grate, and the character becomes a caricature of itself. Rest of the cast are on an automated mode, Knightley is poutily pretty and Bloom more a limp loser than a full-blown hero. The humour, more of a broad farce than dry Brit wit, gets tiresome. The film is a rollercoaster ride, but through a phantom world, and the final battle is a bow to The Lord of The Rings. Verbinski clearly needs a new inspiration.