More infantile than entertaining. A highly awkward and tepid climax ends things with a whimper. 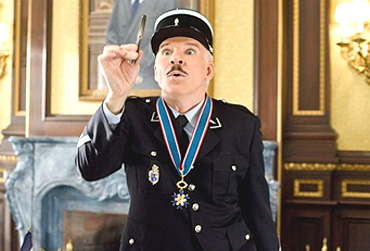 I spent much of the viewing time in studying the finer aspects of Aishwarya Rai’s makeup. Hadn’t she used too much concealer around the eyes? Was she not looking too chalky and drab? Much of these uncalled for observations happened because the film offered little else to hook me. The bumbling Inspector Clouseau (Martin) returns to solve the case of the mysterious Tornado who hits the global treasures, from the Shroud of Turin to the Imperial Sword in Kyoto. The clever thief even runs away with the Pink Panther diamond. A dream team of investigators culled from across the world, which includes our very own Ash, begins their chase. Surprisingly, Ash’s nationality is left vague, the rest do get defined.

There are a few funny slapstick moments—the catch the wine bottle scene in the restaurant that Clouseau literally puts on fire or his misadventures at Vatican when he "becomes" the Pope and hangs on to his life. There are odd one-liners and a few funny exchanges. Sample: "I do speak English," says one character (in English mind you), to which Clouseau replies: "Prove it". But the film is more infantile than entertaining. A highly awkward and tepid climax ends things with a whimper.

Peter Sellers had a knack of turning the silly into something sublime; with Martin silly just gets sillier. Forget Ash, the film wastes an entire set of fabulous actors—Andy Garcia, Jeremy Irons and Alfred Molina. What’s worse, they didn’t seem to be having any fun playing loony either.

To Light A Bedside Blaze