Have they achieved it all? Hollywood could provide some cues. 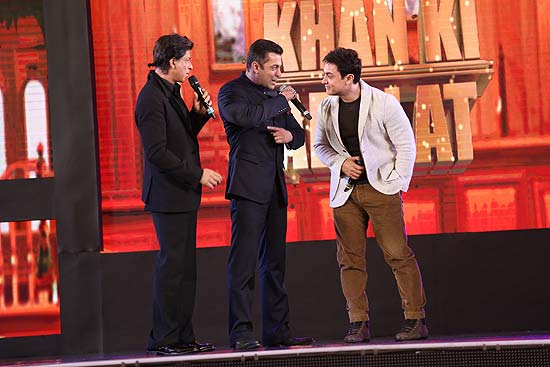 I first encountered The Khans around 10 years ago, when I was still very new to Indian films. The three superstars were then all on the cusp of turning 40, and were all in the process of reinventing their careers, as their triple throne looked to be threatened by age and wear.

After more than a decade as a prolific chocolate hero, Aamir Khan’s work in Lagaan launched his transformation into the figure he is today, with a reputation for exacting perfectionism and a persona that edges on—okay, that sometimes barrels straight into pretentious and sanctimonious. Salman Khan seemingly misplaced the gentle Prem archetype on his way to the gym, emerging as the bulked-up Bhai, the action hero who, despite some off-screen trouble, still retains a touch of that old sweetness on screen. And, Shahrukh Khan, after a detour or two, wound up not so much creating a new persona as extending the shelf-life of the lip-quivering sensitive rogue avatar that made him a star.

Now, as they approach 50, none of the three Khans shows any signs of slowing down; each has already enjoyed multiple blockbusters this decade, each has developed his own impressive set of abdominal muscles, and each carries on the grand filmi tradition of romancing women 20 years or more their junior. So what’s to come for them as they reach the threshold of a half-century? Perhaps a look at some Hollywood heartthrobs who have reached this milestone can give us some clues.

Aamir Khan was still playing college student as recently as 3 Idiots, still executing shirtless action sequences in Dhoom 3. But perhaps George Clooney is a model for what Aamir might become in the next decade. Still a dashing figure, Clooney has in later years become involved in production and direction. He is now making forays into the political sphere, leveraging his stardom to promote issues of human rights. Aamir, with Satyamev Jayate, seems also to be training his sights at targets beyond the movie screen. Then again, with his control-freaky perfectionism, perhaps Aamir will situate himself behind the camera for a second innings, like Clint Eastwood has had as a director with both great critical and great commercial success. Before that happens, though, I would like to see him in more age-appropriate stories about adult men. Though PK is delightful, I hope he finds more human stories to tell—more Talaash, but with fewer ghosts.

Salman Khan is perhaps the most Peter Pan-like of the three actors; though his body has changed over the years, he sticks to comedy and action films, and has not ventured into as many substantive or dramatic roles as Aamir or Shahrukh. Perhaps Bruce Willis is a good comparison for him, still doing action films even as he approaches 60. Bhai’s legions of loyal fans will certainly allow him to extend his present avatar for another decade or more, as Willis has. Indeed, it’s difficult to imagine Salman doing anything else. I’ve read that he is reviving Prem for Suraj Bar­jatya’s next; perhaps he and Madhuri Dixit could be coaxed into a sweet middle-age roma­nce, something like Julia Louis-Dreyfus and James Gandolfini’s Enough Said.

Shahrukh is sometimes called the Tom Cruise of India, but this is a shallow comparison. True, Cruise was once a giant box-office draw, but he has since become a certified loon, and Shahrukh is far too image-savvy to go down that road. Tom Hanks is a better match. Like Shahrukh, Hanks spent the early part of his career as a romantic hero, gradually taking on weightier dramatic roles as he got older. Hanks has also established himself as a producer, just as Shahrukh has done in recent years. Truth be told, though, the orbit I see for Shahrukh is not a Hollywood orbit at all—it’s that of Amitabh Bachchan. Shahrukh will sidestep Amitabh’s regretful detour into politics and avoid the career downswing that the senior actor weathered in the 1990s. Instead, he will make a smooth transition into the kind of elder statesman role that Amitabh holds today, the kind for whom moviemakers create entirely new types of starring roles just to accommodate the vastness of the persona.

(Carla has been watching Hindi movies and refusing to check her brain at the door since 2005, when R.D. Burman’s music snuck up behind her and clocked her over the head.)