For 51-year-old Sonam Wangchuk—one of India’s most famous innovators—it’s now his life’s mission to find answers to the challenges faced by the native younger generation in Ladakh. 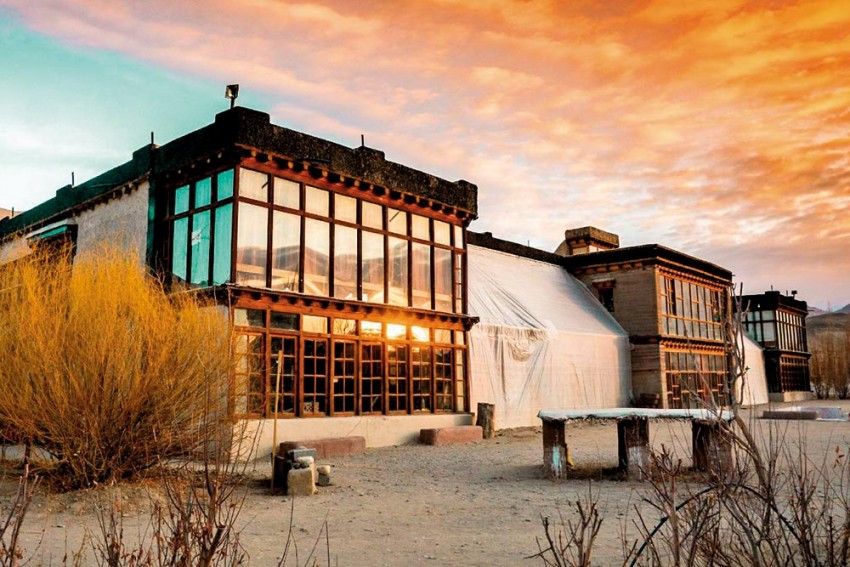 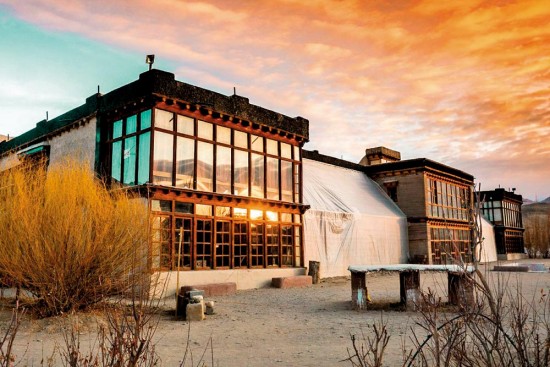 In the barren, lunar landscape of Ladakh, life throws up the harshest questions. Like in the winters, when temperatures plunge to –30 degree celsius and icy winds from the Himalayas rattle humans and animals to the bones. Or in the summers, when all the ice melts and the ground water runs off, leaving a parched valley gasping for a drop. For 51-year-old Sonam Wangchuk—one of India’s most famous innovators who even has a popular Bollywood character modelled on him—it’s now his life’s mission to find answers to the challenges. And to show Ladakh’s younger generation how to do it.

Wang­chuk was introduced to the world as ‘Phunsukh Wangdu’, played by Aamir Khan, in the 2009 Hindi blockbuster 3 Idiots. Last month, Wangch-uk’s dream project—the Himalayan Institute of Alternatives, Ladakh (HIAL)—began to take shape when the seniormost monk of the Phyang Monastery, Chetsang Rinpoche, laid the institute’s foundation stone. The institute will come up at Phyang Valley where the Buddhist monastery is loc­ated, around 14 km from Leh, the headquarters of Ladakh.

The idea for the institute had come to Wangchuk many years ago when he analysed why students of Ladakh were performing so poorly in the Class 10 board exams. A young engineer then, he found that Ladakhi children did not relate to anything in the textbooks taught in schools under the Jammu and Kashmir State Board. “It was so bad that 95 per cent of the students used to fail,” Wangchuk tells Outlook. “At that point, some of us started questioning why the system is like this and how to change it in a way that could bring it closer to the environment. That is how this school has come up.”

In 1988, along with a group of young Ladakhis, Wangchuk founded the Students’ Educational and Cultural Movement of Ladakh (SECMOL) for reforming the educational system of Ladakh. Wangchuk’s initiative was supported by the state government and village communities, and from a mere five per cent in 1996, the pass percentage rose to 75 in 2015.

According to Wangchuk, hundreds of students from Ladakh go to study in schools and colleges outside the region every year, and return with degrees and certificates. But the learning they bring back is of little help in tackling the problems peculiar to the Himalayan region. At SECMOL, ­however, students are encouraged to think outside the box, exp­eriment and put their ideas to use.

The mission is also in tune with a pilot ­project of the central government for schools to be started later this year, aimed at introducing nine life-skills, including problem-solving, decision-­making, critical thinking and creative thinking, through group discussions, role play, lab experiments, internships and field trips.

At SECMOL, the students are also motivated to care for the environment in this ecologically fragile region. Wangchuk had shown the way when he solved Ladakh’s water scarcity to some extent when he developed what are now known as ‘ice stupas’—water is blasted into the air, where it freezes instantly and turns into mounds of ice. Created during the winter, the cone-shaped snow, resembling Buddhist stupas, melts slowly over time and compensates for the lack of water around April-May. The first ice stupa created in October 2013 was 20 feet tall and lasted until mid-May, providing almost 40,000 gallons of water.

In 2016, the idea won the engineer-­turned-educationist the prestigious Rolex award for enterprise. Wangchuk put the cash prize of Rs 1 crore into turning his ideas for HIAL into reality, and began a crowd-funding initiative this year to raise an additional Rs 13 crore. He plans to run HIAL on the lines of SECMOL, which has a campus that depends solely on solar energy for cooking, lighting and heating, and is the only school in Ladakh that stays open through the harsh winter.

Wangchuk has already shown glimpses of what he plans to do at HIAL, which is slated to be a full-fledged university. “The university shouldn’t be a place for seeking certificates that make one eligible for jobs, but a vibrant place for res­earch on solutions to people’s problems. Students should be agents of change.”

On May 27, when the institute’s foundation was laid, students planted high-­density apple trees on the campus. High-density trees give higher yields in small plots and this was the first such initiative in Ladakh. “Apples respond better to changes in temperature bet­ween day and night,” says HIAL director Gitanjali, who uses only her first name. “As that change is higher in Ladakh, apples are expected to do better in the region.”

Warnings that climate change is putting a big strain on Kashmir’s apple production have come as encouragement for the idea of having apple orchards in Ladakh. “The conventional apple belts are going out of range. The higher reaches are taking that place,” says Wangchuk. “Kashmir may slip out, while Kargil and Leh may go on to replace it.”

Sonam Wangchuk (pic) was introduced to the world as ‘Phunsukh Wangdu’, played by Aamir Khan, in the 2009 Hindi blockbuster 3 Idiots.

At HIAL, the high-density apple orch­ard is spread over 300 kanals (around 240 acres). The government provided about 200 acres in Phyang Valley for the university, but some formalities, such as cabinet approval, are still ­pen­ding. Wangchuk, who was in Sri­nagar recently for talks with the government (this was before the ruling PDP-BJP coalition broke down), doesn’t want to waste any time. Until a legislation is enacted for setting up the university, he has decided to run a postgraduate ­programme in Integrated Mountain Development. The courses—applied ecology, entrepreneurship, res­ponsible tourism and sustainable habitat—will start this year, and each would be later developed into full-fledged independent schools.

HIAL will be all about learning by doing. The Swiss Institute of Sustainable Development and the Nepal-based International Centre for Integrated Mountain Development have agreed to collaborate with them. “The university will have the entire Himalayas, not only Ladakh, as its focus area. The heart of the university is the mountains. The students and the faculty will be from all mountainous regions of the world,” says Gitanjali, an MBA from Bhubaneswar who left a corporate job to join Wangchuk’s mission. “I was also head of a school where I found the educational curriculum so boring that I wanted to change it before my death.” She met Wangchuk in Mumbai, was impressed with his plans for the mountain university, and was soon headed for Ladakh.

“This university is all about how you improve life through innovations, by using traditional wisdom and combining it with modern technology,” says PDP leader Naeem Akhtar, who was minister for education in the erstwhile PDP-BJP government. “This can make an actual difference to the lives of the people. I think Wangchuk has arrived with a big idea and his area of operation is full of promise. We churn out students from the classroom and they end up facing problems in getting jobs. At the mountain university, however, the courses will mean jobs plus awareness and knowledge. It is not a classroom university, but a community-based one.”

In 3 Idiots, Aamir tells one his friends, “Bachcha, kaabil bano, kaabil…kamyabi toh…peeche bhagegi (Make yourself competent and success will follow, no matter what).” At HIAL, Wangchuk plans to do just that—prepare students capable of taking on the challenges in life. After all, in the unforgiving, icy heights of the Himalayas, life is all about innovating.