The characters and situations are supremely giddy and the film wears its silliness right there on the sleeve. 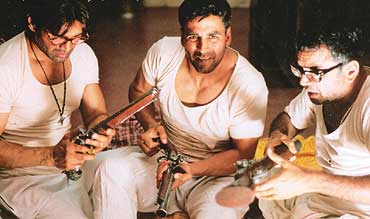 The film kicks off on a promising note. Nana Patekar’s introduction to the three protagonists—Baburao (Rawal), Raju (Kumar) and Shyam (Shetty)—the attempt to connect the present back to the past, recollecting crucial moments from the prequel—Hera Pheri—is all nicely managed. Thereafter, it’s all to do with your expectations. If you are a die-hard Hera Pheri fan, the sequel will come in as a huge disappointment. Primarily because the three actors have been playing similar characters in many other films, be it a Garam Masala, Deewane Hue Paagal or Mujhse Shaadi Karogi.

However, if you are in the mood for some mindless fun, then Phir Hera Pheri might serve you quite well. Most laughs here come from the fact that the characters and situations are supremely giddy and the film wears its silliness right there on the...