A dry, wry wit runs through the film, making you smile rather than laugh out loud 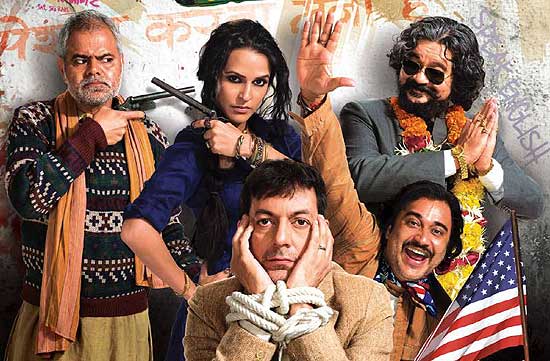 If America sneezes, the world has to catch a cold. Phas Gaye Re Obama is spun on a similar quirky concept—how recession in the US affects the well-oiled, institutionalised kidnapping business in a north Indian small town. There’s a bunch of likeable crooks, headed by the irrepressible Sanjay Mishra, finding it hard to survive. There are no bullets in the guns, no outgoing on the mobiles. But the English speaker amongst them (delightful Manu Rishi) dreams of progress and expansion. Things come to a head when an NRI (the ever-dependable Rajat Kapoor) returns home to sell his haveli to pay off his debts back in the US. Mistaken for a rich man, he gets kidnapped, only for the crooks to realise he is more a liability. Then on, it’s all about how this burden of a man is successively palmed off and very intelligently replicates the steady spread of recession itself, right down to government bailout coming to the rescue. A dry, wry wit runs through the film, making you smile rather than laugh out loud. It takes potshots not just at the kidnapping practice—like the ransom collection centre scene—but at our politicians and at the US too. The humour turns slapstick in the English-coaching class scene and gets unbearably coarse in the strands involving Neha Dhupia (female Gabbar Singh) and Amol Gupte (animal welfare minister). The filmmakers have obviously worked under budgetary constraints, visible in the tawdry frames. However, the big idea wins them the day.