Home  »  Magazine  »  International  » access to headley: us »  Phantom Under The Naked Bulb

Phantom Under The Naked Bulb

Forget getting Headley to India, will India get to Headley even in the US? 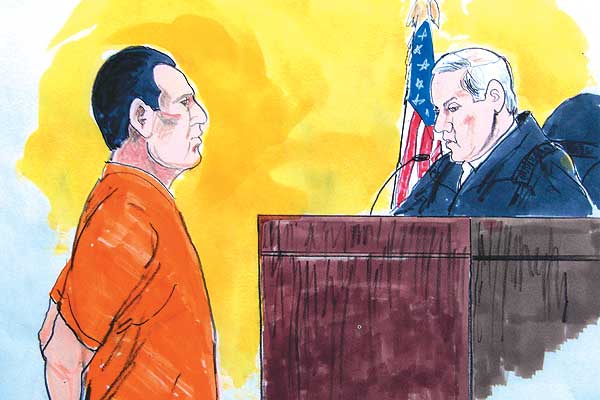 No Headway On Headley

The plea bargain effectively rules out Headley’s extradition to India

David Coleman Headley is one stray footsoldier of Islamic Terror Inc India is desperate to lay hands on. He’s the man who himself surveyed the targets of 26/11; he very likely directly knows those in the Lashkar-e-Toiba (LeT) hierarchy who had masterminded the horror of Mumbai. New Delhi’s attempt to gain access to Headley last year proved abortive, fuelling speculation on the reasons for the Obama administration’s caginess. Now the suspicion has compounded because of Headley’s surprise volte-face on his not-guilty plea in the Mumbai attacks and plots to hit targets in Denmark. Through his plea bargain, Headley has not only successfully warded off the possibility of a death penalty, he has also ensured that he isn’t extradited to India, Denmark and Pakistan.

Deeply aware of the resonance 26/11 has in the popular consciousness, the negative PR owing to US stymieing and the sheer mine of information Headley could provide on the terror apparatus based in Pakistan, New Delhi continues to press forward to gain access to him. What kind of access to Headley can India hope to get? Will he cooperate with Indian interrogators? Can India trust the information Headley furnishes? More important, is the US shielding Headley for ulterior motives?

To begin with, there is Headley’s attorney, John Theis, who told Outlook that his client had agreed to cooperate with foreign governments, including India, and would “make himself available to Indian officials...but only in the US. They’ll have to travel here”. His remarks belie the expectation of those who believe India could still have Headley extradited.

Not only this, the plea agreement struck between the prosecutors and the defence (Headley) doesn’t automatically provide Indian officials access to the terror suspect. That decision rests with the presiding judge—US district judge Harry Leinenweber in Federal Court in Chicago. As Joanne Mariner, an expert on counter-terrorism laws and policies at Human Rights Watch, told Outlook, “The defendant may say he’s willing to speak to foreign government interrogators, but it is for the judge to decide who has access to him. It’s not up to the prisoner who visits him in his cell.”

“(My client) would make himself available to Indian officials, but only in the United States.”
John Theis, Headley’s attorney

There’s also the issue of the quality of access India could get to Headley. Justice department officials, to begin with, declined to say whether Indian officials would be provided one-on-one access. Dean Boyd, a spokesman for the department, restricted his response to questions from Outlook to language used in the plea agreement. “As per the plea agreement, Headley will testify in any foreign judicial proceedings held in the United States by way of deposition, video-conferencing or letters rogatory,” Boyd said. (A letter rogatory is a formal request from a court to a foreign court for judicial assistance.) From his response, it would seem India’s interrogation of Headley would be severely restricted. There is, however, precedent for the US providing foreign investigators access to terror suspects in its custody. For example, investigators from a number of countries have been allowed to interrogate prisoners held in US custody at Guantanamo Bay, Cuba.

A Headley interrogation months after his incarceration began (on October 3, 2009) could also prove futile. Given the years of experience Indian investigators have in interrogating LeT operatives, they are certainly capable of sifting information gleaned from Headley that doesn’t fit the typical pattern of LeT operations. Problem is, even if the Indians feels Headley is lying to them, or not providing information beyond what he has stated in the plea agreement, they can scarcely do anything other than name him as a suspect in the Mumbai attacks and hope to prosecute him under Indian law—a likelihood that has been greatly diminished by the plea agreement.

“It’s up to the judge to decide who gets to have access to the defendant, not the defendant himself.”
Joanne Mariner, Human Rights Watch

It also seems India can do little other than raise the decibel level on Headley, whether demanding access to him or even his extradition. This is because India is still quite dependent on US assistance for intelligence on terror groups, and also for occasional tipoffs Washington provides about impending attacks. This seems to be true of the Headley case as well. It’s believed America’s Federal Bureau of Investigation (FBI) did share the results of its interrogation of Headley with the Indian team which went to Washington last year.

Yet there are aspects of the Headley case that remain a mystery. For instance, Indian officials will be eager to know when the US first put Headley under surveillance. It’s likely they had their eye on Headley for the past two years at the very least. If true, that would mean the US was aware of Headley’s unexplained movements between India and Pakistan before Mumbai was attacked but opted to protect its source of information, a fact that would cause much consternation in India. Again, the US shared non-specific intelligence with India prior to the Mumbai attacks, but it is not known whether the information came from Headley. Indeed, if the FBI was aware of Headley’s surveillance trips to Mumbai prior to the attacks, the US should have tipped India off. Indian officials would have picked him up and eventually unravelled the terror plot.

On the face of it, it seems that the Americans are wary of giving Indians free access to Headley. For instance, following his arrest on October 3, a team of Indian sleuths travelled to the US on an understanding that they would be given access to him. However, on reaching there, they were told that Headley couldn’t be made available for interrogation as his case was now in court. It fuelled suggestions that the Americans are reluctant to expose Headley to Indian investigators because they want to conceal the extent of their relationship with him—a fact that could have embarrassed the US since six of its citizens were among those killed in Mumbai. Headley, the son of a Pakistani diplomat and an American mother, was known to be a US Drug Enforcement Agency informant operating in Pakistan. Talk swirled around that he had turned rogue and switched allegiance to the Lashkar. Mariner says that the FBI may have been averse to any foreign officials “tampering” with their suspect, speculating that it perhaps has an internal rule that bars foreign governments from talking to prisoners before American interrogators are done questioning them.

From all accounts, though, India will remain satisfied as long as the US shares the information it collected during Headley’s surveillance and his subsequent interrogation. For, as Bruce Riedel of the Brookings Institution explains, “The information he may provide can be very important in helping us see inside the LeT and its ties with the ISI.”