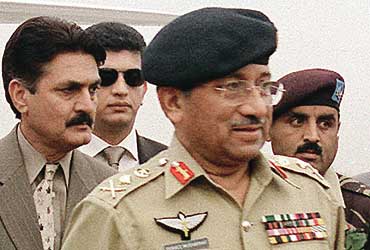 outlookindia.com
-0001-11-30T00:00:00+0553
You can't tell a general who is also the president what is legal and what isn't. You don't even know under what laws the executive decisions are being taken, in a situation where every constitutional provision is twisted to serve the purpose of those in power. As President Pervez Musharraf prepares to hold a contentious referendum to extend his tenure in office for another five years, and with the Jamaat-e-Islami petitioning the Supreme Court against the decision, there are palpable signs of yet another controversy confronting him. At the crux of it is the question: can the president simultaneously hold the office of the Chief of Army Staff (COAS)?

There are many, including those close to Musharraf, who think it is patently illegal for him to hold the twin posts of president and COAS. They say this is bound to become untenable considering that there are only six months left for the revival of the Constitution, under which the country is to go to elections in October. Explains Farhatullah Babar, a close aide of former prime minister Benazir Bhutto, "Under the Constitution of 1973 a sitting COAS cannot contest elections until two years have lapsed from the time he held that post." For Farhatullah, even the referendum is bogus. "The only legal way Musharraf can occupy the president's office is to come to Parliament and seek its approval," he says.

Ironically, those who want Musharraf to remain both the president and the COAS invoke the precedent of both Nawaz Sharif and Benazir Bhutto becoming prime ministers and yet heading their respective political parties. The argument was that if the prime minister didn't also remain party president, then an alternative power centre would develop to the detriment of his/her authority. Argues Gen (retd) Talat Masood, "Similarly, it will be very difficult for Musharraf to hand over power back to the army and become a simple president. He, after all, draws authority from the military."

But media reports emanating from Washington claim that some of his generals want him to appoint a full-time COAS, more so because of the situation Pakistan faces on both its eastern and western borders and also its involvement in the war against terror. As president in a democracy, they say, Musharraf would be too busy to find time for shouldering the responsibility of COAS. Says Shaheen Sehbai, former editor of The News, who's now in Washington, "If he goes for the referendum, he will have to rig it to win. If he loses, he will be kicked out by his colleagues in the army. The only option for his partners in power is to serve him a notice that if he loses the referendum, he would quit the COAS seat. That has probably been done already."

Sehbai's comment is bound to confuse those who harbour the impression that Musharraf is bound to resign were he to lose the referendum. He still has the option to go to Parliament post-October elections and seek a vote for his confirmation as president. Why, he could even declare the entire process null and void. In such an eventuality, the generals want Musharraf to relinquish the post of COAS. Their reason: since a defeat in the referendum would weaken Musharraf, they would want to insulate the COAS from the ripple effect.

What Washington thinks about Musharraf's plans counts immensely. Gen (retd) Mirza Aslam Beg, a former COAS, feels the Americans would support his decision to combine the two offices, just as it had in Gen Zia-ul-Haq's case. Says Gen Beg: "As COAS, Musharraf will ensure that all his reforms and policies as president are safeguarded. The dual charge will also protect and support all the policies and people who have been involved with him from the beginning." In other words, Musharraf without his uniform could run the risk of becoming just a ceremonial head, incapable of protecting Washington's interests.

Indeed, the COAS has always played a vital role in Pakistan politics. Gen Beg recalls the incident in which COAS Gen Waheed Kakar had to intervene in a dispute involving president Ghulam Ishaq and prime minister Nawaz Sharif in July 1993. Kakar, recalls Gen Beg, sauntered into the presidential palace and asked both Ishaq and Sharif to relinquish charge.

But many reckon Musharraf might not find it easy to garner the support of the West for his 'democratic' plans. As Hussain Haqqani, a close associate of Bhutto and Sharif, points out, "If reports in the western media are any guide, Gen Musharraf's honeymoon as a western ally is gradually coming to an end. Gen Musharraf will eventually have to look inward for support and while doing so he will have to shed the prejudices of Pakistan's cantonment culture." For starters, he will have to quit the post of COAS.

Goa's beaches and slums are the better for Jan Ugahi's work