Perth Pangs And After 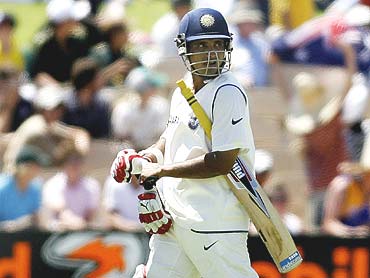 outlookindia.com
-0001-11-30T00:00:00+0553
The BCCI has a way of delivering up drama with the regularity of pratfalls in a farce. But to a cricket-obsessed nation, its sense of timing, so prized in batsmen, remains ungainly. The announcement of the ODI squad served to sour the dinner Anil Kumble hosted to celebrate the Perth victory. The reason: two former captains, Sourav Ganguly and Rahul Dravid, did not find berths in the team. And Ganguly appeared visibly upset at being overlooked.

Before long, there were reports of a schism in Team India between seniors and juniors. Ganguly sought to scotch such doubts saying he wasn't looking beyond Adelaide. "It's an important match and I've got to stay focused," he said. "I'll think of the future once it gets over." Though not in the sprightliest of moods, he was acutely aware he would be judged by his performance in probably his farewell Test in Australia.

ODI skipper Dhoni was cast in the unusual role of villain, largely because chairman of selectors Dilip Vengsarkar told some close friends that the team wasn't his choice—as if he were the sole selector—but the ODI captain's. On record, though, Vengsarkar explained the selection thus: "What is the point in picking some players whose careers will last just a couple of years? I may or may not be a selector tomorrow. But we have to build Team India with a futuristic projection (read ICC World Cup 2011) and we have opted for the best blend of players on the current tour."

Dhoni countered the controversy with consummate cool. "I think we should wait till we get to Melbourne for the T20 game before we take any questions about the ODI squad," he said two days before the Adelaide Test. When he was asked whether the announcement of the ODI team before the crucial Test would affect the team, he came up with a quotable riposte: "I think it has affected the journalists more than us."

Weak assertions that the BCCI could have been politic, not to say gracious, is being made. But such propriety hasn't ever defined it—not when Kumble was dropped, not when V.V.S. Laxman was excluded several times, including for the 2003 World Cup. Ganguly and Dravid could have been given the option of choosing a date to quit the ODI game. For instance, Ganguly could have been told during or, at least, at the end of the Pakistan series that he wouldn't figure in India's ODI plans. He scored 1,240 runs in 2007 but just 216 runs in nine home games, including a sole half-century in Nagpur that raised the hackles of not a few who thought he didn't exploit the power plays. Perhaps the BCCI could have organised visas for as many players as possible and deferred the selection of the ODI team to, say, the fourth day of the Adelaide Test.

The guy who came in from the cold, Ganguly is back in the freezer. He's aware that staging another ODI comeback depends on many factors—Tendulkar wanting a break or younger players, like Gautam Gambhir and Suresh Raina, failing to cement their places.