Pt Kishan Maharaj and his subtle, thinking tabla was our last link to the quartet of greats 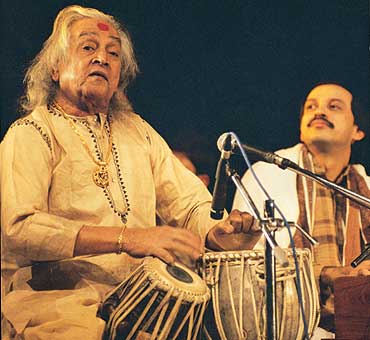 outlookindia.com
-0001-11-30T00:00:00+0553
For years, this house at Benares' Kabirchowra neighbourhood has been a landmark for the local people. Despite its pretty nondescript exterior, it nurtured a priceless tradition within. Inside, the walls were adorned with portraits of the great ustads, and at the end of the hall was a huge statue of Ganesha playing the pakhawaj. Day and night, the sounds of the tabla reverberated through the bylanes of this locality, as though providing a rhythmic counterpoint to the pace of life in this bustling city. This was the gurukul set up by tabla wizard Pandit Kishan Maharaj, who passed away on May 4, aged 85.

The death of the great master, a Padma Vibhushan recipient, leaves a huge void in the world of Indian percussion, for he was the last of the great quartet of tabla maestros—the others were Ustad Ahmedjan Thirakwa, Ustad Alla Rakha and Pandit Samta Prasad—who will all now live only on vinyl. All of them dazzled not just with their technical virtuosity, but because they were highly creative thinkers who raised the tabla from an accompanist's instrument to that of a solo instrument, and gave its best players the status of stars in their own right. "Pandit Kishan Maharaj, and the other great tabla ustads, gave the tabla samman—respect and dignity," says vocalist Pandit Ajoy Chakraborty, "raising it from a position where those who played it were paid just a few rupees...." Agrees Kiran Seth, founder of Spic Macay which has been instrumental in reviving the zest for classical music in India: "These people were a class apart. Today that thinking, that soch, is missing."

So with the last of the thinkers gone, will the world of tabla be the same again? Will it decline once again into merely an accompanist's instrument? Ask anyone today to name a great tabla soloist, and chances are they will name Zakir Husain and then fall silent. The son of Ustad Alla Rakha, he has not only kept alive his father's legacy, but gone beyond it to carve out a very special place for himself in the world of music. But he lives in America, so apart from his brother Fazal Qureshi and Anuradha Pal, who also learned from the father, few were able to imbibe that incomparable artistry.

There is little left of the illustrious legacy of Ustad Ahmedjan Thirakwa of the Faroukhabad gharana. His nephew Rashid Mustafa Thirakwa is an accomplished player, but the magic is missing. The Delhi gharana today is almost non-existent after its big exponents, Ustad Latif Ahmad Khan, Pt Chatur Lal and later Ustad Shafaat Ahmad Khan passed away. Lost too is the tradition of Pandit Samta Prasad, another of Benares' celebrated performers. Similarly, the Lucknow gharana's great tradition is more or less dormant in India—its premier exponent Pandit Swapan Chaudhury stays mostly in the US. The Meerut or Ajrara gharana, brought to prominence by the great Ustad Habibuddin, is hardly visible—or rather audible—today. While there are still some artistes of the older generation—Pandit Shankar Ghosh and Lachchu Maharaj and other senior and gifted tabla players like Pandit Anindo Chatterjee, Nayan Ghosh, Anand Gopal Bandopadhyay and Sanjay Mukherjee—who continue to carry the tabla tradition forward, they can't match the genius and star quality of the four greats. 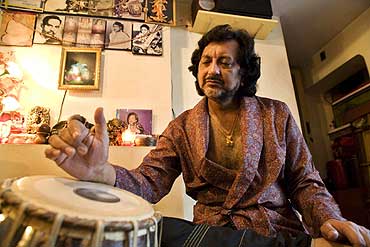 But thankfully, there is a new generation of tabla players who have the potential to take India's tabla tradition to great new heights. Among them is Kumar Bose, seniormost disciple of Pandit Kishan Maharaj who has imbibed much of his guru's profound and inventive artistry. "Pandit Kishan Maharaj was a person who had an impact on your music as well your life, like a philosopher. A strict teacher, he always stood for authenticity in his art," says Bose. Two other rising tabla stars are Sukhwinder Singh Namdhari and Sandeep Das, also proud bearers of Kishan Maharaj's legacy. The gurukul established by Pandit Kishan Maharaj may well produce a few more stars, because he was an inspired teacher who shared his knowledge and skills with his students with whole-hearted generosity and dedication.

But Kishan Maharaj was an exception, and many illustrious tabla traditions have been lost forever. Says renowned sarod player Pandit Buddhadev Dasgupta: "A lot of tabla gharanas have just faded away after their maestros passed away. Today, it may be difficult to have new thinkers who offer something new to the world. Going forward, we may have an amalgamated style with glimpses of many different gharanas fused in different ways."

Other musicians and experts are more optimistic about the future of tabla. Says Chakraborty: "Undoubtedly, it is the end of a yuga, but I am confident a new generation will arise to take the place of the old masters." Indeed, there are young tabla players who are fast gaining recognition—Shankar Ghosh's son Bickram Ghosh and disciple Tanmay Bose who are carrying on the Faroukhabad tradition; Samar Saha, disciple of Kishan Maharaj's contemporary Natu Ganguly; and Akram Khan.

Kishan Maharaj once said there are three stages in an artist's lifespan: diksha, shiksha and pareeksha (initiation, learning and an endless examination). It remains to be seen how well the new generation traverses these stages.