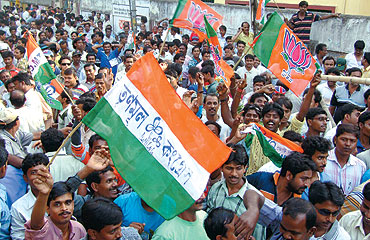 outlookindia.com
-0001-11-30T00:00:00+0553
The CPI(M) may have 'recaptured' Nandigram with brute force last November. But it lost it again on May 21 when the results of the panchayat polls came in from East Midnapore (where Nandigram is located) and the neighbouring South 24 Parganas (the site of the controversial Tata plant at Singur). For a party that's never lost an election in Midnapore in the last 30 years, losing as many as 37 of its 53 seats there and 47 of the 73 seats in the South 24 Parganas to Mamata Banerjee's Trinamool Congress has come as a rude reality check.

So much so that there is very little comfort in the fact that the CPI has won 13 of the 17 zilla parishads while the Trinamool and the Congress have won two each (the latter won 15 of the 25 seats in North Dinajpur and 19 of the 34 seats in Malda). It's the loss of face in Nandigram that the Marxists are finding difficult to stomach. The CPI(M)'s bewilderment can be gauged from the statement its powerful district secretariat member and key player in Nandigram's recapture Ashok Guria made: "People we counted on conspired against us. We helped them return home, but they voted against us. We don't know why this happened." A chastened CPI(M) state leadership, however, blames district-level leaders for failing to read the voters' minds. 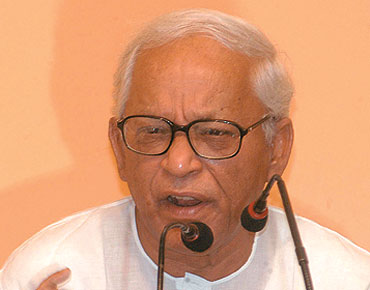 "People never really believed chief minister Buddhadeb Bhattacharya's statements that the plan to have a chemical hub at Nandigram has been scrapped," Mamata told Outlook. "That, and the absolute disgust with the CPI(M) for the anti-farmer and anti-people policies it is following, led to our victory at Nandigram." Pointing out how the Singur electorate too voted overwhelmingly against the CPI(M), the Trinamool chief said these verdicts amounted to a thumbs-down to the state government's policy of acquiring farmlands for industries.

That may be true of Nandigram and Singur but in districts like Purulia, Bankura, Burdwan and West Midnapore where larger tracts of farmlands are being acquired for industrial units, the Left's posted a clean sweep. As CPI(M) state secretariat member Madan Ghosh said, the problem wasn't the government's land acquisition policy but the manner it was executed in or sought to be executed at Nandigram and Singur.

In Singur, it didn't help that CPI(M) zonal secretary Suhrid Datta has been accused and arrested for hiring killers to rape and murder Tapasi Malik, a young Trinamool activist. The Jamait Ulema-e-Hind too played its part in the CPI(M) debacle in the minority-dominated areas of East Midnapore and South 24 Parganas. "I held meetings to highlight the poor plight of Muslims in CPI(M)-ruled Bengal, as brought out in the Sachar Committee report. I urged Muslims to vote against the anti-Muslim CPI(M) that is out to grab land owned by Muslims," said Jamait spokesperson Siddiqullah Chowdhury. The Jamait campaign had an impact in North 24 Parganas as well where the CPI(M) managed a very narrow victory.

Finally, disunity within the Left in South 24 Parganas and North Dinajpur delivered the two regions to the Trinamool and the Congress respectively. The fact that it has managed to wrest Murshidabad, albeit by a wafer-thin margin, from the Congress is only a small consolation to the Left. What is really worrying the Marxists is that the Opposition has either won by a respectable margin or narrowed down its margin of loss wherever it managed to mount a powerful challenge. And though this has happened only in small pockets, it's enough to make the Left realise that the ballot scores over the bullet.