“People Want The CM To Be Nominated By Modiji” 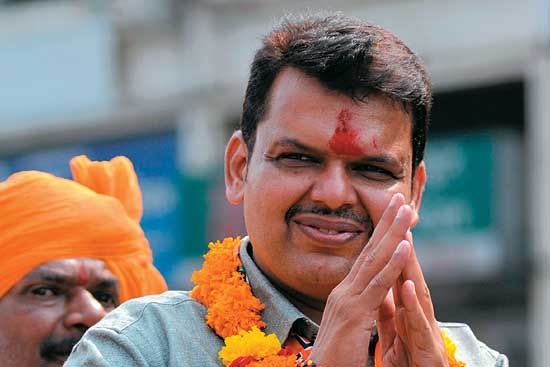 Devendra Fadnavis was elected a corporator at just 22, he became the second youngest mayor in the country when he was elected mayor-in-council of Nagpur five years later, in 1997, and now at 44 is the president of the Maharashtra unit of the BJP. Hailing from a Brahmin family and a trained lawyer, he is now in the thick of the campaign for the assembly election in the state. Prachi Pinglay-Plumber managed to snatch a conversation with him in the middle of all the hurly-burly. Excerpts:

The BJP had in the Lok Sabha election gained by projecting a prime ministerial candidate. Why is it then shying from declaring a chief ministerial nominee?

Could it also be because the BJP does not have an influential leader with pan-Maharashtra appeal like Gopinath Munde?

It is not that we don’t have leaders. It takes a very long time, say 30 to 40 years, for leaders like Mundeji to be created. The BJP has several leaders in different parts of the state like (Vinod) Tawde, myself and many others who are in touch with people and are well-connected at grassroots. We are also getting good response wherever we are visiting. But strategically we are following a poll plan.

But wouldn’t the people like to know who the main leader is?

Our research shows that people would like to have a chief minister who is eventually nominated by Narendra Modiji. So once the BJP comes to power, he will nominate an appropriate candidate. And that is what people are leaning towards.

People are also disappointed at the last-minute split with Shiv Sena, which made it appear like it was a scramble for more seats and power. Could you have done it differently?

The split was not planned at all, so there is no question of whether we could have done it differently or earlier. We had decided to contest the election together but we had to accept the reality when the split was ann­ounced. However, let me also tell you that we have discovered an opportunity in this challenge. After long years, Maharashtra once again has a chance of forming a one-party government. It is good for the state and we’re confident of getting a majority.