'People Showed The Opposition Its Place' 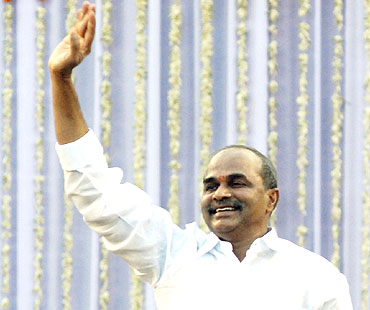 Y.S. Rajasekhara Reddy is a happy man as he prepares for his second term as the chief minister of Andhra Pradesh. The Congress under his leadership not only won 156 of the 294 assembly seats to form the government on its own in the state, but also contributed 33 out of 42 MPs to the UPA kitty, which proved vital for the formation of the government at the Centre. Excerpts from an interview with Venugopal Pillai:

What does this victory mean to you?

The people's mandate was clearly in our favour. Unlike 2004, when we had tied up with the TRS and the Left, this time we contested on our own while the opposition parties joined lock, stock and barrel with the TDP to defeat us.

Why do you think the TDP's 'grand alliance' failed?

Its sole intention was to defeat the Congress. In any alliance, there should be a sense of purpose, people's interest must be paramount. They lacked it, the people rejected them.

What's your stand on a separate Telangana?

The Congress stand remains the same. We are not opposed to Telangana....