Amidst the fuss over IIM fees, the government is quietly pushing inequity. A months-long probe by Outlook shows how the very poor are being short-changed on primary education. 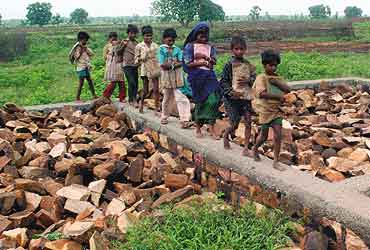 outlookindia.com
-0001-11-30T00:00:00+0553
It's unlikely that parents at Uba Paan are celebrating the proposed fee cut in the IIMs. In fact, in this tiny hamlet tucked away in the Jadol block of Rajasthan's Udaipur district, parents aren't even enthusiastic about sending children to school. Certainly, there were no students to be found in class here. But then, there was no school to be found either, not even the thatched hut that often passes for a school in rural India, on the wintry morning we from Outlook decided to get to Uba Paan's educational institution trudging through kilometres of uneven farmland.

Considerable effort from the helpful villagers did unearth a teacher though. A harried Bhagwat Singh whose excuse for playing hookey was "but I am not a full teacher, I am only a shiksha bandhu". It is the task of this "tenth-pass-from-open-school" to corral Uba Paan's variously aged children into a single class in a school with no building, and teach "all subjects", from Class I to V. Singh orders his wards to drag in two rickety chairs and a greying scrap of wood, his blackboard. And Uba Paan's Rajiv Gandhi Swarn Jayanti Pathshala is on.

Only a few of the 33 children enrolled in Bhagwat Singh's roster were actually present, though. Fewer still could write their names. And though he is supposed to teach English to Class V, their teacher confessed he couldn't write all his students' names in English.

And it gets even more absurd. Absurd because our government is pushing so vigorously to subsidise fees in the IIMs even as primary education, a Fundamental Right, is starving sick of funds. Even as 59 million children, by the government's own admission in 2001, are out of the classrooms. And here's the most pathetic part in the paradox played out through our lopsided education policy. While so keen to give equal chance to less affluent students to get a crack management education, the government is also quietly institutionalising a cheaper, inferior, parallel schooling system for the poorest children in the country.

Those huge ads from the HRD ministry proclaiming that "Quality elementary education is the Fundamental Right of every child" tell you little about this system. Yet, the truth is it's one quality for the rich who can afford private schooling, and another for the poor whose wards have little option than the dull pedagogic routine of government schools. And now, yet more inequity for the poorest among the poor—a second track system of government schooling under the euphemistically titled Alternative and Innovative Education (AIE) and Education Guarantee Schemes (EGS). These are for children living in "small and accessless habitations" as in Uba Paan and the stated target of the government is to enrol 1.22 crore children in such 'alternative' schools.

For two years now, free and compulsory education for all 6-14 children has been a Fundamental Right. The 'constitutional obligation' has forced the government to find its way to India's 'remote/rural/tribal' areas through cheaper AIE and EGS schools. These inferior schools can now be found in the poorest pockets of semi-rural and urban India. Needless to say, they will help scale up the country's education statistics. But to what intent?

In some states, all it takes to qualify as a teacher is a pass in Class vii. Once hired on short-term contracts, and variously called para-teachers, shiksha karmis, shiksha bandhus, shiksha mitrs, lok shikshak or guruji, they are paid much lower wages than their counterparts in mainstream government schools, and barely trained in teaching, if at all. They then take Classes I-V, typically with all the students huddled in a single classroom. If there is a room. Since infrastructural support from the government is minimal, there are few or no buildings or toilet facilities, and meagre teaching devices. 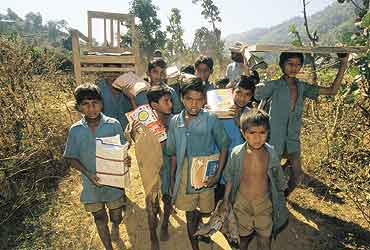 "Our education policy is legitimising social discrimination," fulminates Anil Sadgopal, professor of education at Delhi University. "The EGS and AIE are designed to promote inequity. They have no infrastructural support, want students to be taught by underqualified, underpaid, untrained teachers and are okay with having only one teacher for five classrooms." He says the proposed Free and Compulsory Education for Children Bill, 2004, that seeks to formalise a clear segregation of the education system by including AIE and EGS centres as integral parts of India's elementary schooling system, should be renamed the Cheap and Discriminatory Education Bill, 2004: "Clearly, the policy now is not to improve the mainstream formal school system but to set up multiple parallel tracks for the most deprived sections."

Still, isn't it better to have some sort of school, however insufficient, than to have none, especially in remote habitations?

It's a contention Sanjiv Kaura of NAFRE (National Alliance for Fundamental Right to Education) rejects outright. Article 45 in our constitution was the only one, he reminds us, that had a deadline attached to it: all children up to 14 years of age would be educated by 1960. "More than 40 years after breaking a constitutional deadline, talking of something being better than nothing borders on criminality," he says. Especially since these cheap, diluted options for education are not a temporary, stop-gap arrangement. "They are being turned into permanent solutions for educating the poor."

Observes social scientist Jean Dreze, co-author of the PROBE report, a comprehensive evaluation of India's schooling system, "Even if one were to agree that EGS and AIE schools are okay as initial ideas—providing some sort of schools temporarily where none existed—it is disturbing that such makeshift schools are getting institutionalised." 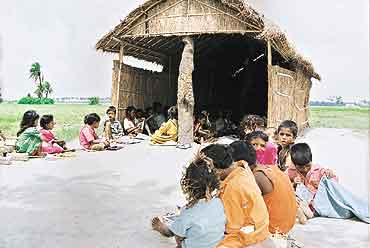 In Bihar's Muzaffarpur district, the target is to open 200 EGS schools in the current year, called Lok Shikshan Kendras. Officials in charge say 120 have already started, with 109 currently functioning. One such school was opened under a peepal tree in Khalilpur village last February. More than a year later, about 100 children attend the school now but it still hasn't graduated beyond a bamboo and straw hut, built on a small plot donated by the local landlord. "My students aren't protected from the heat, the cold or the rains," says a despondent Rakesh Kumar, the lok shikshak here. "There is no blackboard, and most of the students have had to buy their own books."

Karuna Karale's students in the three-class-one-room Bastishala school in Thane's remote tribal-dominated Wada taluka in Maharashtra are just as deprived. They study out of textbooks covered with paper three times over. Not just because the twig-and-leaves hut the villagers have put together often does not survive the monsoon, but also because these books would otherwise be in tatters. These, after all, are all the children have got from the government in the two years that the school has been active. "Everyday the children ask me when they'll get uniforms like those who go to regular schools," says Karale. "Just to keep them coming, I tell them the uniforms will come on August 15, and when they don't, I say January 26."

False promises have been a part of these 'alternative' schools ever since MP's former chief minister Digvijay Singh started them off in his state in 1997. Touted as "a pioneering initiative in the country...", the EGS schools were meant to be stop-gap measures to be later upgraded into regular schools. But there are still over 24,000 EGS schools in MP today. The government claims that enrolment in these schools is 100 per cent and attendance 90. 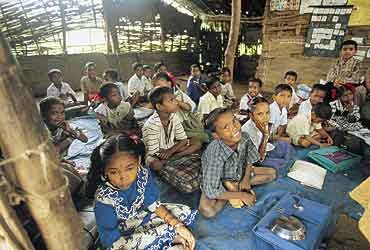 But one trip to Bhojka village in Sheopur district showed how hollow such claims are. A metal gong hung on a tree is the only evidence of activity. The said area apparently becomes a school when guruji makes a rare appearance and hits the gong with a block. The villagers call the place "kachde ka dher (garbage dump)." In Sawdi village, guruji was last seen in flesh and blood four years ago. The villagers don't even remember his name. So how does he get his salary, given that EGS payments cannot be released till the sarpanch certifies the teachers' attendance? "I don't know," says sarpanch Kashiram, "he probably forges my signature." In nearby Kerka, the EGS teacher does make an occasional appearance. "He comes whenever there are inspections," says a matter-of-fact Kerka resident, Inder Kumar. "Why would anyone come in every day through these slushy roads for Rs 1,000?"

The paltry wages isn't the only problem. A carpenter by profession, Ashok would rather send his sons to the regular primary school, but it's some distance away. So he sends them to the AIE school in Hyderabad's cpi colony, and regrets the choice: "Compared to the primary school, the teacher here lacks motivation. She doesn't take much interest because she never gets her salary on time." C.H. Padma, the 'volunteer' teacher at a similar alternative school in Shivajinagar, admits she began teaching here almost four years ago. She has so far received just two pay cheques: "Last year, I got a payment of Rs 3,600 and then some months ago I received Rs 6,300."

In Rajasthan, insecure shiksha bandhus constantly talk of a 'permanent' posting. Maharashtra's Bastishala teachers, who get Rs 1,000 a month, complain of often not being paid for months. It doesn't help that a lot of them are also at the mercy of local landlords. Karale in Thane's Wada taluka says that the local sarpanch refused to sign her attendance record all of last year. "He wanted half of my salary," she says. The problem is more acute in Bihar, where feudal attitudes refuse to fade away.

"Supervision by the sarpanch was meant to involve the community in the running of these schools. So that the teachers would be locally accountable," says Dreze. "But that can happen only where local democracy really works." Like what's happening in some pockets of West Bengal. On Gas Street in Calcutta's Razabazar slums, the AIE centre (Shishu Shikshalay Prakalpas in West Bengal) has two lady teachers teaching 20 children. The parents meet the teachers regularly, air their complaints, make suggestions. Most importantly, thanks to the school, many children are today off the streets. But even here, the handicaps are formidable: it's a very small room in a narrow lane, it's distractingly noisy, and has a garbage dump nearby.

"The fact is today we have to provide every child access to a school. We have to provide some school," says Sushil Chandra Tripathi, secretary, department of elementary education and literacy, HRD ministry. "Each and every corner of the country must have a school," he emphasises. But with such inferior schools, chances are none of these children will be making it to IIMs. A steep fee, then, will hardly be the issue.