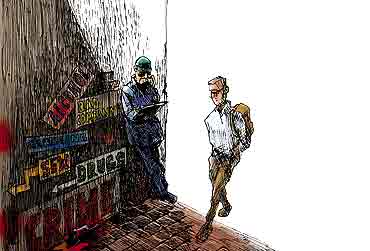 Vikram Singh says most already have some inkling but come to private eyes like him seeking evidence to confront kids with, anything to crack the pattern of emphatic denials and futile showdowns. Sachit Kumar, executive director, Globe Detective Agency, Delhi, lists some tell-tale symptoms in kids which lead parents to pros: "Over- or under-sleeping, a generally sozzled look, aloofness or aggression, decline in studies, spending too much time outside, rash driving, odd things found in their room or other erratic behaviour." What happens once the agency submits the report? "I've seen parents shocked, furious, helpless, speechless and sometimes breaking down in front of me," Singh says, adding "They say they can't believe their kids have gone so far, for they behave so differently at home." Adds Sachit: "It's a wake-up call which shows parents exactly where they stand."

As the parents of Calcutta-based Gautam Bakshi, 18, learnt. Vague about his whereabouts—he had to be "somewhere" at a specific time—and suspecting the worst, they hired an agency. The disclosure confirmed their fears. He'd been lured into drug-peddling by a woman friend. Though not an addict himself, he made money out of this parallel lifestyle with a car and other accoutrements.