In the latest front opened in the war, the LTTE has so far come out ahead 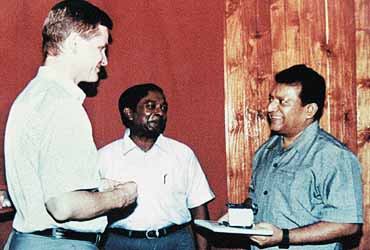 outlookindia.com
-0001-11-30T00:00:00+0553
Over the last two decades, the Liberation Tigers of Tamil Eelam (ltte) has earned the formidable reputation of being one of the world's most ruthless and efficient guerrilla forces. Now, in the last six months, it has demonstrated a hitherto unknown strength—international diplomacy. Indeed, the ltte has shrewdly exploited the peace process to comprehensively outmanoeuvre the Sri Lankan government of President Chandrika Kumaratunga.

Says Dr Paikiasothy Saravanamuttu, executive director at the Center for Policy Alternatives, "The ltte's been able to control the agenda of the peace process, initiating a political and diplomatic offensive that the government seems to be either unwilling or unable to respond to positively."

The turning point for both sides was the failure of the ltte's massive offensive in the middle of last year. Not only did it fail to recapture the Jaffna peninsula, it also suffered debilitating losses. Unable to face the dramatic increase in firepower available to the army after the Jaffna debacle, the ltte launched a propaganda drive indicating it was ready for 'unconditional' peace talks—but with foreign mediation. This was counter to Colombo's persistent rejection of any foreign involvement.

But under pressure from western countries and India, Kumaratunga caved in, accepting Norway as a facilitator. The ltte then demanded that the ban on goods to rebel-held areas should be lifted before the commencement of any parley. Fearing the rebels were back to their old strategy of playing for time, the government countered that these issues should be part of the proposed talks.

The government also wanted the ltte to agree to a time-bound peace process. After months of shuttle diplomacy, Norwegian envoy Eric Solheim negotiated a deal: the rebels were to stop attacks in the (Sinhala-dominated) south of the country, while the government was to lift the embargo on goods to the north and east, or the Tamil-majority territory.

On December 25, 2000, the rebels added a second "precondition". After declaring a unilateral ceasefire, it called on the government to match it, which was refused. During the ceasefire, the government troops launched a series of operations and captured areas close to Jaffna town.

The ltte's riposte was swift—it withdrew the ceasefire and demanded that the proscription on the ltte be lifted before peace talks could get under way. The government immediately launched a massive attack in the Jaffna peninsula. The opeation was a debacle—259 soldiers were killed and almost 800 injured in four days of fierce fighting. The harried government then announced it was prepared for a ceasefire; the rebels insisted on the proscription issue. The government rejected the demand, deadlocking the peace talks again.

The rebel manoeuvres have not only exposed the government's amateurish handling of the issue but now threatens its very existence. The Opposition is planning a no-confidence motion against the government in July; it wouldn't succeed were the Tamil parties to not support it. The government thinks peace talks can wean these parties away from the Opposition and also, thus, force the latter to rethink its strategy of toppling the Kumaratunga regime amidst expectations of a breakthrough. (Kumaratunga's coalition has a slender four-seat majority in the 225-seat Parliament.)

Says Dr Saravanamuttu, "The major problem for the government is the political equation in the south. This has to be seen in the context of the no-confidence motion as well; it would seem that the government is not politically secure enough to take the risk of un-banning the ltte and manage the fallout. It is in no position to take on the Sinhala hardliners in the government."

The next couple of months will see the focus shift away from the peace process to political manoeuvring in Colombo. But, rest assured, the ltte will soon take centrestage, as it has over the last two decades.