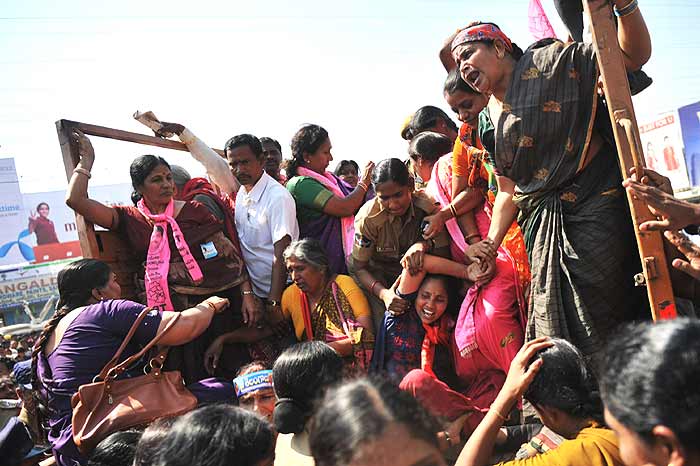 In a twist to the statehood movement, Telangana  leaders have borrowed a leaf from Mahatma Gandhi by launching a non-cooperation movement. Participants include students, teachers, caste organisations, ngos, women’s groups, psu workers and government employees. “This is the first time since independence that a non-cooperation movement is being launched on such a scale,” says Prof M. Kodandaram, chairman of the Telangana Joint Action Committee (TJAC). The movement kicks off on February 17.

With both Parliament and assembly in session next week, the movement is designed to hit the Andhra Pradesh government where it hurts the most, the state exchequer. Some features of this protest include non-payment of water and electricity bills, house and sales tax, boycotting the census, non-payment of toll, ticketless travel and employees signing registers at government offices but not attending to their duties.

Of course, it remains to be seen if the ordinary citizen is willing to make such sacrifices as the leaders of the movement expect them too. Cynics say forgoing salaries will be tough for many. And ticketless travel could lead to penalties, even time in jail. How many people will risk that, ask those who believe the stir will be short-lived.

For now, the Telangana Rashtra Samiti and TJAC say essential services like hospitals, electricity, water, fire, civil supplies would be spared but if the government bears down on the agitation, these too would be targeted. Addressing  sanitation workers of Hyderabad, trs chief Chandrasekhar Rao asked them to stop clearing garbage as a last resort: “The stink will see the CM and his cabinet run away from Hyderabad.”

Telangana ideologue K. Jayashankar says the idea of non-cooperation is a peaceful and democratic mode of protest where the functioning of the government will be affected. “In a submission to the Srikrishna Committee, former CM K. Rosaiah had stated that the per capita revenue of coastal Andhra and Rayalaseema regions is less than that of nine districts in Telangana. This means the non-cooperation movement will affect the inflow of revenue to the state exchequer and local bodies,” he explains. Accepting that the stir would cripple the financial system in the region, Jayashankar says that such agitations do not happen often. “And when they do, they cannot continue unless there is people’s support.” Jayashankar says the duration of the stir will depend upon the results.

Sircilla MLA K.T. Rama Rao argues that if the government uses ESMA against stirring employees, it might give further impetus to the movement.  “Non-cooperation will continue at various levels and we will wait and watch for reactions from the government,” says Rao. TJAC chairman M. Kodandaram says he expects MLAs and MPs to continue with the non-cooperation tactics in assembly and the Lok Sabha as well.

Meanwhile, there is great pressure on Congress MPs and MLAs from Telangana to support the stir.  Karimnagar MP from the Congress Ponnam Prabhakar says in a worried tone, “Ruling party leaders from Telangana are already feeling the heat: we cannot travel in our own constituencies without security. If the non-cooperation movement for Telangana gains momentum, the effect might be serious, and the Congress will lose face.”

Caught In Its Own Knots