On his new appointment as Director, Nehru Centre, London and his forthcoming titles 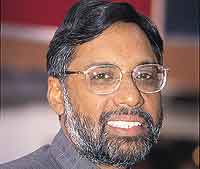 outlookindia.com
-0001-11-30T00:00:00+0553
Is your new posting a reward for translating the PM's poems?
I don't think the two are necessarily connected, but my literary interests could have landed me this job.

How is this different from your other diplomatic posts?
It is a cultural ambassador's post and this is the first time an ifs officer will head the Nehru Centre.

Was your last job as ambassador to Cyprus a punishment posting?
No, I greatly enjoyed it, and also managed to finish writing my magnum opus.

A sequel to Great Indian Middle Class?
No. Being Indian (to be launched by Penguin in April) deconstructs the many myths Indians nurture.

Aren't you afraid to be writing erotica?
No, I think it is an important aspect of Indian philosophy and literature, where the role of kama is crucial for leading a balanced human life.

Do you miss the P3P appearances?
No, I hear P3P is rip. I was part of it when it was alive.

The Tale Of Two Models