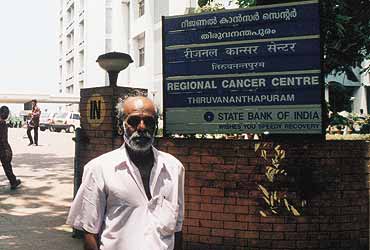 outlookindia.com
-0001-11-30T00:00:00+0553
While India has emerged as a preferred destination for multinational drug companies and foreign academic institutions for clinical trials of newly-developed drugs, uncomfortable questions are being raised about their compliance with guidelines governing good clinical practices.

Now, Johns Hopkins University, Baltimore, is making news in Kerala for all the wrong reasons. Its tie-up with the Thiruvananthapuram-based Regional Cancer Centre (rcc), a teaching hospital where patients from across the state and outside converge, has attracted government and media attention over allegations of unethical clinical practices and testing of a cancer drug banned in the US by the Food and Drug Agency (fda).

rcc researchers had been running clinical tests on a drug developed by the American university called M4N, the tetramethyl form of Nor Dihydro Gualaretic Acid (ndga), the active ingredient contained in an American desert shrub called chaparral. Native American Indians, as well as pharmacologists, believed the plant had anti-cancer properties. Early studies indicated that ndga, the compound contained in chaparral, was able to inhibit the growth of cancer cells in mice. But human studies proved inconclusive. The fda finally decided to remove chaparral from its "generally recognised as safe" (gras) list.

However, rcc doctors injected M4N, the derivative ndga, into 25 patients suffering from head and neck cancer over a five-month period starting November 1999. It was injected at a particular point on the tumour and studied under a microscope after the tumour was excised.

"The drug was administered as part of an experiment, and not as any treatment," rcc director and principal investigator in the clinical trials, Dr Krishnan Nair told Outlook. He described the drug tests as successful since the tumour had completely regressed in all but one of the 25 patients.

This contention is hotly disputed by rcc Radiobiology section head, V.N. Bhattathiri, whose petition before the State Human Rights Commission brought the drug trials out into the open and triggered a controversy that brought the collaborative venture between rcc and the Johns Hopkins University under a dark cloud. In his petition, Bhattathiri alleged that patients were subjected to trials that exposed them to toxicity from drugs that are banned by the fda. "Neither ndga nor M4N are approved for human use in the US," the petition pointed out. "These patients were awaiting surgery as part of the standard treatment for cancer. The surgery was delayed to inject them with the new experiment drug," Bhattathiri explained. "ndga has never come up for consideration by the fda. So how can it be banned?" Nair counters. He adds: "We have not tested on patients any banned drug as alleged. What we have used is not banned in the United States as alleged in some media reports."

Incidentally, the US authorities had earlier suspended all federally-funded research projects involving human subjects at the Johns Hopkins University in Baltimore following the death of a healthy volunteer on June 2. Ellen Roche, 24, succumbed to a drug administered to her during a study on asthma. The government blamed the institution's investigators for not being alert to the adverse symptoms developed by the volunteer during the drug trial.

A key advantage in Indian hospitals is the easy availability of a large population of patients displaying a broad spectrum of conditions. Collaborative ventures between Indian hospitals and foreign pharmaceutical industries and academic institutions ensure that the lab-to-market journey of a new product is achieved at low cost and shorter duration.Moreover, strict regulatory and ethical controls in their own countries are pushing many European and US-based pharmaceutical companies and research organisations to look at India and other third world countries as cheaper and less restrictive alternatives.

It is learnt that the Thiruvananthapuram experiment was shrouded in secrecy. Bhattathiri, who has served with the rcc for 16 years, stumbled on some case files. A particular sentence caught his attention. It read: "The drug injected area shows squamous cell carcinoma." Weeks later, he came across a news item announcing a new drug, developed jointly by rcc and Johns Hopkins University, that had been proved effective for treating certain cancers. Bhattathiri realised that the case files he had stumbled upon, in fact, related to the highly confidential human trials of M4N. When rcc authorities stonewalled Bhattathiri's queries, he approached the Human Rights Commission.

One other entry in the case files that confounded the radiotherapist was the reference to a second drug, G4N. "This was a mystery to me," Bhattathiri admits. "I could not figure out what 'G' stood for".

Independent inquiries by Outlook has resolved the mystery. G4N is a water-soluble derivative of ndga obtained by substituting methyl with glycynil. M4N and G4N were injected into the patients during trials. Both drugs were developed by Dr Ruth Huang, professor of biology, along with her colleagues in the chemistry department of Johns Hopkins. The university applied for and obtained patents for the two drugs.

A major transgression by rcc authorities, not mentioned in Bhattathiri's petition before the Human Rights Commission, is that the M4N and G4N clinical trials did not abide by the protocol issued by the hospital's ethics committee. Ethical clearance was granted for a study on the use of M4N and G4N only for pre-malignant oral and cervical viral cancers. The rcc investigators took the experiment beyond its mandate and injected the drugs on full-blown tumours in the case of as many as 21 patients.

The second clearance obtained from the ethics committee in June 2000, however, permitted clinical trials even on subjects with advanced oral and cervical malignancy. The details of these tests have not been divulged by the rcc.

M. Gopal, 63, a resident of Tiruppur, Tamil Nadu, arrived at rcc in November 1999 with a case of tongue cancer. On January 12, 2000, he was recruited for the ndga trial and, two days later, received his first injection of M4N. He was injected with G4N three hours later. On January 18, despite a severe asthma attack, Gopal was wheeled into the operation theatre to have his malignant lesion excised. He was discharged. In June 2001, 15 months after his drug injections, Gopal developed a second malignancy. A fresh lesion had appeared close to the site of the original tumour. "I thought the mouth injections were part of the local anaesthesia before surgery," says Gopal.

Twenty-five patients had signed the consent forms of the institute. But an illiterate patient's signature or thumb impression is a symbol of his innocence. It cannot amount to informed consent. Besides, the Helsinki Declaration of 1975 that morally binds the medical profession to a code of conduct, forbids drug tests on patients afflicted with the disease targeted by the same drug.

The proliferation of multinational-driven projects at the rcc (as well as medical college hospitals in the state) has become a source of concern within the medical fraternity itself. The financial tie-ups between academic institutions like the rcc and foreign drug companies is marked foremost by a lack of transparency.

The rcc's annual audit statement for the year 2000 put the income from foreign projects at a laughable Rs 600. The money coming in from overseas agencies finds its way into a separate "project cell" and is handled exclusively by the principal investigator for the project. There is no accountability whatsoever, either to the government or any monitoring agency. There is growing apprehension that the fundamental objectives of research are overlooked in favour of executing projects for mncs who come to India because drug trials are cheaper.

Chief minister A.K. Antony has promised a full-scale probe into the drug trials. Meanwhile, rss authorities are counting on Johns Hopkins to do the talking. Dr Huang and a colleague are scheduled to arrive in Thiruvananthapuram on August 2 with a briefcase full of answers.