Path Of The Wheel

Nilekani culls from wide professional, social experiences to examine India, its polity and a hopeful road ahead 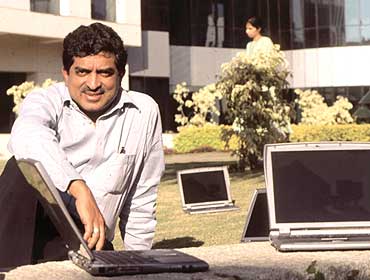 Imagining India: Ideas For The New Century
By Nandan Nilekani
Penguin/Allen Lane Pages: 520; Rs. 699
This is not a billionaire’s ‘here’s-the-secret-of-my-success’ book—even though Nandan Nilekani couldn’t resist putting his face on the cover. If you want to know how Nilekani, co-chairman, Infosys Technologies, became a successful entrepreneur (even if an ‘accidental’ one, as he puts it), don’t buy this book. But if you want to know what one of our brightest and more successful business leaders thinks about our country, how it works, what makes it tick, and what can make it work better, read on.

This is an inspirational, optimistic book that makes you more hopeful about India. It rejects our chalta-hai nonchalance and celebrates the Infosysian can-do spirit. But Nilekani regrets that "in our politics we are yet to tap into our new language of hope."

Where do the book’s ideas come from? They reflect the aspirations and experiences of an urban middle-class professional, who went to a small-town English-medium school, made it to an IIT and benefited from the IT boom. His heroes are Rajiv Gandhi (the politician who understood computers), Sam Pitroda, N. Seshagiri, N. Vittal, Sudhir Kumar, Ravi Narain, C.B. Bhave, N. Gopalaswamy, Rajeev Chawla and others who pioneered India’s electronic revolution.

Nilekani’s ideas often have their source in his multitudinous interactions with academics, policymakers and persons in public life as a member of the Bangalore Agenda Task Force, National Knowledge Commission, Jawaharlal Nehru National Urban Renewal Mission review committee, National Advisory Group on e-Governance and the IT Task Force for Power. He also draws on his civil society engagement with activists like Ramesh Ramanathan of Janaagraha.

Nilekani’s IT background and his involvement in public policy and civil society activities shape this book. So the focus is on governance and bureaucracy, education and infrastructure, energy and environment, urbanisation and social security. Nilekani makes good intellectual use of his membership of these committees and generously acknowledges the influence of scholars like Andre Beteille and policymakers like Montek Ahluwalia and Vijay Kelkar on his thinking.

Nilekani is a great learner. Hence, he has been able to write a book that educates. The most stimulating chapters are the ones on urbanisation, education and infrastructure policy. It is a measure of India’s progress this past decade, thanks to the IT revolution and the services economy boom, that few today would challenge his views on the importance of the English language. I recall the rebuke I received from Hindi fanatics (including Mulayam Singh Yadav) as recently as 1995 when, as editorial page editor of The Times of India, I wrote an editorial entitled ‘English is an Indian Language’. Nilekani demonstrates why, and the economic and social importance of it.

Nilekani is a liberal and a renaissance man. He not only shares the values that define the Indian republic, he embodies them. He offers a convincing and balanced perspective on the future direction of public policy in India. He recognises the important role the government will have to play in areas like infrastructure, education, healthcare and law and order, and pleads for greater liberalisation in other areas where enterprise is still being held back. His economic agenda is a familiar one and is inspired by the policies unleashed by Manmohan Singh.

Surprisingly, one institution of governance that escapes his attention is the judiciary. Is it because Nilekani has never had a brush with the law, given Infosys’s good corporate governance record, or because he wants to play safe? New ideas for the reform of our judiciary and legal process would be a key element of any agenda for the 21st century.

I have only two minor criticisms of the book. First, the title. Nilekani’s publishers, and his intellectual companion in the making of this book, Ramachandra Guha, would surely have known that Ronald Inden wrote a highly acclaimed book two decades ago called Imagining India. So why repeat? Second, the indexing and referencing are patchy. To offer just one self-serving example, footnotes 35 and 36 on page 164 refer to an essay of mine on regional business and regional politics, but in the text Nilekani attributes the views to political scientist Atul Kohli. Ah, well.