Indian teenagers are catching up with the global culture of science. It may be slow, but it is spreading nonetheless. 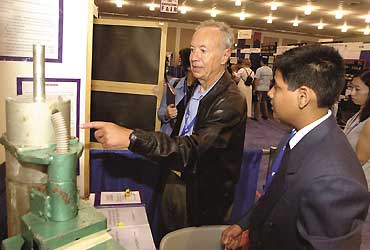 outlookindia.com
-0001-11-30T00:00:00+0553
The din rises inside San Jose's busy Convention Center, barely a shadow away from the headquarters of some of the biggest names in global infotech. The voices are young—schoolchildren from around the world have gathered at the heart of Silicon Valley to compete at the 52nd International Science and Engineering Fair (isef). The noise is deafening as 1,200 excited children are busy in animated conversations, each trying to make a point. Next to each one of them is an impressive display of projects on topics ranging from computer graphics to sea exploration. The stream of visitors includes a large number of Nobel laureates. And the proud faces of the accompanying parents only tell the story.

Though developed by high school students, the projects represent significant research works that rival efforts made at even post-graduate levels. More "foolproof" methods to decode dna, gloves that translate sign language to a computer, means to reduce harmful fuel emissions through additives...all hi-tech, all created by school-goers. And a good 10 per cent of them have even applied for patents!

In one corner of the gigantic hall stands Yash Vasant Joshi, 14, who has just come back from a breakfast meeting with Intel chairman Andy Grove. "He doesn't speak much but he knows all about my project," says an overjoyed Joshi, one of only five participants to have "impressed" Grove. Joshi converted a bicycle pump into a machine to reprocess plastic waste at places of generation. "The litter of plastic bottles in Mumbai, especially the Juhu Chowpatti area, made me think," he says. And with a little help from his father who runs an industrial machinery manufacturing unit, he's close to a breakthrough that may address a large part of India's pollution problem. He has already applied for a patent.

His reward: the Intel Achievement Award worth $5,000 and a $500 prize in the engineering category. What's more, an American company has shown interest in prototyping his machine. Naturally, this Xavierite is ecstatic. Says he: "I feel like Sachin Tendulkar after a century." Tracy Koon, director, corporate affairs, Intel, chips in: "This kid has a future. We can all see it loud and clear."

The isef, sponsored by microprocessor giant Intel, is the world's only international science fair representing all life sciences for students between classes 9 and 12. Since 1999, when India began participating, it has won honours every year. But 2001 has been the best so far for Indian students. The Indian camp of one two-member team and two individual participants won category prizes and also three of the eight special achievement awards. And with 43 competing countries with over 1,200 students vying for the honours, the wins have only been sweeter.

At the other end of the hall, there's celebration in another camp—hats are being thrown in the air and the deafening sound of whistles is bringing the hall down. Centrestage are two tall figures—Bharat Suresh Mhatre and Amit Kiran Sowani, both Class XII students from Mumbai's Ruia College. And the reason for their joy—the two youngsters have just won the special achievement award, making them richer by $5,000 over and above the $500 they won in the environmental sciences category and another $500 for research and development. An Indian company has even tested their project's commercial viability. "Please don't ask me how I feel," says a restless Sowani who is already busy thinking of ways to spend the money.Mhatre, more practical among the two, says: "We will have to improve upon the shortcomings of the project which we've discovered after talking to experts here." Their project centres around a new and efficient method of recovering oil spilt in the sea. Their two models also helps in degrading the oil that cannot be collected. They too, are awaiting a patent.

But the best effort may have come from Ruchira Bajpai who, in little-known Shaktinagar, about 200 km from Varanasi, has developed a "medicine" to lower hyperglycemia (blood glucose level) using custard apple seeds. This teenager, who aspires to be a doctor one day, received very little help and guidance for her project. Her secret—the wide usage of custard apple seeds among old people in her town. She applied through a newspaper advertisement for the contest and went it all alone. Bajpai returns with a $1,000 award in the biochemistry category and a second place award from the US Endocrine Society. Says she: "I have to take the project to its end. These awards have only strengthened my conviction that I am on the right track."

Indian students can perhaps take a pat on their backs for the wins but at $13,000, it was minuscule compared to the $3 million that was on offer. Clearly, the culture of science has to spread much faster and deeper among the young. But till that happens, we'll have to be content with these small trickles of happiness.